Witty, Charismatic, and Irresponsible. Goodwin on the surprising loveliness of raw talent and a life lived honestly

The following is a guest post by Robyn Goodwin

I’ve been unemployed for five months now.  I spent time visiting family, did a stint in rehab, and then went to Maine on vacation.  Upon return, I was tanned, toned, and balanced, a combination that has eluded me for years. I can’t blame my unemployment on a mass corporate lay off or my being crazy; I was canned for going on an interview.  I’d held down a job since I was 15 years old and paid my way through college and graduate school while working, so, when I was fired I mistakenly figured the universe had something better for me.  What I failed to realize is that things have changed since I last looked for work: I’ve grown up.  The last time I’d sought a career, Bon Jovi had long hair, and I was fresh out of college, a cute blonde with no experience, but an outgoing personality yet to be diagnosed as bipolar disorder. I nailed interviews because the interview was never about me.  People like to talk about themselves, and I was a good listener.  When the firm offered me the position, it was noted I was a wonderful conversationalist.  Of course I was, I hadn’t said a word.

At 47, I can’t call myself middle-aged, because it’s a little more than middle. I missed the technology boat, growing up with Tetris only.  I was at my best answering phones, filing, and smiling at summer associates.  And then I started my own business.  I made money for 15 years until the market crashed, and I was forced to look for a job.  I received an offer with a non-profit.  Then I was fired–two years older, still trying to screw a square peg into a round hole.

I’m attending too many AA meetings. I go to the 12PM group where it’s standing room only.  These are sober, intelligent people who after making amends, are the most ethically sound beings I’ve met.  My head is exploding trying to be ‘rigorously honest’ while seeking employment. Resume words are meaningless.  What does exceptional, superior, and interface really mean?  Show me multi-tasking, and I’ll show you a sober woman trying to navigate the Internet, find a job without selling her soul to the devil, while a bottle of Argentinean white wine is flexing his muscles.  My friends spend hours proofreading my work so I can tell my future boss how great my editing skills are.  I’ve been to eighteen job sites.  My resume looks good, but I have to get past the lion at the gate, the one who screens the applications.  I use words I’ve been taught to seduce the lion: perfectionist, organized, and industrious.  If I could just get an interview and talk about books.

It’s my turn to make the coffee at the meeting.  Never mind my eyes are glazed over from applying for jobs.  For those of you not privy, not only do you have to upload a resume and cover letter, but also fill out an online application that takes an hour per application and God forbid, if you forget to press save at the end of each page, you lose it all.  I’d written nothing short of award winning poetry, and was reduced to “see above”, after forgetting to save my work.

When I wasn’t getting a response from my “responsible words”, I decided to tell the truth.  The next time a recruiter asked me to describe myself in 3 words, I said, “witty, charismatic, and irresponsible,” knowing I’d just eliminated myself from the ranks of desirable candidates.

The great thing about AA is there is no lack of humility.  Ross walks into the room wearing plaid shorts and a baseball cap.  He looks resigned.

“I know how you feel; I just reduced myself to 3 words, witty, charismatic, and irresponsible.”

“I’m a drunk, have the ability to hold a grudge forever, and need transportation assistance until my felony is reduced.”

Ross had a career in human resources.  He was at the top of his game when his addiction drove him literally off track.  “We don’t stand a chance in this market,” he said.  “This is karma.”

I hoped it was his, not mine.

Things have become too perfect.  When the machine is spitting out nothing but Harvard MBA’s, the rest of us who are creative, imaginative with a side helping of crazy, are left out to dry.  This new system of finding employees eliminates the untrained, yet not unintelligent; people who are witty, charismatic, and yes, sometimes, irresponsible.  I’m not saying resumes and screening a surplus of qualified candidates doesn’t have value, it’s just that this efficient method filters out raw talent.  A perfect flower arrangement lacks character.  The machine can’t detect determination, persistence, and enthusiasm—which have defined my life.  The machine will never be able to determine that ineffable magic called chemistry, when against all odds, something fresh and delightfully unexpected happens from taking a risk.  The riches only happen between people not machines.

What is my purpose?  I’m back to that question.  Am I a Kleenex to be used and thrown away, a pebble in a shoe, a rainbow in the dirt, a drunk worth saving? I don’t know, but something is lost in the not knowing.  This is who I am: witty, charismatic, and irresponsible–not your average bouquet, but a surprisingly lovely arrangement. 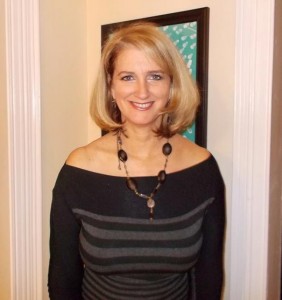 Robyn Goodwin received her MFA from GMU in 2000.  She was the Heritage Award Winner and her short story, “Watershed,” was selected by Sherman Alexie to appear in Scribner’s, Best of the Writing Workshops.  She’s currently working on a non-fiction book called, “Sweeping Beauty, Tales Of Women Who Clean Up After The Ball.”  She’s the mother of two delicious not-so-little boys.