Wearing the Feminist Badge: Final Words From Our Outgoing Editor in Chief

Last fall, my sister sent me a link to a posting on a website called Imgur (pronounced Im-ih-ger). I don’t remember what the post she sent me was about, but I do remember how I felt I had found a sort of window into the internet. With a swipe to the left or to the right, I could explore all the “most-viral” images on the internet for that day, often accompanied by stories or shared experiences from various Imgur users themselves. Feeding off of the popular, user-generated website Reddit, Imgur focuses on community, with users voting through “upvotes” or “downvotes” what material makes it to the front page of the site.

What one will most commonly find on Imgur is pictures or videos of adorable animals, a funny (or not so funny) meme, a tutorial for how to make the best pepperoni calzones. One can browse the site without ever making a profile or username, and this is what I did for some time, visiting the website through its phone app when I had a spare moment in a waiting room or in line at a store.

I was in bed checking the site when I came across a post that has given me a sizeable amount of unease for the past several months. In it, a group of young women hold up hand-written signs declaring why they don’t need feminism. Their reasons range from, “because I believe in equality and not in entitlements and supremacy,” to “I respect men. I refuse to demonize them and blame them for my problems,” to “I am an adult who is capable of taking responsibility for my own actions.”  One can see why I immediately created a username and began commenting on this post like my life depended on it. 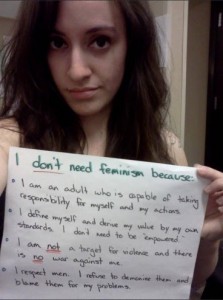 What I most wanted to point out was that none of these young women seemed to have any idea of what feminism actually is. Somehow, the idea of equality for women has become tied up with these misconstrued notions about the domination of men, the rejection of personal responsibility, and a culture of victimhood. I can’t say how this transformation took place (it seems to have something to do with tumblr, which is another content-sharing, online community, but I can’t dive into that hole right now), but the fact that there are women out there who outright reject the title of feminist is appalling to me, especially when these women so clearly are feminists themselves.

Equality is the bottom line of feminism. You can respect men without also demonizing them (I do it all the time!). Of course you are a capable adult; you can thank the generations of women who fought against the infantilization of our sex for being able to publically declare such a thing. These young women, who took to a public forum to proclaim their independence, personal responsibility, and strength, are utter and complete products of the waves of feminism that have been crashing against American culture for the past 200 years.

The issue is, however, these women don’t know that. And, they shy away from the “feminist” or “feminism” terms. These words have become tarnished, covered in the muck of misandry and fanatical, misinformed rebuttals. I spoke about this in my last blog piece, where I mentioned how I had to combat these misconceptions amongst my own family members, but the problem with the young women on Imgur is even stranger to me, mostly because they are feminists. Reluctant as they may be to wear that badge proudly, it is still tacked onto their bodies somewhere, albeit under layers of ignorance and/or confusion.

Beyond the problem of being unwilling to accept the feminist title, these young women are spreading the dangerous idea that women have reached equality in the US and in the wider world. What they are saying, by rejecting the mantle of feminism, is that there is no more work to be done. They are turning away from the gang rapes that happen with stunning frequency in India and elsewhere. They are looking past the millions of women who are unable, for any number of reasons, to make choices about their bodies and when or if they have a child (or how many). They are saying, “okay” to the overwhelming number of rape kits that escape DNA analysis. They are saying: If you are not me, or like me, you do not matter.

What is most important for these women to understand is that it doesn’t matter what you call yourself (though wearing the feminist badge like a crown would be a welcome fashion statement). What does matter is that, if they see the rights of other women (of other people!)  being challenged, though theirs may not be, it is important for them to say something, to do something, to recognize the wrong where there is wrong and confront it.

There’s a fear that goes along with defining oneself as part of a certain cause with perceived expectations. We prefer to live as sketches, erasing and redrawing the lines of ourselves when we feel threatened or uncomfortable. But, I would argue that the young women on Imgur would have to do very little revising to find that they fit into a feminist way of life. And that’s all I wanted to say to them, and to our readers: Like it or not, you’re a feminist. Now, go out there and own it. 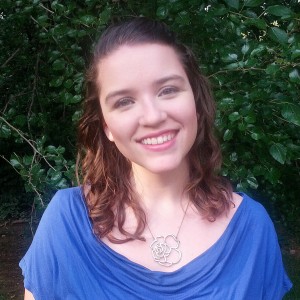 Michele K. Johnson graduated from George Mason University with her MFA in poetry in 2014. While pursuing her degree, she taught Creative Writing, Literature, and Composition at the university, and served as Editor in Chief of So to Speak. Her work has been featured or is forthcoming in the Ampersand Review, the Ucity Review, OVS Magazine, THRUSH Poetry Journal, and elsewhere.