To Whom it May Concern | by Carolyn Butcher

When you interviewed me for a job at the newspaper, I remember making you laugh. I thought it had gone well, but you gave the job to my best friend, Anne, because she had a car and I did not. A few weeks later you called me back and offered me a position as your “personal assistant” on the understanding that I would move into the newsroom at the first available opportunity.

That turned out to be when you fired Anne.

1969, a year into the Irish Troubles, and my first week working for you. We travelled from London to see our local regiment in action on the streets of Belfast and Londonderry. Did you take me with you to make yourself look more important – the editor with a p.a.? Because you could not take another reporter or they would want to write the story?

On the overnight ferry home, I remember dressing carefully in my cabin before dinner wanting you to want me. Why? Because you would be a conquest. All my friends had schoolboy boyfriends, but look what I can get: a real man, nine years older than me, the editor of a newspaper, my boss. I was so naïve. Couldn’t you tell? When we sat together talking and you said you wanted to kiss me, I was thrilled. I felt victorious. I had never been kissed before and I was 18 years old. I felt reassured. I must be worth wanting after all because look who wants to kiss me. I said fine, but I will not sleep with you, and you cracked up laughing. You said I was beautiful. You said you just wanted to spend some time with me.

Then came the beginning of the end.

You said it had to be a secret. None of my friends could know, no one back at the newspaper… no one. Did it occur to you that you were isolating me? If I couldn’t tell my friends about our relationship (and we weren’t even sleeping together at that point), I would have to drop them. Which I did.

Pretty soon you were the only friend I had. Of course, we socialized with YOUR friends.

The first time I met John and Jane, we were nearly at their house when you said offhandedly: “Oh by the way, Carolyn, I told them that your name is Sonia.” I am sure I protested, but you convinced me (as if the reason were obvious) that it was too much of a risk; that one of them might call up the newsroom and ask for me and then everyone would know we were having an affair. Looking back I realize that this was obsessive possessiveness. You were like a rich man buying a stolen masterpiece to put in a secret vault. The satisfaction is in the ownership.

Later, you drove me to Scotland to meet your family. We stayed in a bed and breakfast as Mr. and Mrs…. (my wearing a cheap ring from Woolworths). But just as we crossed the border at Carter Bar you said that you had told them my name was Barbara. Sonia, Barbara… you did not even give me the autonomy to choose my own fake name.

You took away my identity. I remember incidents:

Another weekend at John and Jane’s house, she was sitting on his knee after dinner and I was envious of the demonstrative affection. You beckoned me over and I was thrilled – assuming that you wanted me to sit on your knee. But when I tried, you pushed me to the floor roughly and said: “NO [inferring, you idiot], bring me my cigarettes.” I quickly fetched your Gauloises from the table and blamed myself for being such a fool in front of friends; for misreading what you wanted. I felt shamed, stupid, embarrassed, humiliated and hurt, and clamped my jaw to stop the tears from rising.

I knew you weren’t treating me well, but I had no one to talk to about it even if that idea had occurred to me, which it didn’t. I remember once saying that I had been thinking about breaking up with you and you got very angry and asked, “so why are you still here?” I figured you must be right. I was still there. I couldn’t bear the thought of how empty my life would be without you because my mother had told me that once I was no longer a virgin no man would ever want me. I would be a used woman. I had absolutely no one else in my life. You had seen to that. Loneliness seemed worse than staying with you.

So I stayed even though you never once told me you loved me.

Then there was the sex. Why didn’t I go to a doctor or a family planning clinic? The answer is that I didn’t know how to go about it and I was embarrassed. You could have helped me, but you didn’t because you said your religion forbade contraception. So no condom, only withdrawal, for more than two years! You said it wouldn’t be a problem if I got pregnant; that you would not let me have an abortion but would take the baby and raise it. (I of course assumed you would marry me, but now I feel confident you would have done no such thing.) Every month, sitting on the toilet, I made a bargain with God. I begged Him to start my period even if it meant making me infertile. And guess what? Ten years later my prayers were answered. I had to have infertility treatment in order to have babies. There were three years of humiliating inspections and treatments and when I did conceive I had to spend months in bed in order to stay pregnant.

Can I blame you for that? I think I will.

The first time we had sex I said NO, but I think I knew it was inevitable. I felt as if I had no will of my own – you had destroyed that. Anyway, I said NO, but you told me that we had to do it, that it was for my own good. I remember your pinning my arms above my head with your hands on my wrists. I knew nothing. I didn’t know it would hurt the first time. In fact, I was in terrible pain afterwards; you had given up trying to break me. The next time, I gritted my teeth until my hymen broke.

So much for romance.

Then there were the beatings. I have forgotten the smaller incidents, but I remember the biggie. You had moved into a house that you shared with another guy. One evening you called me, angry, because you had had a frying pan fire in the kitchen and wanted me to come over and clean the ceiling and the walls. Of course I came over. I fix things. I cleaned while you sat “working” in the living room. But the ceiling wouldn’t come clean and it had to look good for when your roommate came home. I found some paint in the garage and repainted the ceiling by myself. I don’t remember your being grateful, but because I was unbearably tired I got angry and said something. I don’t know what. Suddenly you were in a rage and from out of nowhere you hit me very, very hard on the side of my head and to my astonishment I landed on the other side of the room. I didn’t blame you. It was all my fault. I shouldn’t have got angry. I should have clamped my jaw, kept my teeth together and not said anything.

I’ve had tinnitus in one ear ever since.

I think that is all I want to remember. I hope that I am the only person whom you treated that way, but it seems unlikely. I used to think that it was absolutely possible, that there was something about me that made you behave that way, that felt at fault for not being loved by you, that felt unworthy of being treated well.

In closing, I want to thank you. Thank you for not wanting to marry me because if you had proposed to me, I would have said Yes. 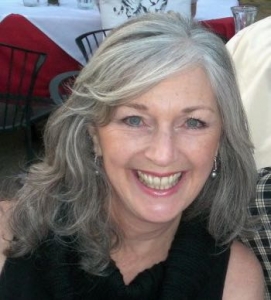 Carolyn Butcher, Ph.D., is a writer living in Santa Barbara where she teaches critical thinking through literature at Santa Barbara City College. Her memoir work has appeared in several online and print journals and, most recently in last year’s anthology Unmasked, Women Write About Sex & Intimacy After Fifty, edited by Marcia Meier and  Kathleen Barry. In addition, she has read her personal essays at several performances of Speaking of Stories at Center Stage Theater in Santa Barbara.