The Way of an Unlikely Feminist 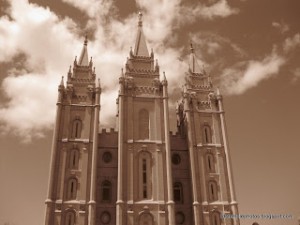 At the age of forty-five, my devotedly Catholic maternal grandmother gave birth to her thirteenth and final child, a girl. Less than a year later, after being obliged to marry my father because it was deemed the “right thing to do,” my seventeen-year-old mother gave birth to me, the first female grandchild. She returned to high school in the fall as a senior, but did not graduate with her class.

Four years later found me and my mom, divorcée and recent convert to the Church of Jesus Christ of Latter Day Saints, in northern Utah—two thousand miles away from the small Pennsylvanian town of my birth, away from the gossip and the stares, both pitying and disapproving. A young returned LDS missionary caught Mom’s eye not long after our arrival, and three months later he became my step-dad.

At this time, members of the LDS church, which has a long and storied tradition of being led exclusively by old white men, accounted for almost four-fifths of the state population. Saying there is a church on every corner falls well below hyperbole—I’m sure they outnumber Starbucks locations in Washington.

With a background such as this, I have no business being a feminist. I didn’t even hear the word until I started college.

I remember sitting in Young Women’s (once you turn twelve, the church separates boys and girls into their own Sunday school classes) as a teen, listening to the teacher tell us that to enter the highest level of heaven—the Celestial kingdom—we needed to marry (preferably a returned missionary) and raise a family. I looked around at the other girls, smiling beatifically and nodding in unison, clutching their monographed Book of Mormon tote bags, and thought, What if I want something different? Having witnessed during visits the cyclonic chaos of my grandma’s modest brick house, its wooden floors pounded into submission by so many pairs of feet; heard repeatedly about all of the missed opportunities (e.g., a college education) and struggle endured by my mom because of early pregnancy and custody battles; and missed out on much of my own childhood taking care of three younger half-siblings, finding a husband and having children wasn’t exactly on my list of priorities.

Instead, after turning eighteen, I got the hell out of dodge and reversed the two-thousand mile trip to attend Penn State. I discarded organized religion like an ugly sweater bequeathed by a well-meaning relative that had never fit well to begin with. I drank tea and coffee and alcohol. I smoked sour apple-flavored hookah. I wore shirts that showed my shoulders and my cleavage. I had sex, way more than once. It was scary and exhilarating and nerve-wracking and mind-numbingly, toe-curlingly glorious. Above all, it was my choice.

I signed up for the Introduction to Women’s Studies course because I’d heard it was a tough class, headed by a formidable female professor, and I craved the challenge. Jackie, feisty and flaxen-haired, opened my mind and poured in the finely distilled words of Virginia Woolf, Elizabeth Cady Stanton, Charlotte Perkins Gilman, Simone de Beauvoir, Betty Friedan, Kate Chopin, Audre Lorde, among countless others, and they swished and swirled in the depths of my consciousness, forever shifting the way I perceived and interacted with the world. I graduated college a year early with a minor in the subject.

More than exposing me to new and diverse female voices and perspectives, my Women’s Studies courses provided a lexicon for naming those phenomena on the periphery of my growing awareness and a framework through which to analyze and dissect their causes and effects, not only in my personal experience, but also in society at large. Patriarchy and objectification and oppression and double jeopardy and gender roles and marginalization became conversational focal points and were suddenly everywhere I looked, although they had always been there. Watch any beer commercial, and you’ll see what I mean.

Unfortunately, immersing myself in the world of feminist literature and discourse did not save me from falling victim to dysfunctional and emotionally abusive relationships in my early twenties, willfully trading my innate ethos for validation of my worth in even its smallest measurement. Creating boundaries in my relationships, romantic or otherwise, and expressing my truth could not be intellectualized and parceled in a pretty theory—they required action, a birthing into being, and continuous effort and practice.

I’m twenty-seven now. With no husband, no mortgage, and only two canine children, my life looks very different from my familial female role models’ lives. Based on social media and anecdotal evidence, I’m also fairly certain I’m the sole member of my high school class who isn’t married and actively procreating. I have a master’s degree. I’ve lived and traveled around the world on my own. I’ve walked across an entire country. This way of being is not better, or worse; it’s just different. And it’s mine.

It’s important to recognize, though, that my feminist ideology and freedom came with a price, paid by all the women who came before me, including my mom and grandma, who were held hostage to their respective time periods and places in society, buffeted by circumstance and cultural dogma. I realize now that the path toward feminism (which really should be termed “humanism”) involves remaining open to growth and connecting with how my decisions and actions make me feel—if they’re moving me away from, or bringing me closer to empowerment and the highest version of myself.

I’m still a big tea drinker, with the occasional cocktail or two at social gatherings. Hookah smoking now happens maybe once or twice a year. My closet has plenty of form-fitting V-necks because wearing them makes me feel confident and sensual. And casual sex partners dwindled to zero a couple years ago when I finally embraced that I’m just not a casual person, and I enjoy the act most when there are real feelings involved.

Someday, I might get married. I might get pregnant. I might get a cute little house with wooden floors that I’ll decorate with vintage book covers and treasured quotes and quirky items I’ve collected while traveling. Or I might not.

I have nothing to prove.

Kecianne Shick is a graduate of Johns Hopkins University’s MA in Writing program. An independent writer, editor, and budding adventurer, she currently works at City Weekly Newspaper in Salt Lake City, Utah. Her website,  www.pickingthefig.com, is a growing compendium of travel stories, philosophical ponderings, and advice for taking action in one’s life.

8 thoughts on “The Way of an Unlikely Feminist”