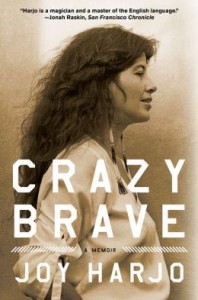 What Joy Harjo has done through Crazy Brave: A Memoir, a heartbreaking and unflinchingly honest mural of her life story, is what sportswriter Paul Gallico described when he wrote, “It is only when you open your veins and bleed onto the page a little that you establish contact with your reader.”  A poet and musician, Harjo guides the reader on a journey, some parts non-linear, through myth, mirth, and survival, from pre-birth to Harjo’s salvation through poetry and art. She’s strips down, opens a vein, and bleeds onto the page.

Reading Harjo’s memoir was for me a sort of homecoming.  I grew up in Muskogee, Oklahoma, not far from the towns of Tulsa, Tahlequah, and Okmulgee, which factored into Harjo’s early years.  I, too, was born to a mixed-blood mother, though my family is Caddo.  Harjo and I share the landscapes of the southern planes that formed and created us.

“Harjo,” is a Muscogee/Creek word for “reckless in battle,” or “crazy brave” and gives the memoir its title. Harjo structures the book using the American Indian concept of “four directions,” common among a number of tribes, and which symbolizes the totality of the universe.  East represents the direction of “sunrise” and “beginnings”; North, the direction of “difficult teachers” and “cold wind”; West, “the direction of endings”; and South, where “release,” “fire” and “creativity,” are found.

“East” begins in the womb of her beautiful, mixed-blood Cherokee mother, in which Harjo enters the world “choking and kicking, fighting for air.”  The early years were filled with hard work and near-poverty, as well as love and disappointment for her alcoholic and mostly-absent Muscogee/Creek father.  Harjo writes of the day he left: “My father disappeared.  And so did I in this world without father.  Emptiness took the place of everything I had known to be true.”

“North” tells of Harjo’s escape from her white, abusive stepfather and his “house of bad spirits and pain,” to the Institute of American Indian Art in New Mexico.  There, she finds an outlet for her talents in theater, music, and painting – talents she had been forced to suppress in her stepfather’s home.

Readers encounter many heartbreaking characters at the boarding school.  One such character is a boy from a South Dakota reservation who runs by Harjo one afternoon.  She writes:

He leapt onto the hoods of every car in the administration parking lot, crushing in the roofs, one by one.  He kicked in a set of windows lining the academic building. Around him a whirling halo glowed a brownish red.  Within the whirlwind were racial slurs, his abandoned baby self, the running-away ghost of a father.  Two teachers grabbed him and threw him to the ground.

“West” begins with Harjo meeting and falling in love with a Cherokee Indian in the boarding school postgraduate program.  Soon afterwards, she returns to her mother and stepfather’s house, still a teenager and secretly pregnant. Harjo’s new life in Oklahoma is no easier than her young life there, and she struggles as a new mother with a distant, alcoholic husband who can’t keep a job, and a mean-spirited mother-in-law.  She writes that her days were “consumed with the drudgery of survival.”  Her life was once again devoid of art.

I was struck by Harjo’s casual mention of visiting the Indian clinic in Oklahoma shortly before the birth of her first child and being asked if she wanted to be sterilized. She chose not to sign paperwork authorizing her sterilization, and writes that she didn’t think much about it at the time.  Harjo later realized that many Indian women were sterilized – some without even the formality of signing consent papers – and others, not fluent in English, signing without understanding what they were authorizing.

The first time I read this passage in the memoir, I sat the book down and paused. Sterilization? Before I could move forward in the memoir, I researched this horrific period in our country’s history, barely one generation earlier than mine, in which the Indian health services improperly sterilized thousands of native women. During the 1960s and 1970s, the Indian Health Services sterilized an estimated 25 percent of American Indian women who were between the ages of fifteen and forty-four.  The allegations include the failure to provide women with necessary information regarding sterilization; use of coercion to get signatures on the consent forms; improper consent forms; and a lack of an appropriate waiting period between the signing of a consent form and the surgical procedure.

I remained stunned that I hadn’t heard of this before Harjo’s memoir, that this wasn’t covered in Oklahoma history classes or in United States history classes.

I’ve always believed in fiction as education, in fiction as a means of social change.  Inspired to bring more awareness of this horrific practice, I wrote a short story about a Native woman who, as a teenager, is forcibly sterilized following the stillbirth of her child.  Before this mutilation of her body, she was a gifted painter.  Afterwards, she loses her desire and ability to create art, and slowly goes mad.  I am forever grateful for Harjo for teaching me about this shameful government practice committed against Native women.

In “South,” Harjo and her husband return to Santa Fe, to rekindle their dreams of being artists.  She begins to paint again and eventually finds freedom from her cheating husband, only to replace him with a physically abusive Pueblo poet, with whom she wakes next to with a hangover nearly every morning.  Harjo eventually leaves her abuser, but beneath the functioning student and mother roles she plays, panic attacks and inner demons consume her.

Harjo writes, “I believe that if you do not answer the noise and urgency of your gifts, they will turn on you.”  She begins writing poems, and uses them to survive the panic, alcohol, monsters, and dreams that threaten her existence.  “It was the spirit of poetry,” she writes, “who reached out and found me as I stood there at the doorway between panic and love.

Be sure to read StS’s interview with Joy Harjo! 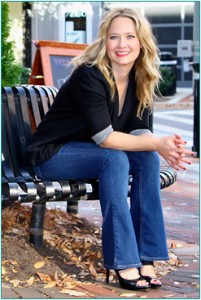 Shelby is a yoga teacher, former lawyer and unabashed country music fan. She lives with her husband and three children in the Washington, D.C. suburbs, where she has learned to embrace the minivan. She is a candidate for an MA in Writing from Johns Hopkins University and is working on her first novel, Persimmon.  Shelby is a citizen of the Caddo Nation of Oklahoma, and American Indian themes feature prominently in her writing. Shelby’s latest endeavors include training for a half marathon and triathlon, learning French and home brewing hoppy pale ales.

Her work can be found in Bethesda Magazine (July/August 2013), Outside In Literary and Travel Magazine (March 2013), Defying Gravity: Fiction by Washington Area Women (fall 2013), Gargoyle Magazine #61 (forthcoming spring 2014) and on her blog.