Some Thoughts on Cuomo’s State of the State Address 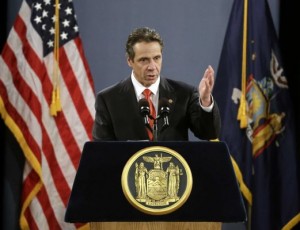 In Andrew Cuomo‘s recent State of the State speech, the New York Governor broke with his past routine and what has been the routine for much of the national rhetoric for the last half a decade. Instead of focusing almost solely on the state of the U.S. economy and the health of our financial institutions, Cuomo spoke largely to what many consider “social issues.” He proposed serious measures on a variety of topics–gun control, marijuana legalization, carbon caps, campaign finance reform. And perhaps most interestingly was a forceful and focused tirade against women’s discrimination, proposing a 10-point plan to fight against it (at least structurally). The plan is wide-reaching, addressing everything from human trafficking to pay equity.

Last year, the Governor mentioned a reproductive rights bill in passing during his State of the State. This year, however, “Governor Andrew Cuomo appears to be an unapologetic feminist,” says National Organization for Women-NYC President Sonia Ossorio. “The Governor has set forth a bold plan that puts women’s equality front and center.”  It is a marked change in tone.

It seems that while the vast majority of televised political discourse (remember the Presidential debates?) seems to revolve around how best to use fracking to create jobs, part of what helped Obama and Democrats in general take the lead on election day was the background commentary on rape from Republican Senate candidates. Politicians who spoke as though women were not an active, organized, equal voting block lost their races, and Cuomo seems to have picked up on the fact that somewhere in the Zeitgeist of today’s political climate, this sub-narrative of the 2012 election cycle holds a lot of political power.

And that is a very nice thing to see indeed.

Contribute your links and quotes from politicians standing up for women’s rights and equality in the comment box below.