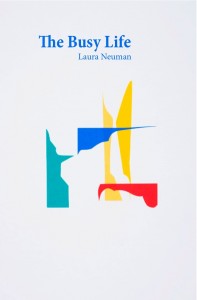 So to Speak is so excited for our sister press Grazing Grain‘s first chapbook unveiling! Congratulations to Laura Neuman’s winning this wonderful inaugural inclusive feminist book contest! Neuman will read from The Busy Life at the Gazing Grain reading event during Fall for the Book Festival at 5:30 p.m. on Sunday September 30, 2012 in the Mason Hall Atrium. The winning book will be on sale at the reading for $8. Books will also be available for purchase on their website.

We are absolutely thrilled with the quality of submissions we received in our inaugural year.  We had the chance to read many outstanding manuscripts from a diverse group of feminist poets. In starting this press, this is what we envisioned: a variety of feminist aesthetics from a range of feminist identities. We are honored to publish Laura Neuman’s book and pleased that she/xe will be our first Gazing Grain author.

The Busy Life turns the prose poem into a paper theater of a million intimacies, each sentence a stage on which perform the I and the other I called you. Though their dramas partake in the venerable feminist tradition of asking questions about the ethical, philosophical and sexual relationships between you and I, these poems know “There is no longer any possibility that we will ever locate ourselves absolutely. Not on bodies, on paper, or on streets.” While this might strike some as a potentially hopeless position to hold regarding gender, sex, language and self, The Busy Life is about the many possibilities that arise in the absence of The Absolute. “You gave up five other subject positions in order to read the body that used to be your only shot,” it proclaims, “We were lucky to have such demanding material for selves.” Regarding the demands this chapbook makes on its readers, we should count ourselves similarly lucky: its grave intelligence gives shape to an inexhaustible playfulness. This work knows that though language provides one of the primary means of communication between two subjects, both speaking and writing transmit knowledge in a way that introduces epistemological static into even the best of connections. So what’s a poem to do? With a predilection for sexy syntax subverting its unflagging allegiance to the logic of the sentence, The Busy Life takes pleasure in the unpredictable, difficult terrain of intersubjectivity. Its theorizing driven by lived experience, it takes pains to record with great faith the friction that gives relationship such hot frisson and terrible blisters. Their wit and intellectual ambition symptomatic of the vulnerabilities they reveal, paradox is the native language of these poems. Their deep ambivalence about holding any one subject position is totally committed to making pages that can hold all of yours.

Laura Neuman was born in San Francisco and currently lives somewhere between Seattle and Philadelphia.  She/xe holds an M.F.A. in Writing from Bard College Milton Avery School of the Arts & an M.A. in Poetry from Temple University.  Hir poems have appeared in The Brooklyn Rail, Tinge, Omniverse, and other publications. In Philadelphia, she performed and co-conspired with The Workshop for Potential Movement.