Shopping for Groceries and Identity in America 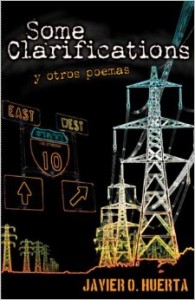 This past April when I conceived of an international poetry showcase to celebrate George Mason’s diverse undergraduate student body, Chicano poet Javier O. Huerta’s “El Coyote” from 2007’s Some Clarifications y otros poemas was one of the first to go on my list. The prose poem gives voice to a child’s bewildered awareness of not only domestic violence as perpetrated by his father, but also of the father’s occupation, that of a human smuggler, or coyote. Check it out:

“Tu jefe es coyote,” my cousins said.  I was only six, so I pictured Father on all fours with tongue out, panting, on the prowl.  “No seas tonto,” my cousins teased and laughter spread.  I tried to smile.  They never heard his paws scrape, scrape our window screen. Never saw him tear up our couch or knock over the kitchen table. They never heard my father growl.  They did not have to take a trip to visit the razor wire.  They were not speechless when keepers opened Father’s cage.  They did not spend sleepless nights dreading they, too, would grow gray fur and fangs.  They did not understand.  No, they never fought the urge to howl.”

To close So to Speak’s “Hispanic Heritage Month”-themed series, we invited Huerta, a doctoral candidate in English at the University of California, Berkeley, to share with us what feminism looks like to a brown male poet in 2013.

PB: What does it mean to you to be a twenty-first century feminist? How does being a male or POC inform and complicate your feminism? Does being a poet?

JH: My little cousin Jacqui is starting middle school in Laredo, Texas. She’s small for her age but does really well in school and in extracurricular activities. Her mother (mi prima Viri) makes a living by cleaning houses; her grandmother (mi tía Morena) makes a living by cleaning houses; and her great-grandmother (mi abuelita Tila, QEPD) made a living by cleaning houses.  I think of Jacqui as I’m working on 150 verses in memory of the actor Lupe Ontiveros, who played the role of maid more than 150 times. At the center of the poem is the problem of a double translation: “aspirar” as “to aspire” or as “to vacuum.” This is not really a choice for many poor women of color who for generations have had to turn to domestic work to support their families. Ontiveros claims she portrayed every maid she ever played with dignity and respect, so the 150 verses are my way of thanking her. The diversity of roles available to Latina actresses is definitely an important issue but one that should be tied with the more crucial issue of real life roles available to young Latinas. To be a 21st century feminist man means to support efforts that offer women more freedom of choice in their careers and in their lives and to oppose efforts that attempt to limit that freedom. My little cousin Jacqui, and the many other young women of color working their way through our public schools, should be able to aspire to more than vacuuming other people’s houses.

PB: Your latest work, American Copia takes us into the grocery aisles of identity and language politics. What do you make of the pervasive use of “Latino” nowadays among the hyphenated millions officially categorized as “Hispanics” in the U.S.? Is it simply a matter of survival at a time when people apologize for calling someone “a Mexican?” Why should feminists of all persuasions be reminded of the power of labels, self-imposed or not?

JH: The demographic shift in which Latinos are projected to one year become the majority is mostly discussed in terms of the Latino vote and electoral influence. For example, the increase in Latino voters could transform Texas from a red state to a swing state. But another intriguing conversation understands the increase of the Latino population in terms of the Latino consumer and economic influence. This means not only that certain businesses will more aggressively target the Latino consumer, but also that local businesses and politicians, hopefully, will take an interest in increasing the purchasing power of those Latinos. The “Latino” consumer is the one that walks the grocery aisles of my copia. But I quickly narrow him/her down to an immigrant shopper, a Mexican, Mexican-American, Salvadoran shopper, a Houston shopper, an Oakland shopper, a local going to buy groceries at the local grocery store. I think we should be cautious about the use of “Latino” because it is being used to target us, as voters, as shoppers, and as readers.

The label works in Spanish; therefore, it should also work in English. We have been saying “nosotros los Latinos”[“we Latinos”] for decades now. So why does it work so effortlessly in Spanish, yet in English it doesn’t have the same music. I guess I’m waiting for a manifesto arguing for the power of “Latino.” Instead of passionate manifestoes for “Latino,” what we get are introductions to anthologies full of circular reasoning: they begin with the premise that Latino is a term for diverse peoples, and they conclude that Latino Lit cannot be described as one single category because it contains many styles and traditions. There’s no argument to argue against there. Whatever happened to intellectual warfare is heaven. I want “Latino” to stand for something. To be as exciting as “Chicano” and “Nuyorican” once were.

Anyway, I identify as a Chicano poet from Nuevo, Laredo Tamaulipas who lived as an undocumented immigrant in Houston, Tejas from 1981 to 1987.  The more specific the better is what we teach our students.

PB: As a dual-language poet, what’s your take on the continued use of the “/” and the “@” to “correct” or denote the inclusivity of the gendered plurals of Spanish in general and especially when applied to terms like “Chican@ Lit” or “Latina/o Identity”?

JH: I attempted to create my own sitcom about a couple of years ago, even got as far as writing a pilot and getting some friends/colleagues to help me out with shooting the script. What is left of that failed attempt is some unedited footage, and among that unedited footage is a dinner date scene between the main character Nina, city planner by day and aspiring comedian by night, and a man she went on a date with so she could borrow his jokes. As they start to munch on some Caesar Salad, Nina wonders what would go in a Cesar Chavez salad. They go back and forth wondering if the salad should include grapes or not, or if the grapes should be included only so you have a chance to boycott them, or if you should abstain from eating the salad at all to honor the hunger strike. Then this moment:

NINA: But hey, why’s boycott gotta be gendered? Why can’t it be girlcott?

NINA: Yes, dang it. It’s the 21st century. A woman should be able to order her womenudo from a womenu.

As writers, we believe that language matters and can affect change, so the correction of gendered language intends to correct the institutions that privilege men.  I suppose the danger in correcting the gendered language by changing “o” to “a/o” or “@” or by spelling “women” with a “y” or by spelling “mujer” with an “x” is that this correction can easily be reduced to wordplay and lose some of the critical force it originally intended. 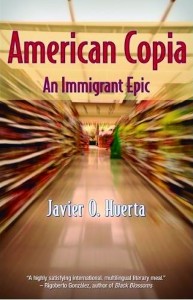 PB: When approaching new work do you consider a particular audience? I was a few pages into American Copia before I realized that my appreciation of the work would be severely limited if I spoke only English, or only Spanish.  Are you aiming for a specific—bilingual– audience?

JH: In my MFA, I wrote a failed novella, novela corta in Spanish, titled “Linda.”The narrative followed the eponymous character as she journeys to Mexico to bury her recently deceased husband. It is narrated in English by a 3rd person limited narrator, limited to Linda’s perspective, but the dialogue is in Spanish because that is what the characters are speaking. I think that at that time I was frustrated with the use of Spanish in the works of U.S. Latino writers, the way Spanish phrases were immediately translated and were used to set up conversations that were supposed to be in Spanish. Honestly it made me feel like those books were not meant for me, or more importantly that they were not meant for people I knew back home. They explained too much. So that’s why I attempted this bilingual novella. I was fortunate to attend UTEP for the MFA because my instructors and classmates allowed me to experiment with bilingual form.

As for my Copia, the verse is in Spanish, and the prose is in English for the most part. It also includes a nonfictional play based on a friend’s experience as a grocery clerk in a Los Angeles Mexican grocery store. The dialogue in the play is in Spanish, English, or Spanglish depending on the character. The play ends with a not so short speech in Spanish by an older female employee giving advice to the main character. The advice is about men and violence and the need to keep moving on in spite of them. Honestly I didn’t even think about the language at that point, mostly because I don’t understand how that speech could have been written in any other language but Spanish. One failed part of Copia was my attempt to include as many languages as possible, languages that are actually spoken in communities all over the United States. I actually contacted friends and asked them if they would help me out with this part and many agreed. But time and the editorial and publication process did not allow it. This multilingualism is an aspect of American Copia that I would like to pursue if I ever get the chance to release a second edition.

If you haven’t yet, take a look at our other two profiles of Latino/Hispanic Americans, Elizabeth Huergo and Frances E. Valdez. 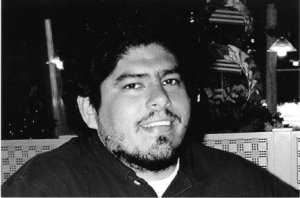 Javier O. Huerta is the author of American Copia and Some Clarifications y otros poemas, a recipient of the Chicano/Latino Literary Prize. His poems have been included in numerous anthologies, including American Tensions: Literature of Identity and the Search for Social Justice and The Best American Nonrequired Reading 2011.