Secrets in the Dark

The woman has been roughed up. There’s a bruise on her cheek, and her blouse is ripped. Her long brown hair has been hacked off with a pair of scissors, by her own hands, and several of her teeth have just been brutally yanked out by a tooth-seller. A crowd of filthy men and women taunt her, shoving her along a darkened street. Her voice breaks into a raw, bitter wail. “There was a time when men were kind, when their voices were soft and their words inviting.” 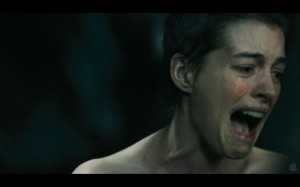 If you’ve ever seen Les Misérables, you probably recognize this gut-wrenching scene. Fantine, a factory worker who has just lost her job, has sold her hair and teeth to pay for her young daughter’s room and board.

Anne Hathaway plays the role in the latest film version of Victor Hugo’s story of love and hate in the French Revolution. She’s painfully beautiful in this scene, bruises dark on her pale skin, eyes sunken and hopeless as she’s pressured into prostitution to support her daughter.

A French army officer has just finished doing his business on top of her. She’s belting out this song, and I can hear people all around me sniffling in the dark of the movie theater:

“I had a dream my life would be

So different from this hell I’m living.

So different now from what it seemed

Now life has killed the dream I dreamed.”

Even the guy behind me with the annoying belching issue seems to be crying. He starts breathing badly, and I wonder if he’s having a heart attack or something. I’m considering turning around to ask if he’s OK, but I don’t want to embarrass him if he’s crying.

His labored breathing suddenly evens out, and I hear the sound of a zipper being closed. Apparently he successfully put himself in the French officer’s place and had his own way with Anne Hathaway in the dark.

“Why didn’t you move?” My therapist’s face had that inscrutable look she gets, and her question seemed as impenetrable as her expression.

“Move?” I echoed. “Why didn’t I move?” An irrational shame nudged a blush up my neck as I tried to remember: Did I even think of moving?

Doctor Z nodded and leaned forward in her chair, elbows perched on her knees and fingers pressed together in a teepee under her chin as if trying to keep her mouth from dropping open.

“Well, I thought about it for a minute, but — I know it sounds stupid — at first I couldn’t believe it was happening. Like, I must be wrong. Then I thought that he was obviously a mess, sick, and I didn’t want to hurt his feelings.” I paused, and my therapist raised her eyebrows. “Wow,” I said.

“But I felt trapped. Moving didn’t really seem like an option.”

“Why don’t you journal about this? Writing always helps you. I’ve heard you use those words before, feeling trapped, not trusting your own experience, not being able to take care of yourself because you were worried how it might make someone else feel.”

Doctor Z pulled some papers out of her black bag, the signal that our time was up. I wrote her a check and drove home with only half my mind on the road. “Why didn’t I move?” I kept hearing the question.

Tough therapy session. Why didn’t I move away from that guy in the theater? Why did I feel so powerless? The other thing I can’t figure out is why I was afraid to tell anyone, even my friends. Like I had done something wrong, or the whole thing was so disgusting and ugly that I had to hold it in, protect the world from it. Not pollute other people’s lives with my pain. Just like when I was a kid. Don’t tell anyone what’s going on in the house; don’t tell the neighbors about Daddy passing out. Put the vodka bottles at the bottom of the trash bag. It’s all a secret I have to keep.

My mom. The queen of denial. She’s the one who taught me how to keep a secret. When she caught me on the couch with my ninth-grade boyfriend’s hand down my pants, she said, “I know I didn’t see what I just saw,” and she never said another word about it. Mom didn’t even want to tell the doctor that Daddy was an alcoholic when he was lying on life support in the hospital! As if they couldn’t tell. I broke the secrecy code and told the nurse our shameful secret. Daddy died anyway.

Now that I think of it, the voice in my head at the movie theater saying, “That couldn’t have happened. I must be wrong,” was my mom’s voice.

“Good work,” said Doctor Z, when I finished reading my journal entry. “What else?”

“Well, I guess my family was so focused on our shame and secrecy that what I needed didn’t matter much. It’s like I learned that I’m not worth taking care of — I don’t believe I have any rights. Mom never took care of her own needs either — trying not to upset my father always came first. That’s why I was more worried about how that guy might feel if I moved than I was about my own feelings.”

I picked up the cushion on the sofa and began messing with the stitching. “Have I ever told you about when I lost my virginity?” I asked, though I knew I hadn’t. It all came out in a rush. “I was sixteen and I was at a party in an upstairs room with an older guy, kind of a friend. We were messing around and he got really aggressive. I said no to him, told him to stop. I said I didn’t want to, but he went ahead and I thought, ‘Oh well.’ I wanted him to like me, and I guess I figured it wouldn’t be worth the fight. I’ve always felt ashamed of that.”

There was a silence while we sat with my shame and I continued to unravel her cushion.

“You were sixteen, Melanie. Just sixteen.”

“Yes.” More silence. I couldn’t look at her.

“You’re an adult now. You can take care of yourself. You don’t have to be a victim . . . you have choices.”

“Yes, I have choices.” I did not sound like an adult. I sounded like a little girl parroting her mother’s directions. I waited for further instruction.

“Don’t forget to breathe,” Doctor Z reminded me, as she often must.

I exhaled a laugh, set the cushion down, and looked her in the face. “Yes, I do have choices.”

I am going back to the theater tonight. It’s been nearly two months since Les Mis, and I was telling Dr. Z how mad I was at that asshole cause I felt like he had stolen my theater from me. I usually go every week, but the thought’s been making me nauseated.  “I can’t imagine sitting in that seat again,” I told her.

“Well,” she said, “you could sit in a different seat.”

“Oh yeah,” I said, laughing at this obvious solution. “I have choices.”

So I’ve been planning on choosing a new seat. But that’s still making me mad. He stole my spot and I feel l like a victim. So I think I’ll march right down that aisle and sit in my regular seat, twelve rows back on the left. If somebody sits behind me, I can always move.

Melanie Lynn Griffin leads writing workshops and spiritual retreats. Her writing has appeared in Sierra magazine, AARP Bulletin,WildEarth Journal, Outside In Travel Magazine, and a 2014 anthology entitled Answers I’ll Accept. She holds a Masters in Creative Nonfiction from Johns Hopkins University and a Certificate in Spiritual Direction from National Cathedral College. A complete list of publications and her blog Writing with Spirit can be found at http://melanielynngriffin.wordpress.com/

6 thoughts on “Secrets in the Dark”