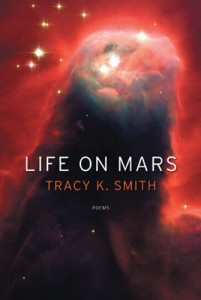 Shamefully, I have only just now discovered Tracy K. Smith’s Life on Mars (Graywolf), winner of the 2012 Pulitzer Prize for Poetry. I had the pleasure of seeing Smith read with the Dark Room Collective in D.C. last spring, and now can add, too, the immense pleasure of encountering her word on the page.

Life on Mars is Smith’s third collection, following Duende and The Body’s Question (both from Graywolf). My experience reading the book was such that it’s hard to know where to start—with the elegant unraveling of sentences, the daring scope that encompasses the intimate and universal, the precision of description. Perhaps it is this incredible breadth that impresses me the most in this text: Smith guides us from upstairs hallway to stars with the same authoritative gaze, which at once wonders at and accepts all of the component parts. To call Smith meditative is true, of course, and this book is at its basis a powerful elegy for her father; her voice also has a note of prophetic vision. Through Smith’s descriptions, we have access to new images of our planet “ticking with mines,” can experience “The Universe as Primal Scream” through an infant screaming through an apartment wall as though reaching for the moment when “the whole building will lift off, and we’ll ride into glory like Elijah.” And Smith doesn’t expect us to simply take her word for it—the book is full of entreaties to join her in her observations and grappling. Look, she reminds us, listen.

When we do, we are thrilled by her disruptions of our expectations. For Smith, it seems that perhaps a barrier between the intimate and the universal doesn’t exist—there is a complex pain induced by both seeing a lover’s dead wife in a picture frame and the beauty of space, a particular kind of human longing that can be measured by a desire for eggs in the morning. In “Song,” she writes of a lover’s hands:

And discover my body is near. Before touch.

Pushing off the ledge of the easy quiet dancing between us.

In the sequences, Smith tackles her father’s death more directly, softly meshing together memory with imagination. Her father worked on the Hubble Space Telescope, and I can’t help but think of the book building further on that project: the telescope allowed us to see the universe as never before, and now come Smith’s words to show us even more of it. Smith, as a guide, draws on the scientific and religious with familiarity, but allows revelation to come as easily from lyric reflections and visits from David Bowie or Charlton Heston. In “My God, It’s Full of Stars,” Heston asks, “Will you fight to stay alive here, riding the earth/ Toward God-knows-where?” Smith’s book offers a range of possibilities in response, a variety of types of existence, all with confidence that there is divine presence and also extraterrestrial life, perhaps passing by our noses at this moment. Smith asks us to engage in the kind of preparation it seems she has always been making in “The Universe Is a House Party:”

At the pinprick mouths, the nubbin limbs. We’ll rise,

Seeing us, they’ll know exactly what we mean.”

Smith writes with this kind of graceful acceptance of the universe, as is and as it could be. She turns to news reports on hate crimes as the basis for into “They May Love All That He Has Chosen and Hate All That He Has Rejected.” The poem movingly incorporates the speaker’s emotional reponse and the voices of the silenced—and through letters from the dead at popular vacation spots. One of the dead, a Wesleyan student, writes:

“I used to think my body was a container for love. There is so much more now without my body. A kind of ecstasy. Tonight, I’m at the bottom of the Grand Canyon. I don’t know where to end.”

This kind of twist is Smith at her most beautiful and harrowing, simultaneously—she is not afraid to allow the moments of greatest reflection or meditation occur in a space capsule halfway up the St. Louis Arch or in the presence of Bowie. In Smith’s poems, pain and forgiveness sit together, questions of authority and blame are acknowledged, but the foreground remains the emotional remnants of death and survival.

The poems themselves urge reflection whether in the moments between sections of a sequence or lyric vignettes. Smith incorporates a variety of forms while maintaining focus on the ideas and emotional resonance, transferring from lines broadened by white space in meditative moments to swifter tercets or long-lined couplets; meanwhile Smith’s universe is constantly reshaped by birth and death, by shifts in matter and transfer of materials, forceful but hidden enough that most do not draw our attention. In these poems, these shifts are not to be feared or resisted, but considered and watched for. In “My God, It’s Full of Stars, she writes:

The first few pictures came back blurred, and I felt ashamed

For all the cheerful engineers, my father and his tribe. The second time,

The optics jibed. We saw to the edge of all there is—

so brutal and alive it seemed to comprehend us back.

I am certain that this is a book I will continue to return to for its incredible beauty and intelligence. I cannot help but imagine that Smith will continue to bite off more than most of us dare, and to carefully reveal just how much we’ve been missing.