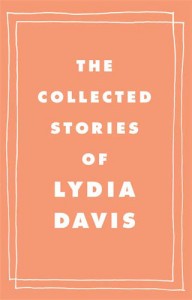 The Collected Stories of Lydia Davis, published just last year, contains all of author Lydia Davis’ stories from her collections Break It Down (1986), Almost No Memory (1997), Samuel Johnson Is Indignant (2001), and Varieties of Disturbance (2007).

As with Mary Robison, whose book Why Did I Ever I reviewed last month, Lydia Davis is a fascinating fiction writer for poets to read. Of course, just calling her a fiction writer is a slippery business, since Davis’ work has in fact appeared in anthologies of poetry; she is better characterized as a multi-genre, cross-genre, experimental-genre, and just all around fascinating writer.

Her absurd, playful, and succinct stories have a way of ending in deflated anticlimaxes, reflecting a dark, postmodern style of writing that is as humorous as it is terrifyingly lonely. Here is a collection of such last lines from various Davis stories:

“They have never known such disappointment as I have.” (The Housemaid)

“…she is not so much watching as waiting, and often, now, feels she is waiting.” (The Cottages)

“…finally I put them away in a drawer to give her when they came out again, because by then it wasn’t going to be long, and it made me tired all over again just to think of it.” (The Sock)

“There are so many places we could go.” (Traveling with Mother)

“I should add them up, now and then: what are my happy memories so far?” (Happy Memories)

These deliciously abrupt endings gives readers the jolting sense that they are stopping too suddenly, and right in the middle of the story—a sensation Davis creates not just through her content and narrative arcs, but also through her form: so short that many stories are merely 1-3 sentences long. The abrupt endings evoke a note of the absurd, but also of a deep, troubling loneliness and senselessness in the worlds of Davis’ characters.

This theme of emptiness is conveyed in tiny stories such as “They Take Turns Using a Word They Like,” which reads simply:

“It is extraordinary,” says the other.

Or in “Special,” which reads:

“We know we are very special. Yet we keep trying to find out in what way: not this way, not that way, then what way?”

“I am a sober person, a mother, and I like to go to bed early—but how can I lead a regular life in this building? It is a circus of vaginas leaping and prancing: thirteen vaginas and only one penis, my little son.”

Throughout Davis’ canon is also a re-occurring theme of borders and boundaries, in relationships and between the self and the self’s body. In “What She Knew,” a woman lives with the secret that she is “not really a woman but a man, often a fat man, but more often, probably an old man.” In “The Fish,” another woman identifies so completely with the loneliness of the fish she has cooked for dinner that by the end of the one-paragraph story, the point of view had, like a camera pan, totally switched from the woman’s to the fish’s.

A story called “Almost Over: Separate Bedrooms” consists of just three sentences about a couple sleeping in separate bedrooms, and what they each dream about, while another, “Problem,” identifies parents and step-parents in a complicated divorce situation merely by letters, as in a math problem.

Lydia Davis is an exciting writer to read for all genres, and her Collected Stories is a beautiful display of Davis’ oeuvre.

1 thought on “Review: The Collected Stories of Lydia Davis”