Remembering Philomela: Origins of the Mute Woman, and Why She Remains Pertinent to Feminists

The mute woman found in myths and folklore embodies issues of marginalization, subjection, and self-determination.  She is an intriguing figure because she invokes both empathy and irritation, embodying both women’s experiences with silence and women’s resentment of that silence.  Folk narratives offer a particularly compelling context for exploring silence as a feminist issue.  Folk narratives exhibit patterns in character roles and gendered themes, and female silence is easily identifiable as one such pattern.  It can be detected as early as 8 AD, when the Roman poet Ovid retold the Greek myth of Philomela in Book VI of the Metamorphoses, a fifteen-volume narrative poem. 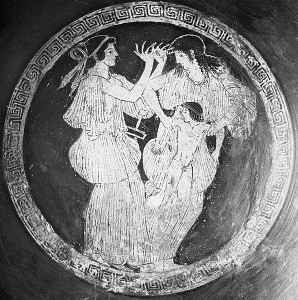 In lines 401-674 of Book VI, Ovid explains how Philomela is raped by her sister’s husband, king Tereus of Thrace.  When Philomela threatens to tell the world of his rape, Tereus violently cuts off her tongue, rapes her again, and locks her in a cabin in the woods.  Thinking her absolutely silenced, he tells his wife, Procne, that her sister is dead.  Philomela, undeterred, passes a year in the cabin weaving “purple signs” onto a tapestry that “tells the story of her wrongs” (Ovid 329).  She gives this tapestry to her attendant, who delivers it to Procne.  The enraged queen releases her sister and brings her back to her palace, where she seeks revenge on her husband by killing their son and serving the body to him as a meal.  While eating, Tereus asks to see his son, and the sisters delight in their triumph; Procne informs him that his son is in his stomach, and Philomela bursts onto the scene with his son’s head.  As Tereus attempts to kill the sisters, all three are transformed into birds.  According to Ovid, Tereus becomes a hoopoe, Procne a swallow, and Philomela, most significantly, a nightingale (329-335).  The nightingale’s song is particularly plaintive and mournful, and this transformation gives Philomela a voice to mourn her real voice and the violation that its loss represents.

Philomela is unmistakably a forerunner for the mute protagonists of folk and fairy tales that we see from the Brothers Grimm and Hans Christian Andersen.  Philomela’s voice, like that of the sister in the “The Six Swans” and the mermaid in “The Little Mermaid,” is something valuable that has been taken from her.  The very power of her voice threatens Tereus, when she tells him, “I myself will cast shame aside and proclaim what you have done.  If I should have the chance, I would go where people throng and tell it” (Ovid 327).  This threat is what prompts Tereus to remove her tongue, her organ of speech, so that her “speechless lips can give no token of her wrongs” (329).  The removal is violent, forceful, and clearly unwanted. “But he seized her tongue with pincers, as it protested against the outrage, calling ever on the name of her father and struggling to speak, and cut it off with his merciless blade” (327).  The tongue itself, the physical manifestation of Philomela’s voice, becomes the subject of the narrative as it clings in vain to speech, “calling” and “struggling to speak.”  The very fact that it “protested” indicates Philomela’s dissent and proves that her muteness is forced upon her completely against her will.

This tale not only describes a woman’s enforced silence, but also presents her perseverance in spite of losing her physical voice, as we will see in European folk and fairy tales of mute women.  In fact, the myth of Philomela presents the prototype for stories of women who devise other ways of speaking when they cannot speak physically.  Without a physical voice, Philomela resorts to storytelling through weaving; she writes her story because she cannot speak it. Elissa Marder argues that “[t]his text invites a feminist reading […] because it establishes a relationship between the experience of the violation and access to language” (160).  According to Marder, Philomela “writes out of necessity and in response to violation”; that is, she discovers a secondary way to manifest her voice in the absence of the conventional means.   Karen E. Rowe similarly points out that “Philomela’s trick reflects the ‘trickiness’ of weaving, its uncanny ability to make meaning out of inarticulate matter, to make silent material speak” (56).  Rowe thus emphasizes the importance of voice as well as silence in Philomela’s story, viewing the myth as a paradigm for understanding the female voice in folklore and fairy tale.  By weaving tales and singing songs, Philomela not only embodies the later archetype of the female storyteller, but also “breaks her enforced silence by speaking in another mode—through a craft presumed to be harmlessly domestic, as fairy tales would also be regarded in later centuries” (57).

Rowe’s concept of “enforced silence” is the key link between the tale of Philomela and later European tales like “The Six Swans” and “The Little Mermaid.”  In those tales, silence is also imposed on the protagonist.  The major difference is that Philomela is brutally robbed of her voice by another character, whereas “The Six Swans” and “The Little Mermaid” concern women who appear to give up their voices voluntarily.  This difference is trivial in light of the shared theme of female silence, which always involves some degree of coercion, raising the overarching questions of voice and autonomy, questions that remain pertinent to feminists today.  We must not forget Philomela.

Rowe, Karen E. “To Spin a Yarn: The Female Voice in Folklore and Fairy Tale.” In Fairy Tales and Society: Illusion, Allusion, and Paradigm.  Ed. Ruth B. Bottigheimer. Philadelphia: University of Pennsylvania Press, 1986.  53-74.

Christina Elaine Collins is a Pushcart Prize-nominated fiction writer, an MFA candidate and English instructor at George Mason University, and So to Speak’s assistant editor. Her fiction can be found in various literary journals such as Jabberwock Review, Poiesis Review, Weave Magazine, and Rose Red Review. She has been a writer-in-residence at the Kimmel Harding Nelson Center for the Arts as well as the Art Commune program in Armenia. You can find her on Twitter at www.twitter.com/CElaineCollins.

1 thought on “Remembering Philomela: Origins of the Mute Woman, and Why She Remains Pertinent to Feminists”