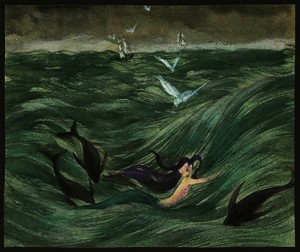 The Little Mermaid’s Predecessor That Most Feminists Don’t Know About.

Hans Christian Andersen’s “The Little Mermaid” is a goldmine for contemporary feminist fairy tale re-writers. Regardless of how they choose to respond to the original tale, they find plenty of material to work with. What they emphasize, what they change, and what they reject all together provide insight into whether the little mermaid, as she initially stands, should be considered a positive female figure. One of the tale’s more sensitive issues among feminist writers is the notion that the woman must cater to the man’s world and adapt to his life. To feminists’ disappointment, Andersen’s mermaid willingly adapts.

Most rewriters of “The Little Mermaid,” however, are not familiar with the little mermaid’s surprisingly progressive ancestor, Agnes, from the medieval folk ballad “Agnes and the Merman” (sometimes known as “Agnete and the Merman”), an early literary example of exogamous marriage. In the first half of both the folk-song and Andersen’s tale, the protagonist immigrates to the man’s world, leaving her own world behind. The second half of Agnes’ story, however, will surprise and interest feminists. It is necessary to disclose what becomes of the human girl, Agnes, after she has immigrated to a merman’s world, for her ending may be the very ending that feminist rewriters unknowingly seek.

After Agnes lives with the merman for many years and bears him seven sons, she soon longs to return home. The merman gives her leave to visit the land as long as she promises to return to her “children small” (Olrik 114). Instead of keeping her promise, she chooses to remain on land and abandon her mer-husband and children. When the merman comes on land to retrieve her, he beckons to her: “Heed now, Agnes, what I say to thee! / All thy little children are longing after thee” (115). Agnes’ answer is harsh and surprising: “Let them long as they will, let their longing be sore, / I shall return to them nevermore” (116). Indeed, she rejects her role as wife and mother. Even when the merman tries to exploit her maternal sympathies by asking her to think of their children, Agnes remains firm in her final answer: “I think not of the grown ones, nor yet of the small, / Of the baby in the cradle I’ll think least of all” (116). She rejects all that is traditionally thought to be a woman’s lot in life: marriage and motherhood. By refusing to return to the sea, she rejects the limitations of this ideal, as well as the notion that a woman must cater to her husband’s lifestyle.

Whether or not one agrees with Agnes’ choice, her self-directed and unapologetic repudiation is remarkable. Her ending presents an alternative to the little mermaid’s outcome—the possibility of liberation from the traditional path through a means other than death. For this reason, Agnes’ liberating ending may indeed be the ending that feminist writers seek but cannot find in their revisions of “The Little Mermaid.”  Feminist revisions, after all, seek to expose, question, and challenge the implausibility of traditional gender constraints and social expectations, and, above all, liberate the original text and its readers from those constraints and expectations. Agnes is the embodiment of that liberation—a kind of radical feminism far ahead of its time—but, unfortunately, her story has been lost. Andersen’s “The Little Mermaid,” as a newer tale of “the double world” theme, was so popular that medieval Agnes was inevitably forgotten. Perhaps feminist rewriters of “The Little Mermaid” are, without realizing it, attempting to reclaim some trace of Agnes. Or if they’re not, then maybe they should be.

Three writers in particular have striven to reconstruct Andersen’s protagonist: Barbara Walker in “The Littlest Mermaid,” Joanna Russ in “Russalka or The Seacoast of Bohemia,” and Emma Donoghue in “The Tale of the Voice.”  They each have something different to offer, but all three respond in some way to the problems of voice and autonomy in the original tale. Interestingly, none of these revisions responds to the original little mermaid’s goal of immortality. All three stories focus only on her secondary goal of winning the prince and attack her pursuit of a romantic ideal. This focus may perhaps be explained by the fact that the romantic ideal and the notion of self-sacrifice for romantic love are dominant in the minds and lives of contemporary women.

Ideally, a feminist version of Andersen’s mermaid would remain able to rely upon herself for success rather than upon another. Perhaps, even feminist revisions cannot break free of certain contradictions; perhaps we still embrace the notion of woman as self-sacrificer. It seems, then, that the most realistic goal is to find a happy medium. Perhaps there is no definitive way to achieve this medium—perhaps Andersen’s mermaid can only be happy in death, and perhaps Agnes’ abandonment of her mer-family is not an ideal model of behavior—but in the end, every little mermaid should maintain the human right to pursue her own ends on her own terms, with her own voice intact to guide her.

Christina Elaine Collins, in addition to serving as So to Speak’s Assistant Editor, is a Pushcart Prize-nominated fiction writer, an MFA candidate and English instructor at George Mason University. Her fiction can be found in various literary journals such as Jabberwock Review, Poiesis Review, Weave Magazine, and Rose Red Review. She has been a writer-in-residence at the Kimmel Harding Nelson Center for the Arts as well as the Art Commune program in Armenia. You can find her on Twitter at www.twitter.com/CElaineCollins.