It’s now been almost 72 hours since Seattle’s own Sherman Alexie closed the annual national celebration of all things writerly known as AWP.  But writers everywhere, and this writer in particular, remain jetlagged and not just because of the 12-hour trips each way for those of us in the east coast.

(Ahem, if you don’t know anything about AWP check out Peter Mountford’s Guide to AWP for People Who Don’t Know What AWP Is. His Useful Stereotypes are especially on-point: example 1. Earnest Poet, example 2. Mid Level Writer You’ve Never Heard Of. )

This was my second year attending AWP and I have to say I was a little less dazed and confused but just as googly-eyed as the first time.

There was running into my undergraduate prof., Allen Gee, at the top of the fourth floor escalator on registration day, then later in a rather intense panel on Writing Fictional Characters of Another Race led by the phenomenal Randa Jarrar and Mat Johnson among others.  (I chased them both after the panel and hope to feature them on StS soon!) 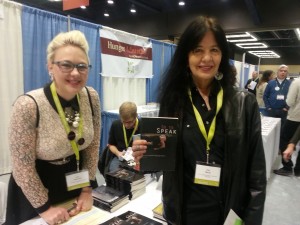 While womanning the StS table at the bookfair along with StS Asst. Poetry Editor, Alicia P, I saw and invited (manhandled-fawned) over the Great Joy Harjo whom we featured back in November, and yes there were pictures and yes this is us bragging.

There was the joy in Joy Castro‘s packed panel on Family Trouble: Memoirists on the Hazards and Rewards of Revealing Family which offered touching and surprisingly humorous tales of the logistical and emotional negotiations endured when writing about everything from incest and sex addition to adoption and parenting and autism. StS will work tirelessly to bring Joy to you in the near future.

Dorothy Allison was greatly missed at Lambda’s 25 for 25, but at least I was able to see Butterfly Boy’s Rigoberto Gonzalez in action. Then, there was the pleasure of a first-time reading with Chang-Rae Lee and the discovery of the lazy charm of Chris Abani. (You had to be there! Were you? Tell us about it in the comments! But rest assured Abani would approve of my qualifier.)

Finding and sitting next to former StS Blog Editor, Sheila McMullin, at The (She) Devil Inside: Unlikeable Women in Fiction, where Samantha Chang and others referred to Edith Wharton and Claire Messud’s work to illustrate how Likeable = Respectable in literature and in life, was a special treat. And an impromptu reunion with StS featured poet Javier Huerta in the convention lobby and later at a ConTinta/CantoMundo offsite reading moved me so, it’ll have to be its own post.

So l’ll  stop here and not bore you with any more of my literary stalking, or with what could very well have been three George Saunders sightings –Asst. Fiction Editor, Julie D. is my witness–except we couldn’t be sure. We were too tired and either non or under-inebriated to approach him, though he was, we swear, no more than 5 feet away all three times.

Will continue AWP-detoxing  for weeks to come. Bear with us.