Pale yellow star-shaped flowers were scenting
the air, the lime fragrance of zest combined
with thyme balm; Zephyr, just orienting
a swarm of bees towards the east, confined
them in its breeze. The tree’s loose canopy
left a dappled shade on the ground below;
the trunk hedged itself with a panoply
of branches growing out of it. The slow,
doddering beams of sunlight were dotting
her legs, wide open, stained with blood spotting.

The sun-God saw the Tillia afresh,
once this tree was a nymph called Philyra.
The cracked red bark on his hand caused a fresh
cut, when he flapped his cloak, the porphyra.
Before Creusa woke, he rushed to vanish;
he morphed himself into a glassy form.
A sudden downpour befell the lavish
vineyard; grapes were reflected into warm
rain drops. A man’s glass statue was found wet.
He refracts white light into violet.

Long ago two girls used to play a game,
they held their hands, ran fast and spun around;
they ended falling down on the soiled ground;
they were divided every time by a
centrifugal force; the very same force draws
the line at scorned steps, too brusquely defends
the victimizing tactics, citing saws,
“Power is given by society”;
“The ones perceived as defiled are exiled.”
Our pallid pretense mirrors the hubris.

In Greek mythology, the nymph Philyra was raped by the Titan Cronus. She gave birth to a son, Chiron, whom she abandoned. Felling deeply ashamed of herself she begged the gods to turn her into a non-anthropomorphic form. The gods granted her wish and she became a linden tree. Cronus was never punished. According to Euripides‘ play “Ion” the princess of Athens, Creusa, was raped by Apollo, the sun god. She gave birth to a son, Ion, whom she abandoned in a cave fearing that her parents would not believe her. She was reunited with her son many years later. Apollo was never punished. 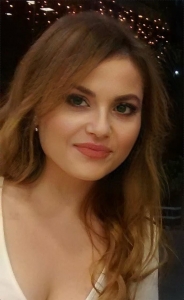 Athena Melliar is a freelance poet, writer and essayist. Her work has appeared in Literary Magazines and journals (Moonchild Magazine, The Light Ekphrastic, The Mystic Blue Review, Frear, Stachtes) and newspapers in Greece, Cyprus, Egypt and England (Pontos News, OffsiteCy, Hellenic Community of Alexandria). She is an UNESCO award winning short story writer. She holds a Bachelor’s Degree in Humanities and is bilingual in English and Greek. Twitter: @AthenaMelliar