No Excuses Remain: Dr. Anita Taylor on What’s Really at Stake with the Redskins’ Name

The following is a guest post by GMU Communication and Women and Gender Studies professor emerita, Dr. Anita Taylor: 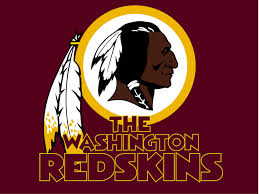 What’s in a Name?  That question served as my introduction to feminist theory.   And it remains vital.

“Names identify; they frame; they illuminate; they obscure.”  Thus opens a section  about naming in a small book I recently published with Dr. M.J. Hardman of the University of Florida, Gainesville,  Making the Invisible Visible.  We wrote the piece as one step to reclaiming the authority and power to name (to label) and to have one’s labels “stick” to become part of the lexicon.  We learned the importance of the latter in the still unfinished effort to replace Miss/Mrs. for women.   So, when the invitation to post to this So To Speak blog, what I wanted to write seemed obvious.  I drafted some thoughts about the impetus for and insights we include in that new book.  Then life intervened.

In the course of 2013, some publications agreed to stop using the full trade name of the Washington D.C. area professional football team.  A small number of sports writers, including some from the Washington Post made, and wrote about, the same decision.   I’m not a sports writer, but I also try never to say that word outside of illustrating why not to use it.  Notably, the Post itself, its headline writers and the majority of its sports reporters continue to refer to the Washington football team as the R***s.  And, the team’s owner asserts, he’ll never change his team’s name: “NEVER—you can use caps.” (qtd in Keim)

Over many years a variety of people have raised objections to the Washington D.C. professional football team’s pejorative name–a term classified as derogatory and “sometimes” offensive by the Oxford English Dictionary.  Now there’s an interesting pairing . . . suggests that for some users it is derogatory and not offensive.

A legal challenge to the U. S. grant of patent protection for use of the derogatory mascot name and logo has been renewed.  An appeal to the NFL has also been lodged, based on the NFL by-laws clause noting that the league should not approve team names detrimental to the welfare of the league.

So far, the NFL responds to the complaint by framing the issue in terms of whether fans (or others) are “offended” by the name.   Choosing this frame is deliberate.  It uses a clever language pattern often employed by powerful people:  the passive exonerative.

Here’s  how it works.  The powerful do something negative; in this case, use demeaning, racist language.  But to describe their acts, they use passive verbs and move the negative out of the subject slot,  placing it on the object.  So . . . the League will consider changing its language if “others” are offended.  Or if “enough” others are offended.

Thus these powerful people continue to use a derogatory term–knowing it does not, could not be applied to them.

Plaster THAT on shirts, coats, sweatpants, cars, caps, mugs.  It’s a caricature?  Sure.  Any less so than the “Indian” currently on Washington stuff? 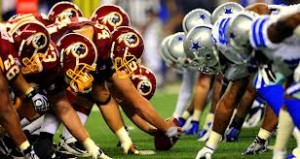 C’mon.  We (most of us) did not quit using the N word to describe Blacks because it “offended” them.  We quit using it because we came to see . . . and be embarrassed by how clearly racist we were to use such language.  Please note the language form here.  How easy it would be to take “we” out of that subject slot:  ‘We came to see how racist it was to use . . .’  So “it” is behaving in racist fashion, not “we.”

Charles Krauthammer (he of impeccable conservative credentials) recently pointed out that we would not use R*** to describe a person we know.  Not in their presence.  Not in the presence of anyone whose opinion we respect.  We would not use that term to talk about a real American Indian unless we intended to demean.  Suppose:  You admire the writing of poet Joy Harjo and you want to introduce her to a friend, would you say, “I think you’d love to read, Crazy Brave, the newest book by redskin writer Joy Harjo”?

Or. . . can you imagine ANY other “skin” color in a logo??  “Oh, I’m sorry you are offended if I call my team the Washington Blackfaces.  I’ll quit doing so if it offends enough of you.”

Yes, indeed, Dan Snyder (and his co-owners) have naming “rights.”   The issue is not owner rights.   Nor is it how many people their use offends.  The issue is the history of racist application that word carries with it.  Try as they do to erase that history, it exists.  We need to be sure the erasure does not succeed.  Owners, the NFL, ticket holders, fans . . . ALL need to see that the word, redskin, is racist.  It was born to distinguish the indigenous “savages” on the North American continent from the white settlers.   The distinctions between “white” and “red” grew more savage as time passed.  “Redskin” was never either neutral or positive; and it grew more pejorative as settlers moved west and Indian resistance grew.

Today, to callously use the term, redskin, is to behave in either a racist and/or clueless manner.

Use of the term is racist or clueless behavior whether done by a rich white team owner or his team’s “loyal” fans.    To insist otherwise is to act like Humpty Dumpty in The Looking Glass, who claimed scornfully, “When I use a word,’ . . . ‘it means just what I choose it to mean — neither more nor less.”

Powerful, rich, racist, clueless . . . choose your label.  But insisting “I don’t mean to disparage anyone by this name” cannot make the racism go away.  It is not that “WE are offended” by such behavior; it is that users are being offensive by continuing to use racist language once they have been called on it.  Now, they have been. 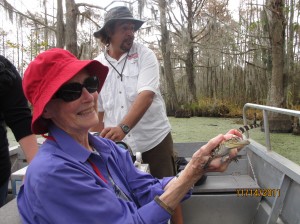 Dr. Anita Taylor is professor emerita of communication and member of the gender and women studies faculty at George Mason University. She has coached debate and taught at the university level for more than 40 years, and has been at Mason since 1979. In 1991 she received the Speech Communication Association’s first Francine Merit award for being the woman who had most contributed to the improvement of the professional lives of women in the profession and the association. In 1996 she was named Communicator of the Year by the Virginia Association of Communication Arts and Sciences; in 2000 was awarded the Distinguished Service Award of the National Communication Association; and in 2002 was selected as the inaugural Feminist Teacher/Mentor by the Organization for the Study of Communication, Language and Gender.

Widely known as a speaker and workshop leader in communication, Dr. Taylor has focused her study on gender and language in communication, women as communicators and speaking in public.  Her most recent scholarship is a web publication, with linguist M. J. Hardman, of Gender and Language: Making the Invisible Visible.  These web pages include teaching and learning materials showing the interactive impacts of language and gender in communication.  Her earlier publications include many articles and speeches, two editions of Speaking in Public, and several editions of a popular communication textbook,Communicating. For 20 years she was primary editor of a self-supporting research periodical, Women and Language and also edited the books, Gender and Conflict, Hearing Many Voices and Women as Communicators: Studies of Women’s Talk.

Lewis Carroll.  Through the Looking Glass and What Alice Found There.  1872

1 thought on “No Excuses Remain: Dr. Anita Taylor on What’s Really at Stake with the Redskins’ Name”