My Scars by Sarita Hacohen

I was two or three years old, and nice Mr. Rubinstein, our elderly neighbor from the next building, was my babysitter.  I remember lying across his knees while his hand patted my baby tushie in soft strokes. The next thing I remember is all the lights blazing and my mother screaming and screaming.

I was eight years old, walking home from school with my younger brother. We took our regular shortcut through an alley. A teenaged boy passed us, and without breaking stride, shoved two of his fingers between my legs.

I was a junior in high school and the principal, Rabbi Levi, caught me in the hall on the way to my next class. He inched up close to my face and asked in a kindly voice, “Have you been making trouble in Rabbi Mosensohn’s class?  Do you promise me to stop?” I nodded my head and he reached down and snapped my bra.

I had just graduated from college and was working at the Sloan School of Management Library at MIT. Alan Gold asked me out. His brother was a classmate of mine at college, and his sister was my camper at summer camp. He was a graduate of MIT and a student at the Sloan School. We went to dinner and a movie, and then back to his apartment. Sitting on the sofa, he began to kiss me aggressively, pulling my clothes off, in spite of my verbal and physical attempts to stop him. When he was done, I put my clothes back on and walked home.

My husband and I were driving back from Tel-Aviv when we stopped at a roadside café. Ami went in to get us drinks, and I decided to check out the quaint little spice store next to the café. As I walked in, I said hello to the smiling diminutive Yemenite man sitting behind his fragrant bags of spices. He got up and advanced toward me, his hand on his crotch.  I ran out to the café and to my husband.

I was sitting on a bus from Jerusalem on the way home. The bus was practically empty toward the end of our long journey. At a bus stop near an army outpost, a soldier entered the bus, and curiously sat down next to me rather than finding his own empty seat among the many available. I soon understood. He very calmly unzipped his pants and pulled out his erect penis, stroking it vigorously.

These are my stories. I have never told anyone—not even my husband—most of them. Every woman has stories. They are not about being beautiful or sexy. They are about men acting in unspeakable ways because they can. I have not even mentioned the groping on crowded busses or subways; the men who would address my male colleague assuming he was the boss; the dealings with doctors, bank clerks, government officials, who would look at and speak to my husband, ignoring my presence; the meetings where men would interrupt me or when an idea that I had expressed was ignored until a man presented it as his own.

These are scars that never go away. I can still feel Mr. Rubinstein’s hand, my bra snapping on my back, the fingers of the boy in the alley.  We all have these invisible marks, they are part of us. My daughters have their stories as well. It’s time to think about our granddaughters. 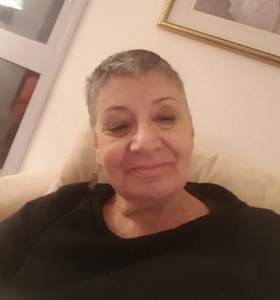 Sarita Hacohen was born and raised in Boston, and educated at Maimonides Hebrew Day School, graduating in 1965. She graduated from Brandeis University in 1969 with a degree in history. Since 1970 she has been a member of Kibbutz Amir, in the Upper Galilee in Israel. With her partner Ami, she raised five kids, and so far five grandchildren (but would like many more!). She served as library director for 30 years at two area colleges, and has a Master of Library Science from Haifa University and Master of Information Science from Hebrew University in Jerusalem. Since retiring, she works from home, translating and editing from Hebrew to English. She is active in writing groups and book clubs, and volunteers at the Rape Crisis Center serving the North of the country. She hopes to continue as long as she can, writing, reading, and contributing.

1 thought on “My Scars by Sarita Hacohen”