Feminism is important to me because everyone deserves the same opportunities and the same respect. Traditional gender roles, which limit the possible realms of experience for all involved, have been baked into our institutions, our interactions, and our self-concepts for eons and are still prevalent today. As a white, heterosexual male, I have a lot of privilege. I’ve spent a lot of years having the world reflect a “Thumbs up, buddy,” at me more often than I deserve. I’ve benefited in both concrete and fungible ways. It’s my responsibility to actively contribute to a more equitable redistribution of privilege. Helping put the voices of feminist poets out into the world is one small way that I can do that.

Ben Brezner is a second year teaching assistant in George Mason University’s Creative Writing MFA program, where he recently received the Mary Roberts Rinehart Award for Poetry. In addition to his role at So to Speak, he is also a managing editor at Stillhouse Press. A former middle school ESL teacher, Ben lives with his wife and cats in Arlington, Virginia. His poetry has been published in The Camel Saloon and Eunoia Review, and is forthcoming in DistrictLit. He blogs occasionally at www.benbrezner.com, and tweets @benbrezner. 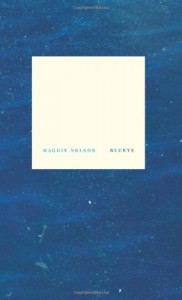 Brezner says, The many-sided splendor of the color blue becomes Maggie Nelson’s muse in Bluets. She gives herself up to blue, both literally and metaphorically, in this serial pastiche of a woman’s obsession with all things blue, including her own distance and apathy. The researched references provide objective inter-texts that undergird the subjective backbone of the auto-narratives that Nelson’s author-speaker, weaves. 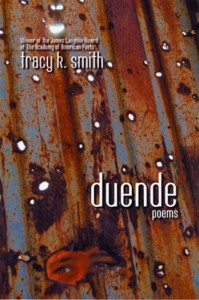 Brezner says, In duende, Tracy K. Smith moves through time and space to poke at both personal and public examples of injustice. Often blending lyric and narrative, Smith can be as serious as genocide, and lighthearted enough to invite Zappa to her family picnic. This wide range of modes and moods, allows Smith to capture the mixed emotions, the bittersweet-ness of duende’s dull ache.