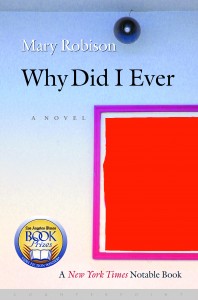 As a poet, I can sometimes feel a bit malnourished when it comes to my novel consumption.  If contemporary literature is a food pyramid, and a balanced diet is the fastest way to a healthy lifestyle, then I’m getting heavy servings of poetry, medium servings of short fiction, and, sadly, rather light servings of novels. So when I sat down to start Mary Robison’s Why Did I Ever, I was excited to read a novel, but also somewhat intimidated.

However, Robison’s novel reads more like a book-length poem in prose, or “novel in verse,” than it does a traditional narrative. With its short snippets of information—some just one sentence or even one word long, and the longest only a page or two—Why Did I Ever places the reader in the mind and lifestyle of a woman struggling with ADD, middle age, and a collection of loved ones who need impossible things from her.

Robison’s central character, Money Breton, edits Hollywood screenplays and commutes from her home in Louisiana to the West Coast, where she constantly deals with horrible co-workers and meaningless tasks.  At home, she is haunted by a slow trickle of news about her son Paulie, who has suffered a horrific tragedy in New York, and by the ongoing presence of her meth-addict daughter. Her closest friends are the unemployed but charming Hollis, a stalker boyfriend, and an insane neighbor she calls the Deaf Lady.

The most exciting aspect of the book for me is its form. The book’s 536 short snippets are each numbered and organized into several chapters. Snippets can be as short as:

Or as long as a complex scene, filled with dialogue, between Money and one of her co-workers or friends.

Often, the snippets themselves stand alone as painful glimpses into Money’s mind, and, in turn, the sad state of her life:

Something else that makes me angry is that I got too old to prostitute myself. I wasn’t going to anyway but it was there, it was my Z plan.

At other points, however, the snippets act in more narrative ways, to pull us from one scene to another and allow Robison to present us with only interesting content and cut out the transitions, exposition, and “filler” that can be so tedious. Here, in one short burst of a moment, we see what has happened after Money went out for a night of aimless driving in the last snippet:

A cop makes me pick up every last cigarette end that I threw away onto the lawn of Bell South.  Maybe seven hundred or eight hundred butts I saved up.  “Hands and knees, Missy.”

And in still other instances, the short snippet form allows Robison to present us with completely abrupt leaps—humorous and out-of-the-blue declarations or narrative moments that surprise the reader and leave us feeling as stunned and lost as Robison’s protagonist:

In my head now, the mixed-up words to rallying war songs. Do you never get to sort through and wipe disk that stuff?

The fast pace of these snippets creates constant immediacy for the beginning of each scene/confession/thought, while at the same time allowing for constant closure AND the luxury of a complete, 200-page narrative arc to fully flesh out each conflict and theme—in blunt, it’s a poet’s dream form. The form lends a true feeling of voyeurism—we get tiny glimpses into Money’s life but nothing lingering or in-depth—while at the same time lending an air of tragedy—that this is a life utterly fragmented.

But more perhaps more powerful than the form and all of its wonders is Robison’s narrator, Money Breton. Money is blunt, casual, and wears a coat of armor made entirely of sarcasm and flippance.  This only serves to make her more confessional moments, however, more painful:

I feel around in my handbag, extract something, use it, and put it back.  Later on I might need something else.  This is my life, what my life is really made of.

Money’s problems in life range from the enormous—her son Paulie’s New York exile with the Witness Protection Agency after falling victim to a heinous crime—to the mundane—she loses her cat. Her struggle with ADD is represented not only by the book’s form, which reads like little notes Money leaves to herself and symbolizes how short her attention span is, but also through the outright frustration she exhibits throughout the book about forgetting things—what she’s doing, why she’s doing it, or where she put things.

Money deals with her problems with varying degrees of heroism, and it’s the moments where she deals with them by writing letters to Sean Penn, for example, that truly represent the specifically “American” kind of loss and misdirection Robison is exploring here. Money makes the reader feel pride, frustration, hope, and sympathy—as all compelling characters do. She’s relatable in every sense of the word, allowing modern American readers to connect with her in a way that can be, at times, downright disturbing.

In this way, the power of the book all comes back to its form again. Robison’s form allows Money to constantly hit us with her defense-mechanism one-liners and her tiny, profoundly sad moments of epiphany.  The stripped-down minimalism of the form allows us to experience Money’s life as the desert of meaninglessness it is, while feeling the rare “high” moments of love and connection just as acutely, as here, when Money says of the broken son she constantly misses but speaks very little about:

I would give Paulie this fresh tomato, pat his curly hair.