The past few weeks So to Speak has devoted the blog to “Hispanic Heritage Month,” the official national recognition and celebration of the contributions made by generations of Latino/Hispanic Americans in the United States.

With a population totaling over 50 million, we at StS are aware that unique political, economic, educational, cultural, and linguistic dynamics are at play in each individual community within this broad classification. In our series we featured the voices of three Americans we felt represented significant segments of the Hispanic/Latino population in the nation.

George Mason’s very own Women Studies professor and professor of English at Montgomery College, Cuban American Dr. Elizabeth Huergo, entered the United States with her parents  a political refugee as a young child in the 1960’s. Huergo talked to StS’s blog editor, Sheryl Rivett, about how exile negates choice.

“Immigration can be very difficult, but at least there is some degree, however small, of choice. Exile obliterates choice. We are separated from everything we know (family, friends, homeland, language, culture), elements of our lives that deeply shape our identity. And exile also does great damage to our sense of agency in the world. The regaining, the reconstruction of identity and agency becomes the work of a lifetime, and that is not the easiest sort of work. Though if you can manage to endure, to persevere, there is a certain degree of joy to be experienced in that process of reconstruction—if you can come out on the other side.”

U.S.-born Frances E. Valdez, a Houston-based immigration attorney and activist, reflected on how she seems to frustrate people who ask her where she’s “from” and why she “cares” about immigrants when she hasn’t had relatives in Mexico “since the Mexican revolution around 1910.”

“Where were you born?  Houston, Texas. Where were your parents born?  El Paso, Texas.  Where were your grandparents born?  El Paso, Texas, Balmorhea, Texas and Ft. Davis, Texas. That is when people usually start to get frustrated and ask, Well, where is your family from originally? The actual meaning behind this statement is, you are a brown-skinned woman and brown-skinned women are not native to the U.S.” As to why she cares about immigrants: “Anyone who has ever experienced the feeling that you will never truly belong because of your gender, sexuality, skin color, ancestry, disability or a myriad of categories that differ from mainstream society, can develop sympathy for the immigrant struggle. When we recognize the similarities amongst oppressed communities, we realize that by fighting for justice for immigrants we fight for equality for all oppressed groups.”

The American Son of Undocumented Immigration

Poet Javier O. Huerta, a doctoral candidate in English at UC- Berkeley, identifies as a “Chicano poet from Nuevo Laredo, Tamaulipas [Mexico] who lived as an undocumented immigrant in Houston, Tejas from 1981 to 1981.”  We asked Huerta what it meant to him to be a 21st century feminist male and he told us of his work on a collection of poems inspired by the actress Lupe Ontiveros who told the New York Times that she played the role of maid 150 times.

“At the center of the poem is the problem of a double translation: “aspirar” as “to aspire” or as “to vacuum.” This is not really a choice for many poor women of color who for generations have had to turn to domestic work to support their families. Ontiveros claims she portrayed every maid she ever played with dignity and respect, so the 150 verses are my way of thanking her. The diversity of roles available to Latina actresses is definitely an important issue but one that should be tied with the more crucial issue of real life roles available to young Latinas. To be a 21st century feminist man means to support efforts that offer women more freedom of choice in their careers and in their lives and to oppose efforts that attempt to limit that freedom.”

Although the terms “Latino” and “Hispanic” are used interchangeably by media and interest groups, the decision to self-identify as one or the other is less a point of debate within the community (who tends to default to country of origin), and more a challenge for those outside who attempt to homogenize multi-ethnic, multiracial, astoundingly diverse millions. Since the surge of popularity of  “Latino” in mainstream media especially, however, the umbrella terms are lately perceived as less contentious, and as such their use is now on the rise over what some feel are the more alienating “Mexican/Cuban/Dominican/Salvodorean American” labels. 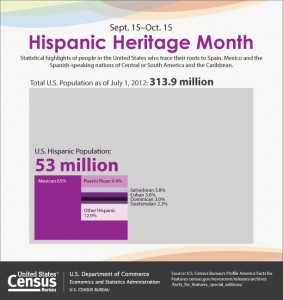 “I think we should be cautious about the use of “Latino” because it is being used to target us, as voters, as shoppers, and as readers,” said Huerta when asked about the rising popularity of the umbrella terms. “The more specific the better is what we teach our students.”

You don’t need to be a feminist to know the risks of engaging in sweeping, simplified generalizations, even and especially if, these are deemed the norm or “official.” We are proud to have introduced these three stories of feminism in action to the So to Speak community.  As American feminists and world citizens, it is imperative that we learn to recognize and value the myriad of experiences lived in Latino/Hispanic America.