Representing a selection of a writer like Judy Grahn is no small task. Grahn, a widely-renowned writer and activist, has been producing seminal feminist and lesbian texts in every genre of literature and criticism since 1969. She has contributed enormously to feminist rhetoric and philosophy through her writing and has stood on the front line of many political movements. 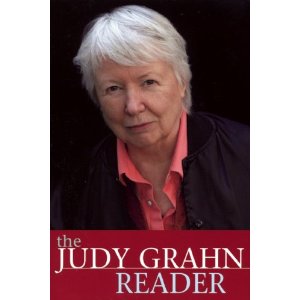 The Judy Grahn Reader, from Aunt Lute Books, is a wonderful and long-overdue collection of Grahn’s poetry, fiction, drama, and essays. Editor Lisa Maria Hogeland, who also wrote the book’s introduction, has done a remarkable job gathering together a representative and rich grouping of Grahn’s work. The most exciting thing about the book is that it collects and displays together so many different types of Grahn’s writing, each of which provide insightful context for the rest. To read this text is to witness, as best any reader can, a career and a life unfolding through the lens of literature.

The Reader begins with about 80 pages of Grahn’s most well-known poetry, including the revolutionary poems “The Common Woman” and “A Woman Is Talking to Death.” The section ends with two more recent poems, “Mental” and “To the Mother of All Bowls,” both from 2008.

The fiction section includes 11 selections from Grahn’s novel Mundane’s World and the two lovely stories “Boys at the Rodeo” and “Green Toads of the High Desert.” The Reader also includes the play The Queen of Swords (1987) and five non-fiction essays from Grahn’s critical texts. These essays cover everything from how to “really” read Gertrude Stein to the etymology of the words “bulldike” and “butch.”

I found myself feeling especially drawn in this text to the connections between the poetry and non-fiction sections. Grahn’s poetry is extremely political and very direct in its rhetoric—making for what read like political and social revolutionary manifestos set in verse. And indeed, in her critical writing, Grahn often quotes her own poetry or refers to specific themes brought up in her poetic work.

For example, in two different essays, Grahn explores the difference between the terms “common” and “universal.” She argues that commonality means “standing exactly where you and/or your group…are, and noticing what part of you overlaps with others who are standing exactly where they are” (287). The difference between commonality and universality, Grahn argues, is that commonality implies multiple different “centers”–many different selves speaking from their own vantage points–while universality implies just one center—one blanket way of relating.

This is an idea that Grahn beautifully conveys in the poem “The Common Woman,” which consists of seven intimate portraits of different women. Among them: a businesswoman, a waitress, a lesbian, a hitchhiker, and a woman who has had an abortion. Each section ends with the lines “The common woman is as common as a…”, completed by a different image each repetition. The poem ends with a fierce, powerful declaration of strength:

“the common woman is as common as the best of bread

and will become strong—I swear it to you

I swear it to you on my own head

I swear it to you on my common

Also fascinating are the lesbian themes that Grahn is partly known for—themes that connect across all the genres in which she writes. In one of her essays, Grahn draws fascinating connections between the word “bulldike” and an ancient female Celtic warrior named Boudica, who led a passionate, but failed, revolution against the Romans oppressing her people. Another essay,  “Writing From a House of Women,” explores lesbian literary communities and the significance and implications of writing from a lesbian identity.

These concerns appear in her creative work, as well, in which Grahn writes about many aspects of the lesbian experience, including introducing a partner to one’s parents (“Green Toads of the High Desert”), being mistaken for a 13-year-old boy (“Boys at the Rodeo”) and undergoing brutally sexist psychoanalysis (“Edward the Dyke”).

While making my way through the Reader, I found myself relishing the opportunities to flip between poetry and critical essays, fiction and drama, and see all the ways the genres spoke to one another, informed one another, and riffed off one another. It was amazing to read an essay and take in brilliant, reflective, and scholarly writing on a topic, only to see that same topic or theme beautifully and artistically evoked through poetry or fiction in another section. In short, what I loved about the Reader was witnessing the fluency with which Grahn speaks not one language, but many. This dexterity in multiple genres and forms of writing, perhaps even more than the content itself, may be the most politically-charged element of Grahn’s writing. And it’s one I will continue to admire and learn from for much more time to come.