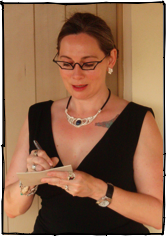 I first encountered Moira Egan’s name in the tiny office of my undergraduate poetry professor, where he asked me if I had been reading her. I had written a small iambic pentameter poem about getting picked up in a bar. Moira had already capitalized on this in her Bar Napkin Sonnets.

Next, I was to read for her in Rome (unbeknownst to myself) and get invited out to dinner with her husband and herself, along with the professors of my creative writing study abroad program. Over awe, red wine, and pesto-coated gnocchi she showed me writing poetry was the way to feeling fulfilled, and encouraged me to try my hand in a MFA program.

Two years later, as a So to Speak reader, I get the honor of interviewing this poet whose winged glasses and wild, yet tender, spirit is enough to make you feel like high-fiving her and hugging her at the same time; especially, after taking into account her poems whose themes often center around general love and loss, art and epicurean delights, but most importantly around the perspective of intelligent, witty, and intriguing feminist.

Why is feminism important to you? What does it mean to you?

To me, feminism is the default mode. How can any thinking person not consider him/herself a feminist? Equal rights for everyone: seems painfully obvious to me.

Along the way, though, I’ve had some real lightning-bolt moments of epiphany. In my otherwise enlightened middle school, the guidance counselor told me, in the 7th grade, how pleased she was that my standardized test scores hadn’t fallen. “Girls often start to have lower scores at this age,” she informed. This scared the hell out of me. “Why, what happens in 7th grade that would make girls stupid?” I asked, worried about some hormonal change that might affect intellectual development, or something I hadn’t read about in the health-class brochures. “Girls often become interested in boys at this age,” she explained, matter-of-factly.

“I’m interested in boys,” I told her, “but that doesn’t mean I’m going to get stupid.”

Saturday Night Fever. Even I, who had had a huge and visceral crush on John Travolta as Vinnie Barbarino on Welcome Back Kotter, was utterly and viscerally appalled by the way his character (and the film in general) treated women. Seventeen year-old me was so upset that I walked out of the theatre.

“Centerfold.” J. Geils Band. “My blood runs cold / my memory has just been sold. / My angel is the centerfold.” This sent me into undergraduate tailspins of anger on behalf of “[his]” “Angel.” Does he care why she has ended up commodified, as an object of pornographic desire? No, he’s only pissed off that his angelic Angel is no longer his own, private fantasy. He feels he’s lost ownership. It was a catchy song, a big hit, but I hated it for its disrespect for the woman’s autonomy.

And I read The Bell Jar when everyone else was reading Catcher in the Rye.

These early cultural experiences made me all too aware that there was still a battle raging. I went to a Catholic all-girls’ high school, and then I chose – and it was my first and only choice, as a matter of fact – to go to Bryn Mawr College, one of the Seven Sisters. I am fairly certain that this was the most profound life-changing context I ever experienced. There are many women who thrive in co-educational undergrad institutions, and I’m all for it, but I’m glad I spent those years in a profoundly female-friendly and very challenging environment.

And most recently, I saw that the first class of undergraduate women at Johns Hopkins University was having a reunion. I was reminded of the gender studies class I taught when I was a graduate student there. One of the students – a woman – was complaining about something or another, I don’t even remember, saying, “You know how they are, those feminists.” I had to stop the class. “Those feminists, huh? When do you suppose this fine institution in which you are studying first allowed women in as undergraduates?” I asked the class. “Oh, the twenties, the thirties, something like that,” they speculated. 1970. Nineteen-seventy. “Oh, those feminists.”

Who are your inspirations, either feminist or not?

Plath, and damn that oven. Edna St. Vincent Millay. Elizabeth Bishop. Old weird Yeats: when he can’t figure out how to be a man in the cage of his aging body, he speaks in the voice of Crazy Jane, a wonderful, bawdy crone figure. Lady Mary Wroth. My father. Shakespeare. Marianne Moore (who also went to Bryn Mawr, but long before I did).

Those are all poets, uh oh. My mother. Tilda Swinton. Caravaggio. Suzanne Valadon. Bach, who makes my viscera thrum. Jean-Claude Ellena, a true poet in a very different genre: he’s a master perfumer who creates fragrances that affect me in all kinds of ways, and that make me want to put them into language.

I’ve noticed a few themes running through some of your works—often a female perspective; a love and loss patterning, particularly physically; booze; art; other languages; and so many others. Is there any sort of method in choosing topics to write on for you?

You are very perceptive in seeing these themes!

I think the topics choose me. I have to feel something really deeply before it compels me to write about it. (Yes, that means that I’m not always writing, but when I’m not writing, I’m reading, translating, looking around, sniffing around.) To me, poetry speaks most resonantly when it’s very sensuous, that is, based in the senses, but also sensual in some way: seductive, inviting. Which is not to take away its intelligence: I admire poems that “embody” the intelligence of the body which, in poetry, is expressed, obviously, through language. I do not think that the old dichotomies, brain vs. heart or gut, body vs. soul, are very useful, so in my life as well as in my poetry, I am always on a journey to integrate these elements.

One can see after completing The Bar Napkin Sonnets and co-compiling Hot Sonnets that the sonnet is near and dear to your heart, any particular reason? Are you close to any other forms?

It’s a funny thing, me and my ongoing love affair with the sonnet. I guess I read a lot of Shakespeare when I was young and impressionable. And John Donne, who is probably my desert-island poet, and then later Millay. I feel at home in the form—I guess I do: by now I’ve written at least a hundred of the little devils.

Adrienne Rich said a useful thing about her early writing in form, that it was like asbestos gloves that helped her to deal with difficult subject matter. There’s something of that – a very nice man on RAI, the Italian radio, once said that my poems reminded him of explosives contained in a crystal box. That’s an aesthetic that interests me.

And an epiphany that I had kind of recently: as a German Literature major, in my senior year, I had to read Nietzsche’s Birth of Tragedy from the Spirit of Music, the one in which he talks about Apollonian vs. Dionysian artistic drives. It seems I was deeply scarred influenced by this paradigm. Certainly, the sonnet embodies the Apollonian in its great formal constraints, and yet many, many sonnets, from Shakespeare to Belli to Baudelaire to Millay to Berryman to Hacker to … have dealt with some pretty Dionysian stuff. Both as a reader and as a writer, I love that tension.

Last not least, since the original stance of the sonnet was the Lovestruck Male Speaker addressing his utterly unattainable Perfect Woman on Pedestal (think Dante + Beatrice, Petrarca + Laura, et al.), it sure is fun for a woman to turn that trope on its head and speak in a bawdy, bad-girl voice. And to speak to anyone “she” damn well pleases.

You were just published in Poetry Northwest, Congrats!! Can you give us an insight into what you’re working on now, or perhaps what you are reading currently?

I haven’t seen the issue yet, but I’m looking forward. (That is one serious disadvantage to living in Italy!)

I am working on several things. The poem that’s in Poetry Northwest is from a series of ekphrastic poems based on paintings by the French woman painter, Suzanne Valadon. If you’re not familiar with her work, you’re not alone. I think she’s every bit as good as just about any of her early 20th century male colleagues, but she’s better known as the mother of painter Maurice Utrillo.

This past summer, I finished writing a series called “Hot Flash Sonnets.” That probably doesn’t need too much further explanation, but one of the challenges there was walking the line between Nora Ephron and Elizabeth Kübler-Ross. While some of the poems are meant to be funny – even silly or goofy—they’re all focused on that idea of dealing with the aging cage of the female body. Getting old: well, it beats the alternative, right?

And in a sweeter mode, since I’ve been over here I’ve been working on a series called Strange Botany. Turns out my husband, Damiano, has this encyclopedic knowledge of plants; he loves our vegetable friends and takes very good care of them. So each of the poems takes a Mediterranean plant as its central metaphor, uses the Latin name for the title, and, after the example of my pal Marianne Moore, is written in syllabics. Love poems, with plants.

And—there’s a new sonnet series under construction. This interview contains many clues as to its subject matter J

Poems: there are so many it’s hard to say, but if I had to choose just one, it would be Bishop’s “One Art.” And that, of course, is a villanelle, not a sonnet, but to me it is one of the most perfect embodiments of form and content working together.

Novels: Perfume by Patrick Süskind. Pride and Prejudice. A new memoir that I absolutely adore is The Perfume Lover by Denyse Beaulieu. In it, she weaves three major threads: her own memoir of the life she’s led as a free-wheeling, free-thinking woman; the history of perfume and the perfume industry; and the amazing story of how she worked with a master perfumer to create a perfume that is based on the story she tells him of one beautiful night with a beautiful boy in Spain.

Good red wine. Strong dark chocolate. Yoga, preferably of the Jivamukti sort. Time away in the countryside. Watching Pride and Prejudice (the Colin Firth/Jennifer Ehle one) with Damiano, because I love to see him totally crack up at all the right moments. Good perfume.

And lastly, any words of advice for your fellow female/feminist writers?

Write. Read. Write and read some more. Follow your gut, honor your duende, and don’t let other people tell you what you should write or who you should be.

Moira Egan has a BA from Bryn Mawr College, an MA from John Hopkins University Writing Seminars, an MFA from Columbia; and is fluent in five languages. She has taught creative writing in a high school setting, and a collegiate setting in the States, in Rome and in Assisi. She is the author of Cleave (2004), which was nominated for the National Book Award; The Bar Napkin Sonnets (2009), winner of the 2008 Ledge Poetry Chapbook Competition; The Silk of the Tie/La Seta Della Cravatta (2009), a bilingual poetry/translation effort co-authored with her epidemiologist turned translator/loving husband Damiano Abeni; Spin (2010); and most recently, Hot Sonnets (2011), a compilation of over 150 steamy sonnets, co-complied with Clarinda Harriss. The word on the block is that the Hot Flash Sonnets are also in the works. Moira lives in the eternal city of Rome, is an avid football fan (especially if the team hails from Baltimore), continues to write and be published plentifully, and is a dear and wonderful friend. 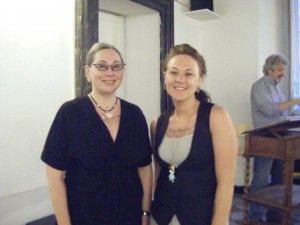 2 thoughts on “Interview with Moira Egan”