Fairy Tales and Feminism: Christina Collins on the Need to Retell

Fairy tales—a term that might not be considered “literary” in some circles, but So to Speak’s assistant editor Christina Elaine Collins will argue with you for days on end about the artistic, social, and various other values of fairy tales and of the importance of retelling them. In particular, she has a weakness—no, a strength!—for feminist fairy tale retellings, both reading and writing them. And with her publication of one such retelling in a new anthology from Tenebris Books—Willow, Weep No More—she offered to share her thoughts on what feminist fairy tale retellings should do and why she writes them.

Sheryl: It sounds like you’ve been interested in fairy tales for a long time. Can you tell us what your favorite fairy tale is, and your personal experience with fairy tales? 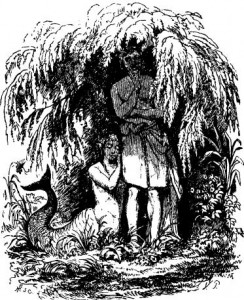 Christina: I can’t decide between The Twelve Brothers from the Brothers Grimm and The Little Mermaid from Hans Christian Andersen. These two tales have something in common: a mute heroine. That is, a heroine who must be silent to succeed. This fascinates me, and also bothers me.  One could interpret her silence both literally and figuratively—and where there is silence, there is potential for feminist revision.

My experience with fairytales started off like many people’s. As a child I was exposed to the Disney animated classics (the sanitized versions of fairy tales). But I was also exposed to Shelley Duvall’s Faerie Tale Theatre TV series and the Grimm’s Fairy Tale Classics anime series from Nippon Animation, both from the 1980s, and these gave me a better taste of the original tales. And then in adolescence I had quite the obsession with reading fairytale retellings. When I studied abroad at the University of Oxford years later, I wrote several of my own retellings for a creative writing tutorial. Before I knew it, I was writing my senior thesis on mute women in folk tales, fairytales, and feminist revisions, as well as a novel that would retell one such tale. It’s safe to say that fairytales, along with feminism, have always been on my mind.

Sheryl: Tell us about your story “Glint of Gold,” which is included in Willow, Weep No More. Where did you draw your inspiration from, and what were you trying to achieve in your retelling? 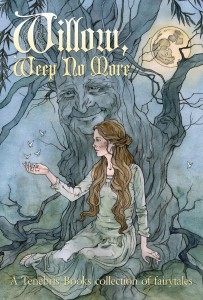 Christina: “Glint of Gold” draws on two lesser-known tales: “The Twelve Huntsmen” and “The Golden Goose.” I was first inspired to write “Glint of Gold” when I discovered “The Twelve Huntsmen,” a tale from the Brothers Grimm that I’d never heard of before. Many people are familiar with the “femininity test” motif in fairy tales—The Princess and the Pea, for instance—and The Twelve Huntsmen includes this motif. But I was fascinated by all the feminist potential the tale holds. It is progressive—or at least it was in the nineteenth century when the Grimms published it—in that it shows women successfully behaving like men, proving they can be just like men, and acting in a role (hunter) that was traditionally considered inappropriate for women. Unfortunately, the tale fails to reach that feminist potential; the women are presented as though they would have fallen into the feminine stereotype if they had not been warned about the femininity tests in advance. Plus, the ending, in which the protagonist marries the king despite his ridiculous tests, negates much of the female empowerment that the tale initially offers. In my revision, I changed these two plot points. And my aim was not to portray the king as bad or evil—trading one gender bias for another solves nothing, in my opinion—but I wanted the protagonist to recognize how unreasonable and restricting his tests are. In the end, my goal is to offer liberating alternatives, following in the vein of admirable feminist fairy tale revisionists such as Emma Donoghue and Angela Carter. I hope that “Glint of Gold” can contribute to that crucial literary canon.

Sheryl: Speaking of Donoghue and Carter, what works would you recommend to StS readers looking to read literary feminist retellings?

Christina: Indeed, Kissing the Witch by Emma Donoghue and The Bloody Chamber by Angela Carter are excellent places to start in terms of fiction. That is where I started. As for poetry, Anne Sexton’s Transformations is a must-read. I would also recommend Don’t Bet on the Prince: Contemporary Feminist Fairy Tales in North America and England, an excellent collection edited by Jack Zipes. And, of course, the other stories in Willow, Weep No More from Tenebris Books!

Christina Elaine Collins is a Pushcart Prize-nominated fiction writer, an MFA candidate at George Mason University, and So to Speak’s assistant editor. In addition to “Glint of Gold,” she has published other feminist fairy tale retellings in literary journals such as Jabberwock Review, Rose Red Review, Poiesis Review, and Cliterature Journal. She has been a writer-in-residence at the Kimmel Harding Nelson Center for the Arts as well as the Art Commune program in Armenia, and is represented by Kristin Nelson of the Nelson Literary Agency. You can find her on Twitter at www.twitter.com/CElaineCollins.