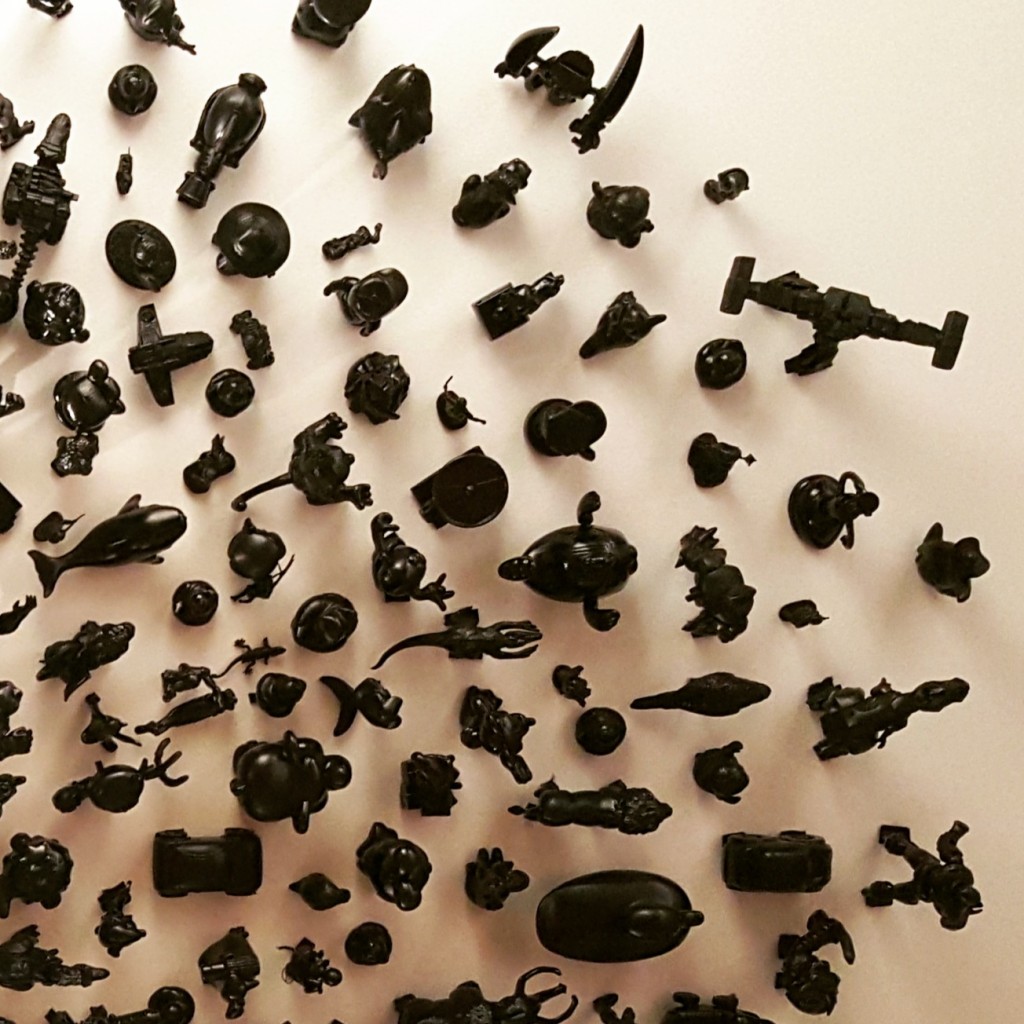 Currently on display at  Olly Olly in Fairfax, Virginia. Curated by our very own Art Editor Sarah Irvin.

Work will be on view Saturday, March 19th 7-8pm

For Domestic Territories, Washington DC area artists were invited to consider how they negotiate the use of household space with their children. The work in the show investigates physical and emotional spaces that are separate, shared or disputed. By representing the constant evolution of personal boundaries in specific parent/child relationships, the exhibit highlights topics that are publicly debated but only privately encountered. The exhibit makes use of the gallery walls, windows, ceiling, and bathroom. Artists explore the language their children use to claim space, lack of boundaries in the home, domestic aesthetics and how the artists themselves influence their children.

Milana Braslavsky’s photographs consider the aesthetic of a home shared with children by visually connecting the pattern and texture of children’s toys to the form of nesting cookware. Nikki Brugnoli covers windows in the gallery with imagery and text related to her current home in which her workspace has no door, and her bedroom, a redesigned office space, has a glass door. By blocking view from the outside world, the work creates privacy in the gallery, which Brugnoli aims to maintain in her home. Edgar Endress responds to his son’s use of toys as a way to claim territory, but instead of claiming a space for himself as an individual by blocking others from areas of the gallery, he rethinks his son’s impulse by placing toys on the ceiling. Billy Friebele hijacked electronic children’s toys and reprogrammed them to mimic the movements of his infant son in an interactive sculpture that responds to the movement and body heat of gallery visitors. The artist’s observations of a developing child are translated into a piece that allows the viewer to consider growth, development and the presence of electronics in the early stages of life.

Roxana Alger Geffen’s installation piece incorporates a window in the gallery and uses a combination of traditional mediums and household materials to consider how children invade mental space. Erin Raedeke’s still life paintings are constructed scenes using a combination of products and brands that represent both adult life as well as childhood. The paintings represent mark-making associated with childhood, crayon marks, alongside the mark making of adults, cursive handwriting, representing a blend of life’s stages in one visual space. Megan Wynne’s photograph, Home Birth, captures a moment familiar to most living with toddlers. The scale and detail of the photograph confronts the viewer with an intimate setting in the public space of the gallery, foregrounding the blurring distinctions of self and other that take place when raising children. Fabiola Alvarez Yursicin’s piece uses glow in the dark material as a way to consider how children absorb, alter and then reflect a version of the attitudes and habits of their parents.