Date Rape Actress | How to Be a Woman | by Andrea Rogers

If you kill the bird”

At sixteen, she felt it

when the man gave her

And so she became a bird,

buoyed, looking upon the body;

back and forth ’til morning, when,

the vomit drying on its lips,

it slept, and drooled,

How to Be a Woman

Accept now that you are always wrong.

If a man hits on you at a party,

it must be your fault.

If he puts something in your drink,

you should have paid

If something worse happens –

if the man begins to touch

your breasts while you lean

against a bathroom sink

and vomit in the dark,

if he does this and doesn’t stop,

and his friends are there

to watch, and no one

moves because they don’t

know what to do,

then of course it is your fault

and they were right,

you should have never left

the house that night. This never

Andrea Rogers is a poet, musician, and postdoctoral fellow at Georgia Tech, wher 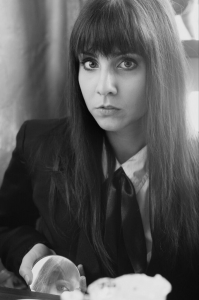 e she teaches writing. She is the recipient of the 2015 Agnes Scott Writers’ Festival Poetry Prize, judged by Tracy K. Smith, and two Academy of American Poets awards. Her poems appear or are forthcoming in Hunger Mountain, The Adirondack Review, American Journal of Poetry, District Lit, Atticus Review, and anthologies by Black Lawrence Press, Negative Capability, and Red Paint Hill. She and her band, Night Driving in Small Towns, have been featured by Rolling Stone and NPR.