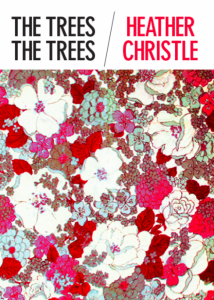 I promised myself I wouldn’t gush too much in this review, but then I flipped through Heather Christle’s The Trees The Trees again and realized that this may be all I’m capable of doing for the next several hundred words. Stick with me, and I’ll explain to you how this book is an at-times funny, at-times gutwrenching, always honest, and always exciting collection of poems that I can truly say, in classic, cliché reviewer terms, leaves me waiting eagerly for Christle’s next endeavor.

Last summer, I, like many others, called Heather Christle up to hear her read me a poem from The Trees The Trees. She wowed me with the second-to-last poem in the book, “Trying to Return the Sun.” My excitement about Christle’s work only increased with each poem I read in the rest of her book.

The poems are surreal—people talk to trees, turn into trees, and hang out with half-man, half-hedgehogs. The “I” voice leading us through these poems, however, is very real, and very likeable—childlike in her wonder at what she sees, yet adult in her longings:

Formally, all the poems are the same—a justified block of prose, free of punctuation and all lower-case except for the chatty “I” leading us through, with small gaps between phrases signifying as “line breaks” without breaking the line. This simple, unassuming form allows the voice to undercut itself, make jokes, plead, and pose innocent, even naive questions and observations about the world—without all the melodrama of free-verse line breaks. Visually, the lack of punctuation, combined with the internal spatial gaps, creates a crisp, minimalist presentation devoid of both trite sentimentality and high academic self-indulgence. It is just simple. Really. Simple.

What’s fascinating for me about the form, though, is that in the end, when reading the poems aloud, it’s hard NOT to read the internal space breaks “dramatically”—what I mean by that is, the sonic effect of all the white spaces within the prose is that of gasping, sobbing, stuttering.  Dramatic—yes. Melodramatic—no. This unassuming, quiet, and totally honest quality of the voice and form of Christle’s poems is what makes them break my heart every time, as in “The Whole Thing Is the Hard Part” here:

you have to live where the house lands on you

what else can you do    your bones are all broken

and somebody loves you    who is it    tell me who

you live in it

Of course, the “sobbing, gasping” sounds in the white space is not their only effect. They also allow Christle to subtly but deliberately convey her humor on the page, as she does here in “1998”:

one time this real moon was trying to arrest me      I

There is much more to be said about these poems: their startling, delightful turns toward closure, Christle’s stunning, frank observations (“This is not the body I asked for/the thing is/you can’t send it back”), and the masterful use of the absurd/surreal to create emotional resonance (the speaker, for instance, is frequently, and happily, giving her body parts away). Christle’s poems are fascinating to read deeply for their craftsmanship and sentiment.

1 thought on “Candor, Humor, and Fine Craft: The Trees The Trees by Heather Christle”