Butterfingers are Revolutionary | by Athena Dixon

Over the years I chastised myself for being naïve, for inviting him to stay the weekend. That second guessing is what stopped me from telling anyone and stopped me from reporting it to the campus police. I couldn’t be convinced I wouldn’t be blamed. And I think part of me was concerned the carefully constructed woman I was becoming would be undone.

It wasn’t until I was standing in the aisle of a local market that I realized how trauma ripples. I was standing there, holding a Butterfinger in my hands, trembling. I must have been a sight, maybe a stereotype. A fat, black woman contemplating food in a public space. But I was trying to figure out how many years had passed since I’d tasted that sweetness. There I was, in my 30s, afraid of a candy bar. It had been nearly a decade since I’d allowed that taste to pass my lips. That day, in that aisle, I decided I wasn’t going to be afraid anymore. So, I bought it and forced it down. I conquered it and let myself remember why I stopped eating Butterfingers in the first place.

I met Jason on a telephone chat line during my final year of undergraduate school. This was the early 2000s by then and I’d just been introduced to Yahoo! chat rooms and AOL instant messenger. Some days, I worked double shifts at one of the dormitory’s front desks so I had a lot of time on my hands. In the quiet of those empty lobbies or the darkness of my bedroom, I was popular. I seemed nice and safe, like the girl next door. There were times that innocence caused my inbox to overflow with men furiously masturbating into their phones, begging for a return message or a live chat. I didn’t know how do anything other than blush and move to the next message. I searched for someone to treat me like a human being. I waited for someone to see me.

On a campus where I felt largely invisible, being deemed attractive was all I ever wanted. I hung out with my friends at frat parties, attempted to pledge a sorority, joined social clubs, and performed at open mics. All of these things terrified me and, more often than not, I ended up on the fringes of the room, quiet and nearly forgotten. So, when I was seen on that chat line, it was like the light had finally shifted to me.

Jason had the quintessential New York accent, so different from my flat Midwestern tones. From his first message, I was intrigued. He’d relocated from one of the boroughs, I can’t remember which one, and settled in a town about a half hour from campus. I’d never lived more than forty-five minutes from my hometown and the idea of a man from a fantasy city such as New York made me feel sophisticated.

After a few hours of the thirty second messages the line allowed, we exchanged phone numbers. I’m not sure when I decided I wanted to meet him in person, but a month or so later we’d decided he would make the trip down the highway during a weekend I wasn’t working.

Jason arrived on campus via taxi and when he stepped out he was nothing as he’d described. When his body unfolded from the car the slick New Yorker I was expecting was instead a scruffy bearded man in oversized clothes. He was pigeon-toed and with each step I could hear his soles slipping over the pavement. However, the voice that first attracted me was still there and in the moment that was enough.

When he pinned me to the sofa, all I could focus on was the smell of Butterfingers on his breath. Then I focused on the press of the tweed sofa into my cheek, remembered my mother had purchased it for me at an estate sale. And then I focused on his hands trying to pry apart my thighs.

Come on. Let me rub you to sleep. We both need this.

He’d come into the darkened living room to find me faced into the back of the sofa, hoping the sight of my sleeping body would dissuade him from touching me again. Earlier, he’d come into my room and moved into my twin sized bed. I’d forced myself to be polite lest he become violent.

I am sure his bulk pressed me into the sofa for no more than a few minutes and I can remember thinking how loudly I should scream to attract help. I couldn’t move, couldn’t breathe anything other than the sweetness of his breath.

Come on. I can’t sleep. You can’t either.

I remember holding his hands down as best I could, telling him to stop, telling him no. And then things go black. I don’t remember how I moved his body from on top of mine or how I ended up locked in my bedroom. I have no recollection of calling a male friend to help me and how in an instant Jason was gone. Until he left me voicemails asking why we couldn’t see each other again. Until he grew angry in those messages because I never picked up the phone. Until finally I graduated and that phone number became one I no longer remember.

Over the years I chastised myself for being naïve, for inviting him to stay the weekend. That second guessing is what stopped me from telling anyone and stopped me from reporting it to the campus police. I couldn’t be convinced I wouldn’t be blamed. And I think part of me was concerned the carefully constructed woman I was becoming would be undone.

A decade later, when I found myself in that aisle, shaking at the sight of the bright yellow wrapper, it was then I truly acknowledged that night. Until then, it had been a specter at the edge of my life, a shadow in the room whenever I disrobed and let a man touch me. It would take me several more years to take control of my wants and needs, casting out Jason and the fear that came along with him. Butterfingers are still a rarity, but I’m no longer afraid. Instead, I’ve learned to swallow the bitter and keep the sweetness on my tongue. 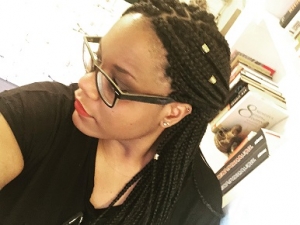 Born and raised in Northeast Ohio, Athena Dixon is a poet, essayist, and editor. She is Founder and Editor-in-Chief of Linden Avenue Literary Journal, which she launched in 2012. Athena’s work has appeared in various publications both online and in print. She is a Pushcart Prize nominee (2016, 2017), a Best of the Net nominee (2017), a Callaloo fellow (Oxford 2017), and a V.O.N.A. fellow (2018).  Additionally, she has presented at AWP (Boston 2013) and HippoCamp (2016, 2017, 2018). She is the author of No God In This Room, a poetry chapbook , published by Argus House Press. Her work also appears in The BreakBeat Poets Vol. 2: Black Girl Magic (Haymarket Books). She writes, edits, and resides in Philadelphia.