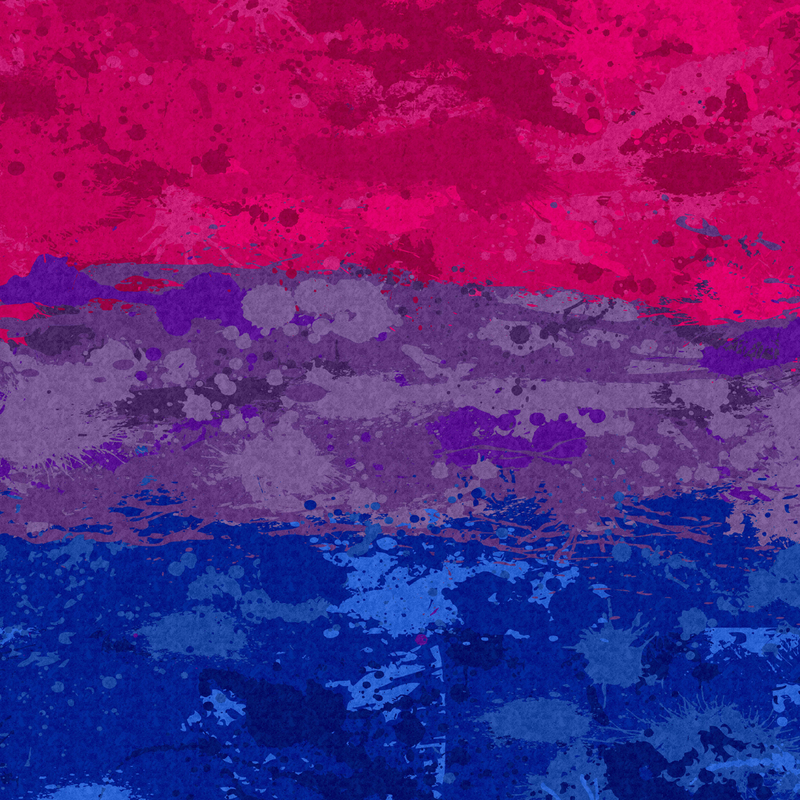 “LGBTQIA+ folx are not a monolith. We deserve to hear more stories than we have been told. We deserve narrative plentitude—so many stories that no single story or person has to serve as representative for the whole. We deserve to not just feel joy, but to share the infinite ways we have experienced it.”

How much joy is a bi character allowed in a narrative? Where does this joy appear in the story, and how long does it last? What are sources of joy for bi characters? Bi inclusivity, in its most basic form, acknowledges the need for representation and the need to work against bisexual erasure. But how can we move beyond this and consider the ways that bi characters can thrive on the page? This is a craft issue in its influence on both character and plot, but it also extends beyond the confines of craft. In her essay “They, Them, and Us: Language and a Demand for Change,” Rachal Marquez Jones writes, “I can finally find a book with a love story and a happy ending for a character who is bisexual like me. And there is such a joy in feeling seen” (199). Fiction that includes bi representation has the ability to resist both the narratives that deny the existence of bisexuality and the narratives that acknowledge bisexuality but dwell in trauma and tragedy. When considering representation of marginalized peoples, it is important to remember the humanity of readers and the stakes of representation. Fiction is an integral part of culture that has the ability both to be influenced by and to influence social norms.

As B. Tyler Lee writes in “On Queerness, Neurodivergence, and Nuance: Creating Authentically Complex Characters,” “…characters’ whose identities and experiences exist at the margins shoulder an additional burden—for readers with limited experience, the character may become the primary representation of that identity” (83). While Lee is primarily discussing this in the context of stereotypes in fiction, one might consider the place of joy as it relates to representation and identity as well. What is presented as conceivable in the vast possibilities of fiction? If bisexuality is not represented often, then more (unfair) pressure is put on the representations that do exist. Just as bisexual readers can grow weary of stereotypes such as promiscuous bisexuals or bisexually-coded villains, so too can they tire of stories that lack the love, hope, and optimism that is available to other sexualities in fiction, especially heterosexuality. Not every story with heterosexual characters is upbeat, so the same demand cannot and should not be made of bisexual characters’ stories. But when bisexual people would like escapism with someone like themselves included, or when bi people would like to have non-bisexual people have a window into their lives that is not entirely tragic, then it is not sufficient to only have stories about death, heartbreak, discrimination, and despair.

The argument presented here is not that all bisexual characters should be happy, nor is it that there is no place for stories that allow bisexual characters to coexist with heavy themes. There is space for stories that explore the death of a lover, epidemics, and bi-specific problems such as biphobia and bierasure. However, there should be a variety of bisexual stories available, including ones with happily ever afters. When writing about The Queer Joy Project, Aimy Tien describes its focus on the “daily lived experiences, moments of happiness and serenity—each a form of resistance against today’s political climate” (para. 2).  What opportunities exist in plot and characterization to allow bisexual characters joy, whether in the romantic/sexual areas of their lives or otherwise?

Written in the Stars, a romance novel by Alexandria Bellefleur, demonstrates a variety of ways in which a bisexual character is able to find joy. Bi protagonist Elle has her share of tensions in life—she is trying and failing to find love, she has a family that doesn’t believe in her dreams or career and belittle her for it, and she has a fight with love interest Darcy. However, all narratives have tensions; tensions shape stories. The consideration of bi joy is not a dismissal of the need for tension. Rather, it is an opportunity to infuse elements outside of tension (especially tension that manifests as trauma and tragedy) in a bisexual narrative. Building in contrasting highs and lows in this way can heighten the emotional complexity. Where are the moments of joy in the plot? What does the character derive joy from? How fleeting are these points of joy? In creating a dearth of bi joy, fiction sends an implicit message that bisexuality and joy are incompatible in life.

Elle derives joy from three separate sources in Written in the Stars, which demonstrates the potential for her to find joy both inside and beyond the confines of her sexuality. Elle takes joy in 1) the idea of love, and eventually in her relationship with Darcy, 2) her career and its focus of astrology, and 3) her friendships, especially with her best friend Margot. In terms of characterization, Elle is optimistic. She believes wholeheartedly in love, and this belief brings her joy. In some ways, this is a means of taking joy in her bi identity. This is only enhanced by the plot of the story. Her first date with Darcy doesn’t go well, but they agree to pretend to date so that their families will stop bothering them about finding a partner. Elle eventually falls for Darcy, which is mutual. They take joy in one another and in their relationship. Elle shows Darcy a beautiful place to see the stars on her old campus, and shares the way that the stars uplift her. Elle and Darcy also have a very happy sexual relationship, which the plot allows to have some breathing space among other tensions.

Bellefleur’s representation of a bisexual character in a happy (but not flawless) relationship is one form of resistance; this resists the ideas that a) bisexuality doesn’t exist, and b) bisexuality cannot coexist with happiness. But Bellefleur takes this even further. She resists the idea that bi joy is either fleeting or impossible by characterizing Elle with long-term joy in areas of her life that are not related to love or her sexuality at all. Elle takes great pride in her work with astrology and doing readings for people, especially via social media. She left astronomy, which was the path that her parents would have preferred and was an ostensibly safer choice. However, Elle has followed the career path that brought her joy. As of the beginning of the novel, this career path has also brought Elle success via a contract with a start-up dating app.

Allowing a bisexual character to derive joy from her work is humanizing; Elle can find joy in her work as anyone can. But it helps the reader to connect with her as well. By knowing the work which a character finds fulfilling, the reader has a deeper understanding of that character. It is also a strong option for characterization because the bi character does not need to find romance or sexual satisfaction in order to be happy in their day-to-day life. Such a character is not defined by their sexuality, even as it is an integral part of their life and identity. And, if a bi character does find romance, they might start their relationship in a better emotional place because they have already found something fulfilling on their own without needing to depend on a partner to be the pure source of joy in their life. Careers and hobbies are part and parcel with characterization. A bisexual/biromantic character should exist beyond the aspect of romance/sexuality; to limit a character to their romantic life risks the character becoming someone flat and static who the reader has trouble connecting to because they know so little about them. What are their motivations? Desires? Dreams? Making a character bisexual and/or biromantic is not the beginning and end of the work of characterization any more than that would be the case with a heterosexual character.

Even further, Bellefleur has written into the character’s backstory and main plot a best friend with whom Elle has a safe, happy, and supportive relationship. Margot is Elle’s business partner and helps her pursue her dreams. However, Margot is also supportive of Elle outside of her career, including when things are difficult with Elle’s family or with the relationship with Darcy. This is a craft decision that helps to strengthen the emotional core of the bisexual character in question. When such a character has healthy platonic bonds, they will not need all of their emotional support to come from a potential romantic partner. This also grants freedom and safety for the bisexual character because they can rely on love and support from multiple sources.

In many ways, it is the combination of sources of joy that makes Written in the Stars such a standout example of bi joy. Bi characters should be able to find joy in their sexuality and romance; just as importantly, bi characters should have other opportunities for joy. Elle’s family does not deride her for her sexuality, but they are not at all supportive of her career or her interest in astrology. However, she does get this support from Margot. Further, Elle finds joy in her career, regardless of her family’s approval. Elle’s characterization as someone who is optimistic and doesn’t require the approval of others (though she appreciates it when it happens) strengthens her ability to experience joy as a bisexual character.

When writing a story with a bisexual/biromantic character, where are there opportunities to infuse joy? Does the character experience happiness in their sexual relationships, romantic relationships, and/or platonic relationships? Does the character experience happiness in their career and/or hobbies?  If a bi character’s joy were mapped out in the plot, are those moments of joy few and far between, or does any source of the character’s joy last beyond a single scene? Do bi characters get to have a happily ever after, or even a happy for now ending? The stakes of craft should be contextualized in the stakes of representation. Or, put more simply, consider how fiction has real-world sociocultural effects. And where joy is represented for bisexual characters in fiction, the narrative that bisexual people in real life cannot experience joy is chipped away and resisted against.

Audrey T. Carroll is a Best of the Net nominee, the author of Queen of Pentacles (Choose the Sword Press, 2016), and the editor of Musing the Margins: Essays on Craft (Human/Kind Press, 2020). Her work has been published or is forthcoming in Prismatica Magazine, peculiar, Glass Poetry, Vagabond City, So to Speak, and others. She is a bisexual and disabled/chronically ill writer who serves as a Diversity & Inclusion Editor for the Journal of Creative Writing Studies. She can be found at http://audreytcarrollwrites.weebly.com and @AudreyTCarroll on Twitter.