Click the ‘Read More’ link to listen to the author read her open letter – it’s to herself, and it’s to you:

Hey.  I know we haven’t talked in a long time and I’ve ignored you off and on since age 7, but I’ve been hearing a lot about your friends in the news.  You guys are positively dominating social media!  A hashtag even! It’s awkward for me and makes me anxious, but I’m happy for you and the recognition you’re finally getting.  I know you’ve tried to speak-up over the years, and I’ve silenced you repeatedly.  I was embarrassed of you, and you made me feel weak (still do); you’ve always been the stronger of the two of us. Mentally, I mean- I still think I’d win in an arm wrestle.

I have to say, I didn’t realize you were in such great company!  So many women from all walks of life are coming forward with stories. It’s like a big ol’ book club with the guzzling of shame instead of wine. Over the years I have made excuses for those slick-tongued, grabby-handed men and had you absorb the blame; I’m sorry.  I always thought it was part of the fabric of being female; the badge you wear that you didn’t enjoy earning. Sort of like an ill-fitting uniform that leaves you bloated with self-doubt and insecurity, but hey! It’s in all the magazines, everyone’s wearing it, so it must be cool.

I know I told you that you shouldn’t make a fuss… shouldn’t rock the boat.  I`ve told you hundreds of times it was ok when it wasn’t.  I made you take the blame because maybe I liked it when he looked at me.  I even liked it when he moved in to kiss me, but I swear to you: when he slammed your head against the brick wall and forced his hands up your shirt, it was not the love affair I had in mind.  You felt guilty about that, and I tried to convince you that you deserved it because you liked him. You didn’t deserve it. Not then, not ever.

You’ve met Weinsteins.  You’ve devised off-the-cuff plans to escape from Smiths, Joneses, Johnstons… and I use completely arbitrary names because some part of me still feel he need to protect these creeps. You crawled out of a bathroom window once when your ‘no’ was his ‘yes’- remember that?  Instead of comforting you, I joked that you’d be a very successful cat burglar. I owe you an apology and a hug.

What I really want to say is, I should have let you cry when you were walking home alone from school in Grade 2 and the guy in the orange Beetle masturbated in front of you in the parking lot. I know you wondered why there was hair on his penis and why he was making those guttural sounds; you were so little and had every right to be confused.  I know the way he looked you dead in the eyes as you walked stiffly past his car made you feel fear like a temperature for the first time; a ball of icy cold that didn’t melt for months. You wanted to tell mum, but I convinced you that telling would make you bad.  You weren’t bad; he was a sick individual who had no business doing what he did, to you or anyone else.

That ancient driving instructor who’d put his hand on your thigh every time you were in his car?  I should have let you break his fingers like you wanted to.  I wanted to pass the course, and I thought that speaking-up would make him fail me.  Instead, I failed you.

Let’s hunt down the guy who lifted your skirt up while dancing and grabbed your ass.  Oh, and the guy at the bar who put his hand down the front of your pants while he held you tightly with his other arm?  The one who looked like a Kiss cover band roadie and was built like an oak tree?  We’ll find him, too.  Or the moron who chased you down the street yelling ‘nice shitter’ until you had to hide in the record store? You remember him.  He waited for you outside then followed you to the bus and called you a ‘bitch’ when you didn’t swoon at his sweet talk. I told you to keep your mouth shut. You wanted to bust his filthy mouth; I said just walk faster, because, really, if you walk fast enough sometimes you can outrun the film that loops in your mind. Let’s find them- all these men- sit them on uncomfortable chairs and try to talk some sense into them. Maybe we can invite their parents and try to figure it out where it all went wrong.

Sweet girl, I’m sorry that when you were assaulted in broad daylight while on break from work, walking back from getting your friend a birthday cupcake. When I tried to talk you out of calling the cops, I was wrong. And when you cried while recalling the episode to your coworkers, I apologize for being embarrassed and disgusted at the way you couldn’t even properly talk through the tears and the snot.  I just wanted to get you home and silenced.  The trauma of the phone call from the sex crimes unit was more than you could handle, I know. They told you it was a good thing that this would go in the RCMP database in case something similar happened to someone else under similar circumstances. I made you crack stupid jokes because I was so nervous.  I didn’t understand what your clothing size had to do with anything, and I made you repeat one too many times that you wore a crew neck and a cardigan and had no idea why that guy would do what he did.  You tried to jump in and say that the brand of your underwear was irrelevant, as he couldn’t see it when he made his mind up to run at you, but nope- I clamped my hand over your mouth.  You internalized everything and somehow convinced yourself that carrying a cupcake down the street at 2pm made you ‘have it coming’ because you chose to wear a knee-length dress that day. Or maybe it wasn’t the dress; maybe it was your boobs. They were fully covered, I know, but perhaps they should have been bound completely so avoid any untoward advances.  I hear that duct tape really does the trick. Regardless, I know that phone conversation destroyed you.  I asked you to laugh about it; to tell people about it like it was a real riot.  None of it was.  That was MY way of getting through it. Guilt is heavy; levity is helium.

So, here’s what I propose: I’ll stop accepting bullshit behaviour like this and I’ll start validating your feelings. I borrow strength from the millions who’ve also spoken their truths. Look around!  There’s so many others just like you.  And we can’t dog on all men; there are plenty of gentlemen out there.  You’ve met a ton and you’re raising three. Now come over here and hug me with both arms. You’re smiling! It looks like it’s way easier for you to breathe without your muzzle. 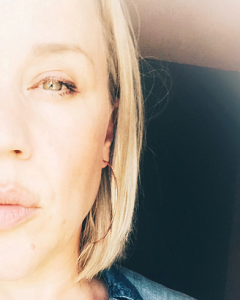 Hailing from Hamilton, Ontario, Jenn Seager is a full-time Executive Assistant and part-time day dreamer. Her work has been published in places such as Canadian Living, Mothering Magazine, and The Feathertale Review. When she’s not enjoying time with her triplets, she’s cross stitching, doodling, and pretending she can still read without her glasses.