A Review of Robyn Schiff’s “A Woman of Property” 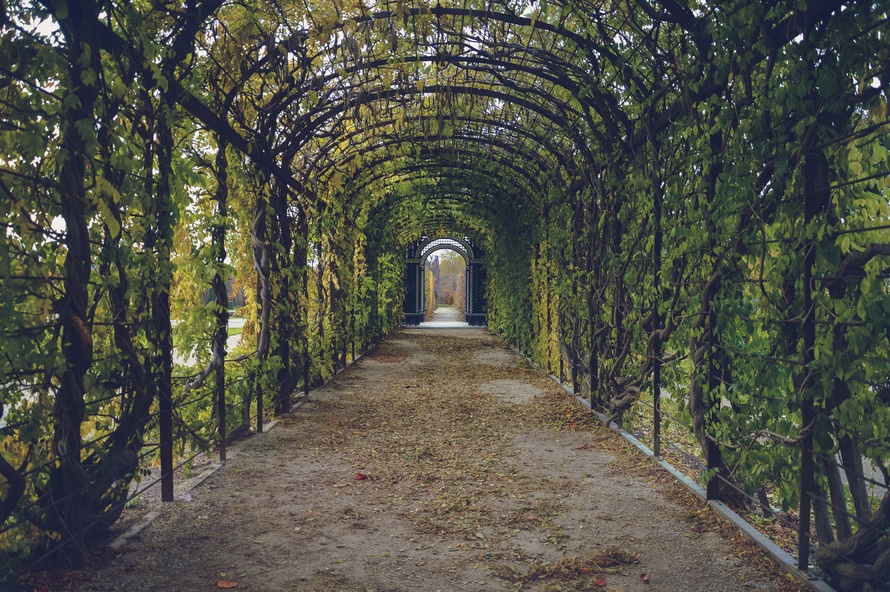 A Woman of Property

In Robyn Schiff’s A Woman of Property, weeds grow through every domestic space. A nail turns the nursery chair perilous. A doe may or may not replace a girl on an altar. Schiff drops her reader at a fluctuating border, though we don’t immediately know it. Instead, she directs us to a storybook, the tale of Benjamin Rabbit, whose sense of belonging in the garden, or, from another perspective, whose inhabitance of a space not his own, finds him in need of rescue. Throughout the collection, the risk of trespass—on ground, on property, on imagination, on one’s own self—pervades.

Here, every figure in every field is hunted and “every dream/begins at a threshold.” The poem “Gate,” not only serves as an entrance to the collection, but also instantly highlights the inescapable choices one faces on arrival at a border. Schiff’s speaker navigates the collection’s edges, fields, and gardens shadowed by the choice of whether to enter or exit or remain an observer, shadowed by the choice of how to make up one’s mind, but the choice often dissolves into illusion. Schiff’s speaker is affixed to a swinging gate. Through this first-person speaker, Schiff positions her reader beside her on the gate throughout the collection. Both speaker and reader find themselves caught in the scenes before them, thus becoming implicated through the observational act. In “Gate,” after describing a friend’s hunting methods, the speaker states: 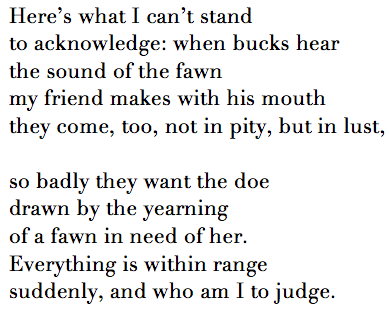 In Schiff’s fields, pain is always an attraction. Even Schiff’s speaker finds no reprieve from this rule, equally drawn to the roles of hunter and hunted. The “range” spoken of in the poem is not the hunted’s salvation, but an acceptance of its pain and the method by which that pain is relieved.

Schiff moves her reader between the roles of enactor, inhabitant, and outsider. Her poetics build a world in which this anxiety of role in relation to scene seems not only inevitable, but necessary. Schiff foreshadows this sensation at the conclusion of “Gate”: “I was caught/up in theatrics/and forgot whose/theater this is.” Throughout the collection, the reader will be drawn into a poem only to be reminded of this moment. We are in Schiff’s theater, but while traversing the dissolving borders of her poems it is easy to forget. Schiff skillfully blurs lines of ownership of her own text. In each poem, ground and figure are destabilized. Often, what seems the central argument fades into the background or turns out only to be central because we have happened to wander past it late in the poem. We witness the death scene only because we are within view of the bullet. A woman is sacrificed only because she is present for the sacrifice.

The references to the theater also draw attention to the performative aspects of Schiff’s work. In “Gate,” the performance of the hunter’s doe-call mimics the erotic performance of the male deer, which in turn mimics the performance of the poet herself—“I was caught up in theatrics” admits the speaker, drawing attention to the limited perspective. A reader can’t help but feel the weight of their own subjectivity. At the conclusion of “Gate,” the speaker’s imaginative enactment of the scene (“spring comes”) carries past the reality of the hunt, but then the scene is revised in order to reflect the stag’s fate in the field (“no. He takes/ a bullet.”). Yet because the revision is laid bare to the reader on the page, it functions less as a revision of thought than an enactment of one. In this, the poet maintains control of the scene. Often, the question of ownership concerns not things, but scenes—the audience watches the speaker watching the field. But there is also the sense that without the poet, we would go on thinking that spring had indeed come. We need the poet just as she needs us. 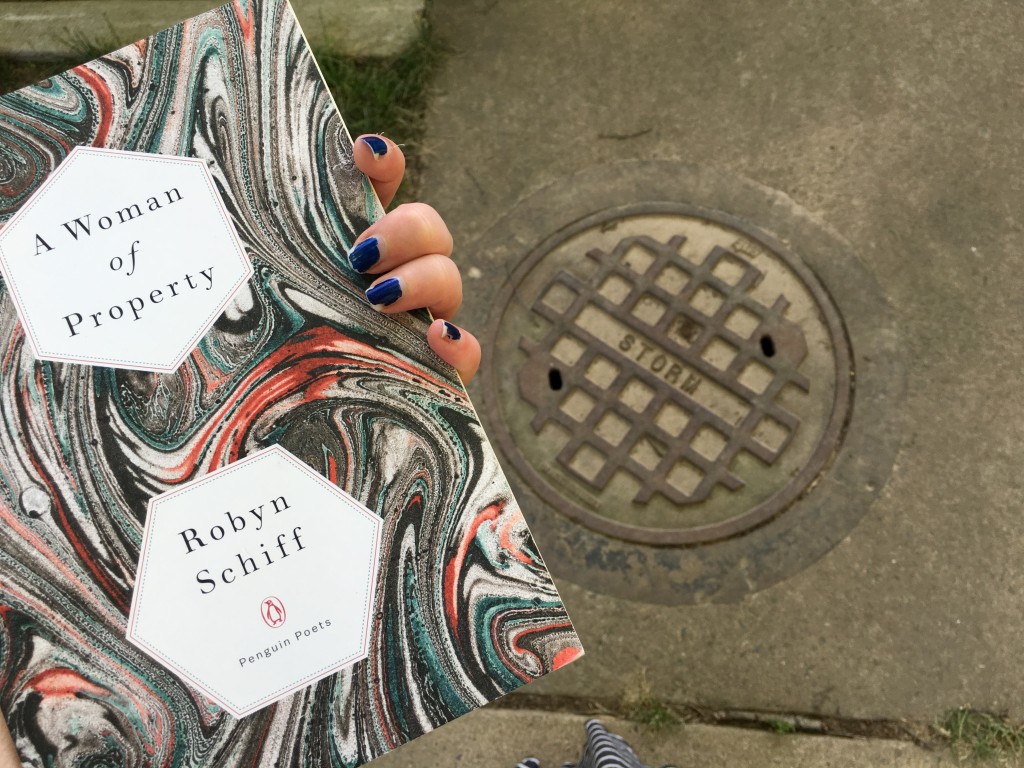 Schiff deliberately draws attention to the poetic craft at work in her poems. In “Houselights,” she points to her line breaks, which throughout the book extend a line’s meaning in multiple directions. Here, she draws attention to her own performance of line: 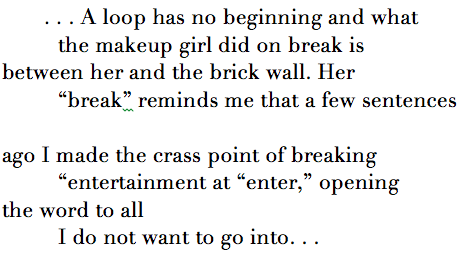 Schiff simultaneously highlights an already highly self-conscious line break, but admirably (and, perhaps, shamefully) continues to play on its resonances in the word choices “opening” and “go into.” Yet this indulgence in language speaks to the performativity of poetry. Schiff’s willingness to acknowledge the self-conscious craft in the work while continuing to do it is a nimble navigation of what it means to consciously construct a thing out of language—and of how to open a word and spill it.

From the beginning poem’s title “Gate” onward, the emphasis on opening and unwanted entrance draws a thread through the collection. In “A Hearing,” Schiff constructs a field—or, one can’t help noticing an echo in the title, a clearing—from legal language by juxtaposing courtroom language of consent and a disputed space between properties. In a literal sense, the poem describes a dispute over an overgrown strip next to the speaker’s driveway. However, Schiff also embeds the language of bodily consent in the conversation and thus examines the ambiguity in which women must learn to navigate ownership of a body. This ambiguity arises from culturally dictated boundaries of a woman’s body—boundaries both sought and imposed. “A Hearing” suggests that this ambiguity is in part derived from not knowing how the body may receive transgression until it has been transgressed upon. Schiff acknowledges this uncertainty: “Are you saying you / consented? Not // exactly. But you said ‘Yes’ I didn’t say ‘No.’” Ultimately, Schiff’s speaker questions not a woman’s right to her own body, but rather why we live in a cultural system that necessitates a woman act in claim of her body at all. Women must use language of ownership and consent only because women’s bodies are contested spaces: “I / was unaware, at the time, that it was / even my property.” It is through the desire of others to claim the body as property that we are made aware that the body is property to defend.

Part of the conversation about ownership of a body is the need to identify the extent to which the body is self. In “Although,” the speaker considers a lobster’s refusal to “feed off of / itself.” The lobster’s ability to regenerate highlights the relationship of body to self—how much of it might be sacrificed without alteration of the fundamental? But the speaker’s contemplation dwells not on the act of cannibalism or auto-consumption, but on the lobster’s refusal to use its own body toward the end of “self-sufficiency.” At all times, Schiff’s poems resist certainty, and this one is no exception. She does not moralize the sacrificed body parts. Instead, reminiscent of the first’s poem’s declaration “who am I to judge?”, she complicates the subject by turning to the speaker’s hunger. This hunger compels the poem onward. A delicate slice of ham becomes “like a pendulum of a clock.” Then, the simile is pulled from the reader in yet another movement that denies the reader the comfort of metaphor. Never content to leave her readers with the comfort of solid ground, Schiff necessitates the reader inhabit the uncertainty of her poem’s speaker. The only constants in the poem are appetite and time, and they provide neither a moral grounding nor illuminate the limits of the self.

Although Schiff’s poems make great twists in their associations, the impulse of the collection remains purposeful. Schiff’s speaker resists this tendency toward the proliferation of thought that seems to fuel her poems. In “Gardening,” the speaker lifts a brick in the garden and ideas crawl from it in entropic thought: “simultaneity / sickens me,” the speaker then states, both repulsed and transfixed by the consumption of a snail. Schiff’s speaker gestures toward the possible vantages to the field, where the hunted spirals into the hunter or a creature fulfills both roles simultaneously. We are reminded that every body is susceptible to takeover, and the textual body is no exception. The objection to “simultaneity” emerges again in the poem “Lion Felling a Bull,” in which the speaker claims:

The collection’s movement takes after one of Schiff’s winding shells. It feels like a centrifuge attempting to categorize the fragments of a working mind. Yet the propulsion toward fragmentation is not a desire, but a consequence, perhaps even a consequence of the choice of “self-sufficiency” not taken by the lobster. One consumes parts of oneself, fragments the self, in order to go on. To be whole would, of course, be less complex—it would be simpler to clearly see the lines between what we know we own and what others own of us. The speaker’s admiration of what has survived the fall and remained whole in this way makes sense. But despite this desire, A Woman of Property resists a sense of wholeness at every turn. Schiff allows no image to rest and no idea to remain isolated. Instead, she immerses her reader in a scattering of pieces and hides her truths in the fact of their never settling. 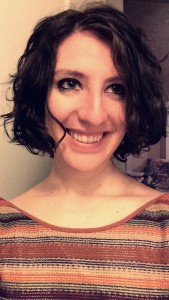 Madeleine Wattenberg studies poetry in the MFA program at George Mason University. She also holds an MA in English from the University of Cincinnati. Her work has appeared or is forthcoming in Devil’s Lake, Minola Review, Ninth Letter, Guernica, and Cactus Heart. She serves as assistant blog editor for So to Speak: a feminist journal of language and art.