WILD, BUT NOT LOST: A Review by Sheila McMullin 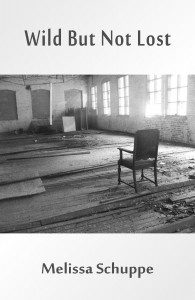 Melissa Schuppe’s debut chapbook Wild, But Not Lost (Finishing Line Press, 2013) finds itself in the good company of poets’ Sarah Vap, Rachel Zucker, and Arielle Greenberg: women writing motherhood and sharing women’s multifaceted experiences in the age of choice and women’s equality. Yet, as the many feminists reading So to Speak, we know choice not always has so many options and equality not so balanced. As a single woman, not yet a mother, but hoping to one day become, I am always appreciative of the poetic insights gleaned from poetry participating in adulthood theatrics and caring for aging folks and children. Schuppe’s collection acknowledges the all too familiar changing of relationships with parents and siblings, and struggles of keeping afloat in the dynamic landscape that is now our everyday lives.

Back-to-back poems “Note to Self” and “Nora” focus on beautifully complex relationships between mother and daughter, woman and elder. These pieces trouble static binaries of how one is assumed to react to and treat children and elders. From “Note to Self” to the end of the collection hold my favorite poems in the chapbook. Here I found a quickening pace of our speaker’s reflection on very present moments, creating uncanny collisions of material and thought, as in the husband who can no longer wear his wedding ring, not from lack of devotion, but of a changing of body. In Schuppe’s bio she writes herself to be “a wife and mother whose words reflect the exploration of her life’s event,” so I imagine Schuppe in “Note to Self” working with the elder woman who is growing “impatient with death,” who would “like to get out of here tomorrow,” and Schuppe noticing the body worked by age. I imagine when our speaker touches the older woman it both reminds her of her own fragility, reminds me of my fragility, and how that is scary. But overwhelmingly, we are provided insight through our bodies about the changing of time and how to look toward the future without so much fear. On the flip side of that, “Nora” a nine-year-old hugging her mother barefoot in the kitchen reminds us that one day children become adults, and although young they still carry agency. In this moment, our speaker is “afraid for what’s to come” and I am grateful for that honesty. It lets me imagine one day, in my own kitchen with my own daughter in my own version of this poem I will be afraid to, afraid out of protective love, but like Schuppe will have found inner strength to believe it will be alright. And with close attention, maybe then, I would hear “the whistle,/ clarity emerging” too.

Check out Melissa Schuppe’s guest StS post On Being Silenced

Sheila McMullin is an after-school creative writing and college prep instructor, supportsVIDA–Women in Literary Arts as part of their Membership Team, and is a contributing poetry editor and the blog editor for ROAR Magazine. She holds her MFA in Poetry from George Mason Univeristy where she was the 2012-2013 Heritage Fellow and the poetry editor and blog/twitter manager for So to Speak. During her final year at GMU, Sheila interned at the Library of Congress in the Poetry and Literature Center helping to create easily accessible poetry resources for the public through the LOC database. In 2010, Sheila lived and traveled throughout China, teaching English to university students in the Shandong Province. Winner of the 2012 Mary Reinhart Poetry Prize and 2012 Virginia Downs Poetry Prize, her work can be found or is forthcoming in HER KIND: Women in Literary Arts, YEW: A Journal of Innovative Writing and Images by Women, The Catbird Seat Blog at the Poetry and Literature Center in the Library of Congress, 1913: A Journal of Forms, ROAR Magazine: A Journal of the Literary Arts, Big Lucks, Counterexample Poetics: Assemblage of Experimental Artistry and Gentle Strength Quarterly.