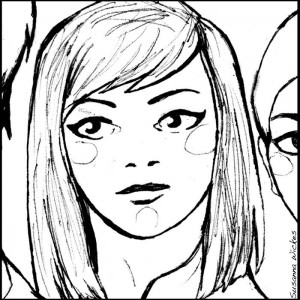 The women in my family tend to lose their minds completely before they die. I have heard stories of my paternal great-grandmother waiting until my grandmother (her son’s wife) washed her derrière before she pushed bowel movements out into my grandmother’s horrified hands, stories of a maternal great-grandmother who wandered out of her assisted living facility and curled up between two cars in the parking lot to go to sleep, only to freeze to death. My mom’s mom now carries on full conversations with her stuffed animals, and only sometimes remembers our names. She tends to call me Patty, since my laugh is so similar to her youngest daughter, my aunt.

When her children were young, my grandma worked at the Green Giant canning factory, but after slicing off part of her finger with a knife that was supposed to cut off rotten parts of potatoes, she sought a change in careers. She and my grandfather knew the manager of the local grocery store, so she took my mom with her and the two of them made the rounds of the aisles several times over, adding more and more groceries to the cart, before she finally worked up the courage to ask him for an application. When they returned home with over twenty dollars in groceries, my grandpa hit the roof, but she got the job.

My grandparents were married seven months before my uncle was born, and stayed married until their three kids were grown. Then, they divorced and both of them remarried; my grandpa did so many times. My grandma’s second marriage ended after Frank ate a big piece of pie, laid down in bed, and (according to my mom) experienced an explosion of his heart. My grandpa’s marriages ended because, well, he wasn’t great at being married. Even so, in 1992, they exchanged vows again, my cousin and my brother, with ties and mullets, lighting candles before the ceremony.

When I was nine, two years before my grandpa died of leukemia, I went to spend Spring Break with my newly-remarried grandparents in the small house they had moved to in Boise, Idaho. Grandpa and I sat down at their round, wooden table, which was placed directly in front of a large, square mirror that hung on the wall. Grandma brought us our dinner plates and milled around for a few minutes before sitting down herself, so we’d had plenty of time to take a few bites. “Well,” she smiled at us, “how is it?” Before I could respond, my grandpa growled, “You sure dried it out,” and then winked at me. Grandma slammed down the salt shaker in her hand and stood abruptly while yelling, “Well, for hell’s sake!” She ate someplace else, and Grandpa chuckled while my cheeks blazed and I watched myself chew in the mirror.

Last week, twenty-one years since the dry dinner, my mom, my aunt, and I visited my grandma in her assisted living facility. Each of us had a photo album in our hands, and Grandma mostly sat breathing her pumped-in oxygen and telling us not to mix up her piles of photos, which were sorted in some mysterious fashion that only made sense to her. We laughed at old hairstyles and remembered former spouses of second cousins. Then, out of nowhere, Grandma said, matter-of-factly, “Family life didn’t suit Bill. I see photos of him after the divorce and he smiles like he never did with us. He was truly happier on his own; that’s just who he was.”

I sat very still and watched my grandma as she said this, while my mom and aunt continued to flip through the albums making comments. We younger women had been operating under the assumption that my grandma is somehow weaker than us, that her knowledge of what is and isn’t is fading or faded, and yet she was able to assert with calm acceptance that it was never any kind of failure on her part as a woman that caused my grandpa to be how he was. “Look at him,” she said, holding up a photo of her husband (twice) grinning at the camera in between marriages. Then she looked up at us and, with her newly scratchy voice from all the oxygen tubes, murmured, “We girls turned out pretty good.”

Moments later, Grandma told me she’d bought the large stuffed rabbit that sat next to me on the couch because he “kept an eye on her things” and would “tell her if they stopped being nice.” She might not be entirely grounded in reality, but I guarantee each of the three women before her — her daughters, her granddaughter — have not yet been able to fully attain the clarity of mind she has earned in matters of relational responsibility, of our own roles as independent women regardless of who we are connected to and what kind of life serves them best. “Well,” I thought, “for hell’s sake.” I shook my head as I realized all the things my grandma did know about being a successful woman in this world, about how little credit we’d been giving her as she babbled to stuffed dogs with bows in their hair.

Brandi Dawn Henderson is a traveling writer, on regular journeys that prove truths to be no strangers to fictions. She serves as Editor in Chief of Outside In Literary & Travel Magazine and co-edits Prompt & Circumstance.  Some of her favorite things include puns, peaches, and freckles in the shapes of things. She wrote a relatively successful expat column and an utterly unsuccessful advice column for a year in New Delhi, and has had work published in Mason’s Road Literary Journal, JMWW, Three-Quarter Review, 20 Something Magazine, Lost Literary Magazine, Time Out Delhi, Urbanite Magazine, Dillinet Magazine, and First City Magazine. She currently obsesses about her two forthcoming anthologies, puts bow ties on her dogs, and blogs at brandidawnhenderson.com.