Jessica Kallista is an artist, poet, and curator living in Northern Virginia.  In 2014, she founded  Olly Olly, an alternative art space in Fairfax, VA dedicated to bringing together local artists. Kallista speaks with us in this interview about the gallery, its mission, and her own work.

Holly Mason: When and why did you found Olly Olly, and what has been your experience as the gallery owner?

Jessica Kallista: Although Olly Olly officially opened with our first exhibition, Bodylore, in January 2015, I’d been renting a subset of the space as my studio since May 2014, and then I transitioned into utilizing the entire space to create Olly Olly as a collaborative space in November 2014. But as is often the case, while the beginning of Olly Olly seems like a finite moment, it emerged from and was a part of a lot of thinking, and of my need to convert the frustrations I’d been feeling while living as an artist and writer in suburbia—which we somewhat jokingly refer to as Deep Suburbia—into something that would make Fairfax more like the best creative communities I’ve experienced, with intelligent, daring, curious people thinking, talking, sharing, collaborating, and creating their way through life.

My experience has been overwhelmingly positive, which isn’t to say there haven’t been challenges. Owning any small business is an intensive, on-the-fly DIY endeavor, and creating an alternative art space in old town Fairfax has definitely required a lot of work. But the artists who have come together not only to share their amazing work but to help create a community have been amazing, and it has been humbling to hear from so many people who say they’ve been wanting a space like this in suburbia for a long time. 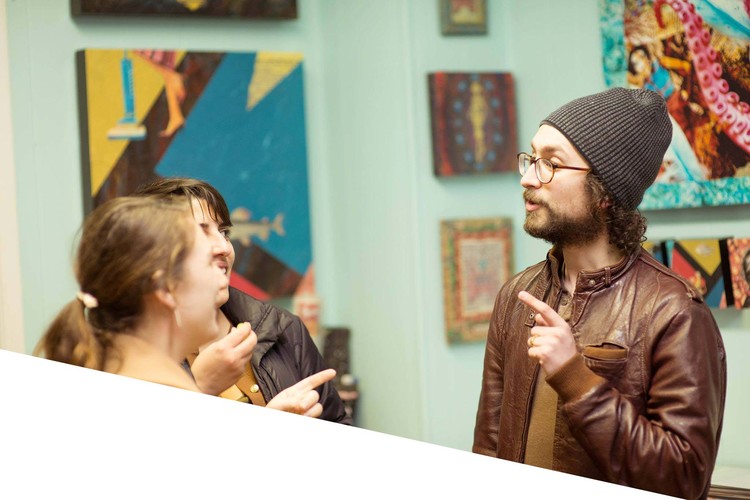 HM: What do you think makes Olly Olly a unique gallery/art space?

JK: If the community I needed so badly had already existed in Fairfax, I would have joined it, and never would have thought to found Olly Olly. As you might know, we named Olly Olly after the phrase olly olly oxen free, a call made at the end of a game like hide and seek to call everyone in after the game has ended in order to begin the game again. That name really captured what I was seeking: both the childlike innocence of it—all of the risk-taking and chance play that comes with that innocence—and the idea that there are artists all across the suburbs of Northern Virginia (forced into virtual hiding by suburban challenges) who need to come out of isolation in order to build the creative conversations and collaborative community artists need to thrive.

In terms of what separates Olly Olly from many other spaces, it’s incredibly important that we represent accurately the diversity of artists in the area. And it isn’t as though doing so is difficult in any way. While not every artist is required to be socially conscious, social consciousness is an important aspect of what we do. While not every show will be for or about women or “women’s issues” or for or about diversity and diverse expression, Olly Olly shows are more likely than most in Northern Virginia to include art that represents varied perspectives, a wide variety of cultures, a wide variety of mediums, and a multiplicity of backgrounds and experiences. We think that this diversity results in better shows, in better conversations, and ultimately in the creation of a better art scene and a better community. We’re just as unlikely to have a show comprised entirely of paintings as we are unlikely to have a show in which a single cultural perspective is represented.

We also know that experimentation and exploration are at the core of every thriving arts community, and want Olly Olly to be a call for local artists to come out from their hiding places to make and show their art in a nurturing, creative, alternative art space. We also want to call the community to come out, support, and benefit from an art scene that helps our community prosper and helps to provide an authentic, art filled environment.  We’re working every day to promote collaboration rather than competition and to provide studios, an incubator space, and art gym for local artists, as well as a gallery, open studio, and event space for the community. 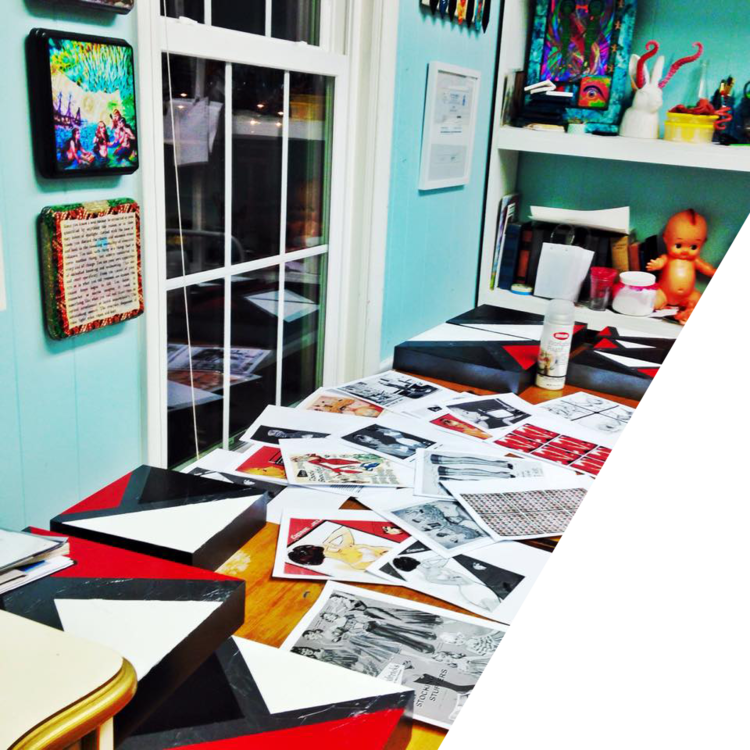 HM: How do you decide what art to exhibit?

JK: There are shows I curate, shows that I co-curate, and shows for which we enable others to curate, but all Olly Olly shows have to make me a believer before we would be willing to host them. Olly Olly is a completely DIY space and we’re dedicated to being open to collaboration. I’m grateful to have the space to collaborate with other artists and curators who are ready to experiment, take chances, and delve deeply into questions regarding art and social practice.

HM: What is currently on display there?

JK: I’m excited that this summer we’re collaborating with local artist/curators to fill Olly Olly with constant creative energy and vibrant thoughtful exhibitions. Making Space, co-curated by Anne Smith is currently on view through August 20. On August 27 from 7-10pm we’ll hold an opening reception for Lush Life, co-curated by Yue Li. Our subsequent show, Flesh, is still in the planning stages, but is scheduled to open on October 1.

HM: Can you talk to us about your own work as an artist? What medium(s) do you tend to work with? What is your art interested in? I know you are also a writer (a poet, right?). I am wondering if you see your writing influencing your visual art or vice versa?

JK: For about 20 years I’ve been combining my writing and visual art in performance, paintings, photography, collages, and more recently video pieces that employ elements of chance, repetition, and appropriation. My work is often concerned with the everyday, calling to mind the familiar artifacts and ephemera of the mundane and reimagining and transforming them into fantastical dreamlike elements of magical worlds that are just below, above, or somehow beyond our reach. I’m continuously building an ongoing narrative exploring the concept of being a stranger in a strange land. I put myself or a persona or avatar of myself into a variety of situations and environments in order to play with or question a variety of assumptions about embodiment, decolonization, race, sexuality, gender, identity, space, and place. Being out of place, out of body, and/or other bodied allows for investigation of and experimentation with known and unknown environments as well as ways of inhabiting bodies, fluid identities, space, and place. Communicating the lost, almost shipwrecked, displacement in an unlivable, non-sustaining, and unsustainable world while still maintaining the ability to access and reveal a liberating and vibrant sense of magic is a constant and continuing goal of my work.

HM: Finally, what book, art, and/or artist recommendations do you have for our readers?

JK: I’ve been obsessed lately with artists Carol Rama and Wangechi Mutu, and I keep reading and re-reading Claudia Rankine’s Citizen: An American Lyric. My best recommendation though is to get connected with the writers, artists, musicians, and creative thinkers in your neighborhood and work with everything you have to build those connections and constantly make them stronger. Work together with these creatives to make the world you live in—locally and globally—the best possible world for everyone. We’ve been blessed and lucky to meet so many artists and thinkers at our events, including at Art Gym, where we spend a night each week making, thinking, sharing and collaborating in a way that invigorates and renews us. 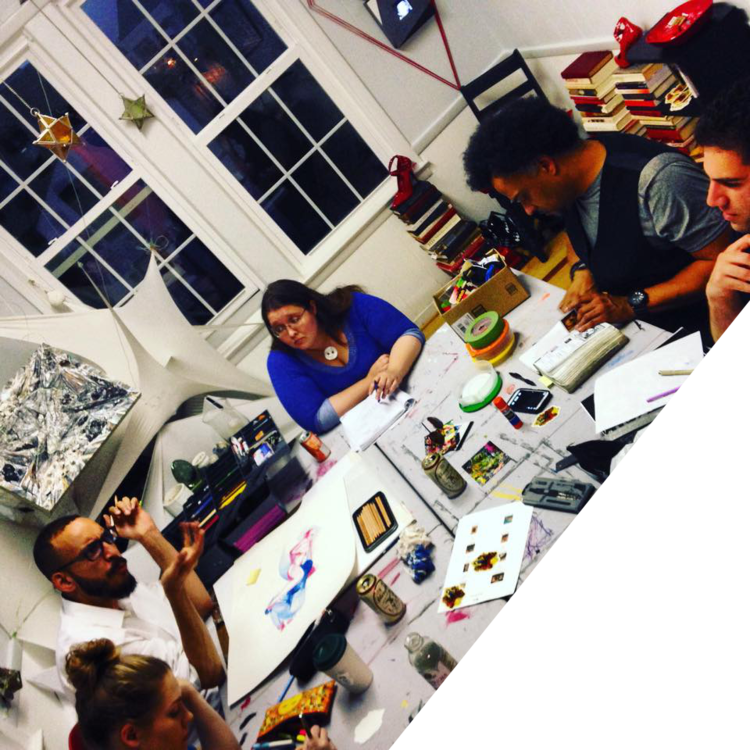 Thank you, Jessica, you powerhouse! 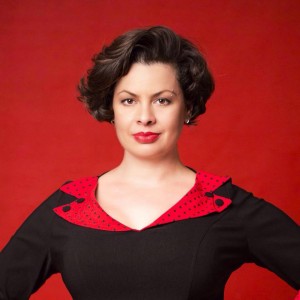 Jessica Kallista is an artist, poet, and curator living in Northern Virginia. She received her MFA in Creative Writing with a concentration in poetry from George Mason University in 2002. Her poems have appeared in Phoebe, Sou’wester, and So to Speak. On her 42nd birthday she met her biological father for the very first time. He encouraged Jessica to show her art and poetry in exhibitions and to start a blog about art, mindfulness, and life in suburbia. That blog came to be called Dear Suburbia. Her work has since been included in exhibitions at George Mason University, The Adam Lister Gallery, Epicure Café, Gallery Underground, Target Gallery, The Fridge, Tempus Projects, The Bricks of Ybor, and Olly Olly. She enthusiastically participates in the worldwide phenomenon that is Free Art Friday and has placed over 700 pieces of free art in the suburban wilds of Northern Virginia for any random person to find and keep since August 2013. She curated art exhibitions at Epicure Cafe from January 2014-December 2015. In 2014 she founded Olly Olly, an alternative art space in Fairfax, Virginia, in order to create space for local art and artists with a focus on experimental, conceptual, and performance art. You can learn more about Jessica at jessicakallista.com and more about Olly Olly at ollyollyart.com.