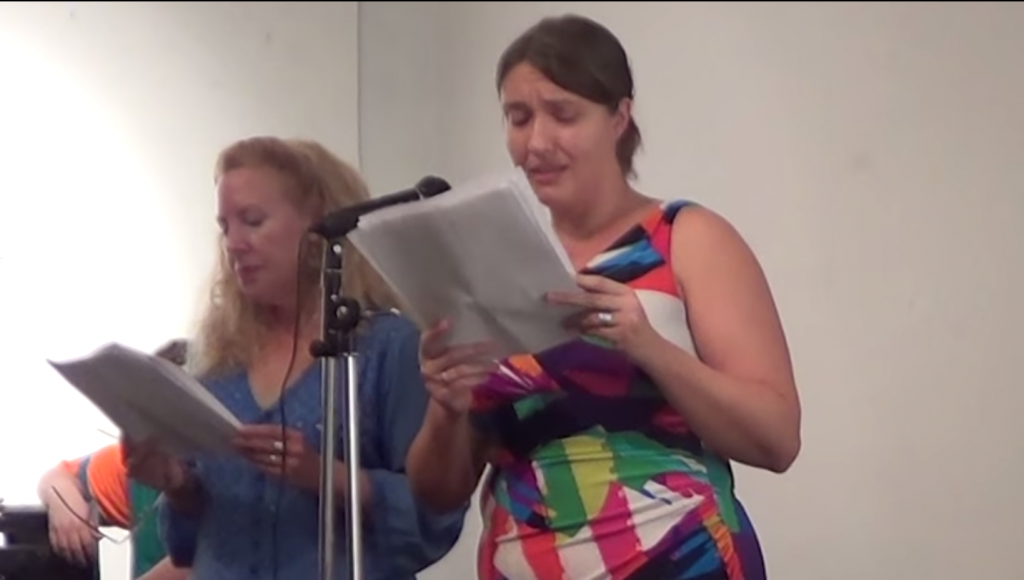 Denise and Julie’s collaborative essay “10 Ways to Get Her” graces the pages of our 2015 Online Summer Issue. In this interview, they talk collaboration, feminism, and reading recommendations!

In addition to their work in So to Speak, Denise Duhamel and Julie Marie Wade have published collaborative essays in Arts & Letters, Bellingham Review, Cincinnati Review, Connotation Press, Green Mountains Review, Nimrod, No Tokens, Passages North, poemmemoirstory, Quarter After Eight, The St. Ann’s Review, and StoryQuarterly. Both writers teach in the creative writing program at Florida International University in Miami.

Holly Mason: How does your collaborative writing process work? Can you give us a “behind-the-scenes” glimpse?

Denise Duhamel: We usually start with a concept—Julie is really good at this, conceiving a “big idea.” Then, we work in alternating chunks or pieces, sometimes with the parameters of a word count. “10 Ways to Get Her” is from a series we are doing of numbered sequences. Does that sound about right, Julie?

Julie Marie Wade: Yes! We often discover patterns within one essay that lead us to others and give rise to a series. So, for instance, I had been thinking about Baskin-Robbins and noticing that I never see that ice cream shop around anymore. The slogan “31 Flavors” made me think of “31 Favors,” and so Denise and I ended up writing an essay exploring different kinds of favors people ask of others in general and have asked of us in particular. That  essay was published by Tupelo Quarterly earlier this year. We wrote an essay on different ways the word “party” appears in our culture called “42 Ways to Throw a Party,” which is forthcoming from Passages North. We did a play on the Twelve Apostles with an essay called “12 Apostates,” and another essay that responded to a call for submissions about the weather from Creative Nonfiction called “16 Forecasts.” We seem to use these guiding concepts as well as each other’s entries as inkblots and then generate associatively within the constraints we have set for ourselves.

HM: You are both also such accomplished poets. Have you ever collaborated on poetry? If so, is it a different process collaborating on poetry vs. prose?

DD: Our first collaboration was a prose poem written sentence by sentence. I have also collaborated with other poets, most notably Maureen Seaton. So I bring along the collaboration element and Julie brings the prose, of course, with her poet’s sensibility.

JMW: I never imagined I could collaborate with anyone until I met Denise, but I was and remain a huge fan of the collaborations of Denise and Maureen, which I read for many years before I knew these poets in person.

HM: In general, outside of collaboration, what do you find to be different within the process of writing poetry vs. prose?

DD: I feel much more natural in the land of poetry. Before Julie and I started collaborating, I’d never tried such braided creative nonfiction, which feels to me much more akin to poetry. I have three failed novels, so it’s not that I didn’t want to write prose. I’m just not a great linear storyteller.

JMW: For years, I’ve said I was a “poet first,” that everything begins for me in poetry. What I think I meant by this identification is not that I always write poetry, per se, but that I tend to lead with sound and image no matter what I’m writing. Put another way, my attachment to the aural qualities of language supersedes my attachment to traditional notions of plot. More recently, I’ve begun to wonder if I might actually be a “memoirist first,” given that my primary impulse as a writer seems to be the investigation and articulation of memory, whether in poetry or prose. Self-referential, exploratory writing is where I feel most at home—leading with sound and image, of course—regardless of where the line breaks, or if it breaks at all.

HM: “10 Ways to Get Her” is a really compelling and beautiful essay with a strong voice and tone. A simultaneously cheeky and sincere manual on how to gain “her” affections. Could you tell us more about the word choices of “she/her” and “get” repeated throughout?

DD: As a kid first starting to read, I really did see the word “together” as “to get her.” Julie and I were talking one day about those early reading experiences and decided to use this as an idea for an essay.

JMW: Until Denise mentioned seeing “together” as “to get her,” I don’t think I had ever noticed the phenomenon before. Now I can’t look at the word “together” and not see it parsed into the three smaller words. Denise gave us this concept, and then she suggested we might try a ten-point list because so many advice columns use the “ten ways” model. I liked the subversive element of playing with “ten ways to get her,” since so often the magazines I see at the grocery store seem to be touting “ten ways to get him” or other versions of pleasing a man, guests at a dinner party, a cultural beauty standard, etc.

This essay was a chance for us, individually and collectively, to speak back to some of those expectations and mandates placed on women.

HM: I love the specific details in the essay—things like “shrimp and grits” and “Demi Moore in Ghost.” There’s such specificity throughout, so I wonder, did you have a specific “she” in mind or a few “shes” or a broader “she” in mind?

DD: The various “she” personas who appear are basically Julie and me, right? Wouldn’t you say so, Julie?

JMW: Definitely. I remember you, Denise, saying something in an interview once about how you and Maureen (Seaton) achieve a “third voice” when you write collaborative poems. But in our prose collaborations, I don’t think we find a third voice so much as we incorporate two voices, each one strongly autobiographical/self-referential, which seem to harmonize quite naturally. As Denise identified, she was born at the beginning of Generation X (1961), and I was born at the end of it (1979). We serve as brackets for one particular American generation, and many aspects of our life-experience, personality, and worldview overlap in ways that continue to surprise even us. We seem to draw strength and creativity from our differences, too.

HM: How do you see feminism and gender working as topics in your writing more broadly? Is it something you decided to consciously focus on or has the subject developed more organically?

DD: The political is personal and the personal is political, so I feel as though Julie and I approach feminism and gender as part of our day-to-day living.

Julie was born the year I graduated from high school, so we are from two different “waves” perhaps, but we love to talk and write all things feminist. Julie’s writing sparks my own, and “together” we take on topics I might not have come to in my solo work.

JMW: To echo “the personal is political” theme, I think these essay collaborations have emerged as our own literary consciousness-raising club! I began reading Denise’s solo work and collaborations in poetry during the early years of the new millennium as a graduate student. By 2006, I was teaching her book Kinky (Orchises Press, 1997) in my women’s & gender studies classes. I recognized Denise as “my kind of feminist,” a poet who critically examined gender inequality, sexual stereotypes (and racial and class-based stereotypes, too!), homophobia, visibility politics, and many other concepts from feminist theory in light of popular culture and current events. Denise’s poems made feminist theory real and relevant to me and helped make it so to my students. The praxis that feminist theorists kept talking about was embodied in her poetry, but it wasn’t presented in a dour or overly cerebral/academic way. Denise made me laugh as much as she made me think, and I just had a feeling that if I ever met her in real life, we’d be friends. It turns out—I was right!

HM: Recommendations! Are there any writers and/or pieces of writing that you would recommend to our readers? What should we be reading?

JMW: Yes to all those above! I’d like to add a few other recent titles, including Stephen S. Mills’ A History of the Unmarried, Dawn Lundy Martin’s Life in a Box is a Pretty Life, Daisy Hernandez’s A Cup of Water under My Bed: A Memoir, and Denise Duhamel & Maureen Seaton’s Caprice: Collected, Uncollected, and New Collaborations. 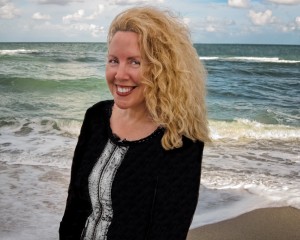 Denise Duhamel’s most recent book of poetry Blowout (University of Pittsburgh Press, 2013) was a finalist for the National Book Critics Circle Award. Her other titles include Ka-Ching! (Pittsburgh, 2009), Two and Two (Pittsburgh, 2005), Queen for a Day: Selected and New Poems (Pittsburgh, 2001), The Star-Spangled Banner (winner of the Crab Orchard Award, SIU Press, 1999) and Kinky (Orchises Press, 1997). Sibling Rivalry Press published her collaborations with Maureen Seaton CAPRICE (Collaborations: Collected, Uncollected, and New) in the fall of 2015. She is the recipient of fellowships from the Guggenheim Foundation and the National Endowment for the Arts. 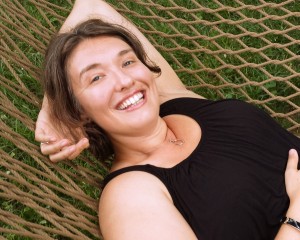 Julie Marie Wade is the author of four collections of poetry and four collections of prose, including the forthcoming Catechism: A Love Story (Noctuary Press, 2016) and SIX: Poems (Red Hen Press, 2016), selected by C.D. Wright as the winner of the AROHO/ To the Lighthouse Poetry Prize. Her first book of prose, Wishbone: A Memoir in Fractures, won the 2009 Colgate University Press Nonfiction Book Award, and her first poetry collection won the 2010 Marie Alexander Poetry Series of White Pine Press. Wade has also received an Al Smith Individual Artist Fellowship, a grant from the Barbara Deming Memorial Fund, and the Lambda Literary Award for Lesbian Memoir.

Photo Credit: The featured image is from Denise and Julie’s reading of  their piece “The Gaze” with Orange Island Art Foundation.

Special thanks to our Nonfiction Editor, Christa Spillson,  for collaborating with me on this interview!