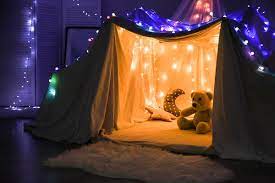 I built a fort today. It was the first time in a while since I had done that, it felt good to trample over chairs and blankets. It felt good to feel like not a single person or thing could get through my fort. The invincibility of another roof and pillows. It felt safe. Today I feel wherever I go there is this scent of rebel, danger, and riskiness even when I do as little as breathe.

In my fort, I can laugh, whisper, yell cry, and a sigh of joy. Certain security I’ve never or maybe just haven’t felt in a long time. SHHH! My sister yells as we both stare at the perimeter of our blankets, draped and touching the floor. We know our father cannot cross, his stride is a shadow on our carpeted walls and duck down, still confident that the broom holding the center won’t fall over. We thought that a single metal rod could carry an entire load of a roof. Back then it didn’t feel like a risk, putting our faith in the “jahroo” that had been used to clean the countless messes on the very floor we sat. Why now do I feel like I’m jumping out of a plane? Why isn’t the world like my fort? I asked my dad and his face positioned itself as mine does now.

The extra boundary that deceived me many years ago, deceives my little sister. She rolls up into a ball and tucks her stuffed animals as my parents did her years ago. When did a boundary mean so much? Do we really think that this blanket stops anything? The boundary of a house, of a city, and of course a country. Why do we believe that once we step out of it we are not subject to the same humanity, that the extent of our thoughts only fluidly moves about in our space? I think about this as I sit legs crossed between four dining chairs.

For me, it didn’t matter where I was, I built the same fort in my house in Pakistan and the same fort in my house in the U.S. Yes, I built one with my mom’s ‘dupatta’, and the other with a quilted blue blanket but both were my “ghars.” home I had the tendency to add plurals or English endings to Urdu words, it was my way of connecting my boundaries, connecting my culture to my space. Sometimes I’ll speak in Urdu and add an English word, other times I combine the two, jahroo a word in Urdu that means broom, and when asked I say I’m jahrooing, adding the verb ending ing that I learned when I came to the United States. It’s not because I am not familiar with grammar in the languages but because I can find patterns in one that I want to use in the other. Earlier this year I started taking French, I thought it would be like Spanish, a language I learned parallel to English at the age of five. When I speak french I feel like I’m speaking Spanish but jumping over letters, at times I’ll invent cognates by saying a word in Spanish and pronouncing it like a French person.

My whole life I have known language as different things, when I was a baby, it was a door something I could step through to understand the familiar noises of my parents. As a toddler, it was a bridge, a pathway to connect me to my surroundings, a way to understand the foreign place that was now my home. I didn’t realize I’d soon learn not only English but my neighbor’s language, Spanish. As I jumped across this bridge between El Paso, Texas, and Jaurez, Chihuahua a bridge that of course connected a border I learned I had my own boundary to jump across. I did not know the dialects of my mother tongue, a language my parents conversed in so freely in. I could understand, but I could not speak the words of Punjabi, that was when language became a boundary, a boundary between me and Punjab, I place I long to see. Today language is a pair of twins, as I associate the Spanish Langauge to French and Urdu to Arabic that I recite every day in my prayers.

So I go back to my original question, when did boundaries mean so much? It’s only fair that I answer this question myself. Boundaries are what makes us diverse, but they are also what divides us. The first boundaries can arguably be those that came after the divide of Pangea, then these borders that we’ve built allow us to experience different perspectives and understand new cultures but they also push us to focus on our own boundaries and separate us from issues as global citizens. For me, boundaries became a bridge to understand myself and my culture better.  Still, I sit in my fort, which has its own boundaries and shares the experiences from my bridges abroad. Intangible as it may be, language is just like my fort, something I can set up anywhere I am and still feel at home.

Author’s Note This piece reflects on the art of fort building, something that is common in many cultures but it represents different things. Growing up as a Pakistani Immigrant in El Paso, Texas I reflect on the diversity on the border and my multi-cultural experience in the form of languages. Something that has been both a bridge and a boundary in my short-lived life.  I question the tangibility of such borders and what they mean to us as humans.

Aina Marzia is a 16-year-old emerging writer and poet from El Paso, Texas. As an immigrant, many of her works describe experiences of not fitting in and her perspective of the unique world that surrounds her. Aina’s creative writing and poetry work has been seen in Havik Journal 2021, BElatina News, Brave Books, The Austin Chronicle, The City Magazine, celebrating art, Scholastic Art & Writing programs, and National History Day Paper theses. This past year she became the National Do The Write Thing Ambassador representing her hometown after writing about youth violence, especially how it affects POC. The piece was published in the Library of Congress. Aina was also Awarded the Jericho Brown Scholarship for BIPOC Writers and had the opportunity to work with Nathan Mcclain. As a writer who enjoys journalism, poetry, creative writing, and academic works she enjoys the full spectrum of the expression world.