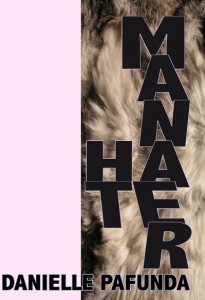 A Mommy V, Illness, Ex-Dog/Ex-Lover triptych, Danielle Pafunda’s Manhater is more of the consumptive tense man (h)eater. A Plath-descendant, Pafunda’s speakers’ polemic attitudes build a cage around opponents’ gazes. Immediately, with a title like Manhater we assume the opponent is men, but the reality is much larger, and far more complicated, than man—the reality is a patriarchical system that betrays women and those with female identities. It’s a hyper-allergic society to female bodies and pain. It is the female body pregnant with child, or feeling, conflated with the ultimate consumption metaphor of our capitalist economics, love affairs, and medical system. The speakers of Manhater are unrelenting and factual about the scenery swallowing them or the transformations of their bodies and what they want out of it all. Manhater should be read by people who are scarred of vaginas and think the word moist is gross. Not that moist is ever used in the book, but on the principle that what’s freaky about moist is its relation to the vagina, and the context of wetness from pleasure or menstrual cycle. One of the strengths of Pafunda’s writing is her constant attention to simultaneous meanings. Enacting the pun or the phrasal to her advantages, she allows meaning to fulfill the sentence and take up as much brain space as possible. Like all poetry collections, Pafunda’s Manhater is about re-appropriating language, and in this collection, the type of language most Americans don’t even want to think about.

With a title like Manhater and the sardonic tone of the poetry, I imagine it would be easy for the general hater to use that oh, so common and reductive phrase, “see, all feminists just hate men.” Per usual, these anti-feminist comments take language and suggestion out of context and ignore the intrinsic subtleties of clichés. Within Manhater we get the slight sonic echo of mad hatter, with the implication of factory produced sickness, or more generally, the alternative world at the bottom of the rabbit hole. We also have the active present tense, situating us immediately in the constant happenings-now. We know this book deals with gender, placing “man” 1st and center. So the questions are, how will this book deal with gender? And who is actually doing the hating? And with hate, will we be given the opposite love?

Section one is the trails of Mommy V. Mommy V, one out of 5. Mommy V, clone. Mommy versus. Mommy Dearest. A woman hungry and bored when she’s full, Mommy V is always on the prowl and making consumptive judgments on her opponents. In a praying mantis fashion we see Mommy V eat her lovers and toss around her sperm donor. Here, we get quick glances at “Her brood, the hotlings,” (22)— her children— but Mommy’s happenings don’t seem to focus much on the children. Then we are to ask, who is telling us the story of Mommy? Who is following in her trail? The Mommy name she was given is more of a descriptor of functions she performs in relation to having children—giving birth at times, being donated sperm, seeking partners if only to eat them later.

Question the title of Mommy.

Similarly, in section three we question the reality of our bodies and deal with the maggot infested scars on ourselves and ex-lovers. A playful callback to the title, an ex-lover does not automatically create a hater. The I speaker catalogues every ex-lover and refers to the ex-lovers en masse. Even though these are ex-lovers, they still seem to have their hands all over the speaker, and often “encourage our frisking.” This stripping away of individual identity and creating commodity out of ex-lovers, makes a playful thing of our speaker. The I often lies to the ex-lovers, but then gives in to the joke, uses many exclamations (“It’s a sarcophagus party!/wherein we wear another’s likeness.”), and does not seem too perturbed when “ex-lovers are in the room!” Of course, though, we rethink the party-like atmosphere when an ex-lover has “opened a worm-filled ulcer.”

Section two leads in the picaresque style, framing our speaker’s illness on plates. Like the dinner plate, the x-ray plate, a metal plate to set bones, the illness is mounted there. As if in a museum our speaker curates, we are guided to each plate suggesting a landscape as a way to divulge emotional matter.

In the poem that opens this section, “In This Plate My Illness Is Visible,” Pafunda writes:

I wear a bag of hammers….

What will you ask me to do,

my tunica intima thick with teeth

and my neck herky-jerky

with an ethanol samba?

We move from the metaphor to articulate the inarticulate, mixed with the professional, or what some call the scientific name, minced with the phrasal, directed at this ominous you—what will you ask me to do? You’re in control here, all I have is the language that tries to describe.

In Beauty is a Verb: The New Poetics of Disability anthology, Pafunda writes in her essay Meat Life, “The medical gaze, leering ever pointedly since the end of the nineteenth century (see Foucault), works two ways: 1) it reveals things about you that you yourself did not know, and 2) if it cannot see your illness, your symptoms don’t exist.” A part of the ever-growing feminist argument, we need to ask the question of how the medical gaze coincides with the male gaze and its affect on the body, and in particular, women’s bodies? 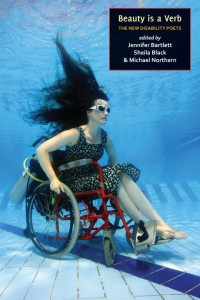 Pafunda begins to parse these answers in Meat Life distinguishing between the “able body” and the “disabled body” the “invisible” pain always placing emphasis on the looking.

Pafunda tells the story of how her doctors could not “find” what was wrong with her when she was younger and very sick. Frustrated, the young Danielle’s father took her blood results to their veterinarian to be tested, and finally she was given a diagnosis. Whether this vet is a better medicinal practitioner than the doctors in the hospital is not my right to judge, but it does seem like this vet having dealt with patients with the inability to speak our language was able to think more widely, perhaps abstractly, to find a diagnosis. That perhaps this vet could just believe the pain was real and move on from there, helped lead to the source of the problem.

Pafunda speaks of this event in her piece, “In This Plate I Receive My First Diagnosis.”

Now that she has a diagnosis she can say: “I have fibromyalgia, I say, and now the look I receive is sympathetic,” she writes in Meat Life. In this case, the latinate naming of the pain provides a real context for outsiders to sympathize, even though I am betting most have never heard of or could even repeat fibromyalgia. It gives pause to the idea of naming gives power. If you name it, you can have power of it. When this concept gives feminists so much strength so often, we also see its limits when we enter the medical realm. Pain is not taken seriously unless it can be quantified. We are reminded of our new religions: medicine and prescriptions. The mixing of capitalist theology that productivity means ignoring health concerns. And those “complaining” of health concerns are at-risk for becoming unproductive and a burden on the company’s financial profits—think, pregnancy leave and retirement benefits. Think the anger surrounding Obamacare.

What does it mean to be called a woman, or a mother, or a lover, a dog, dirty, or hurt? Manhater tells us.