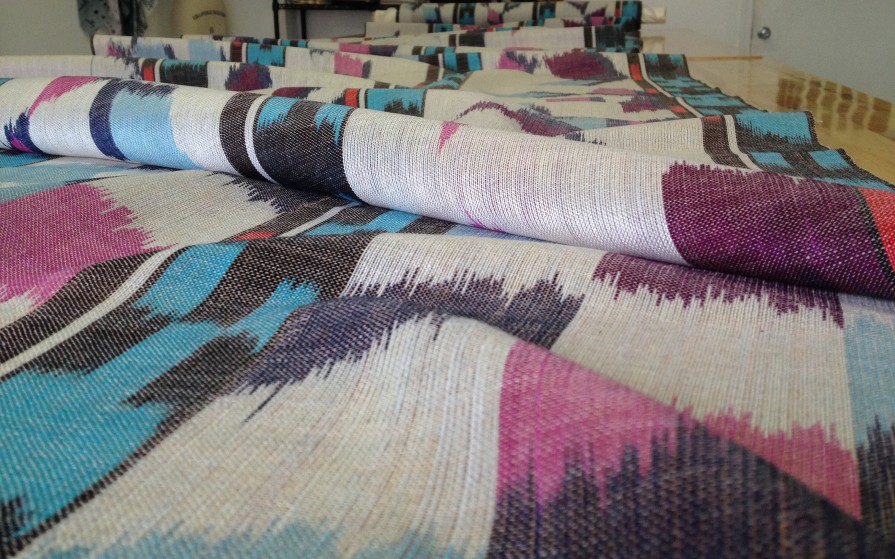 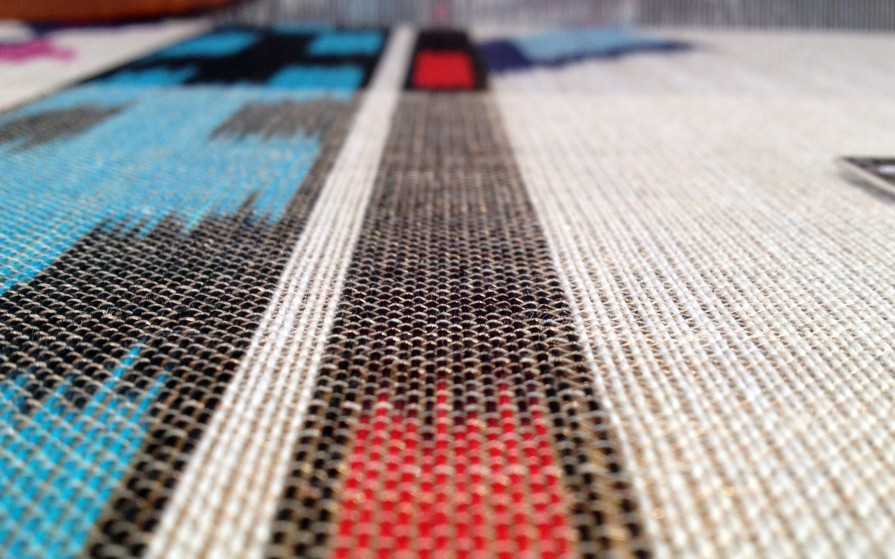 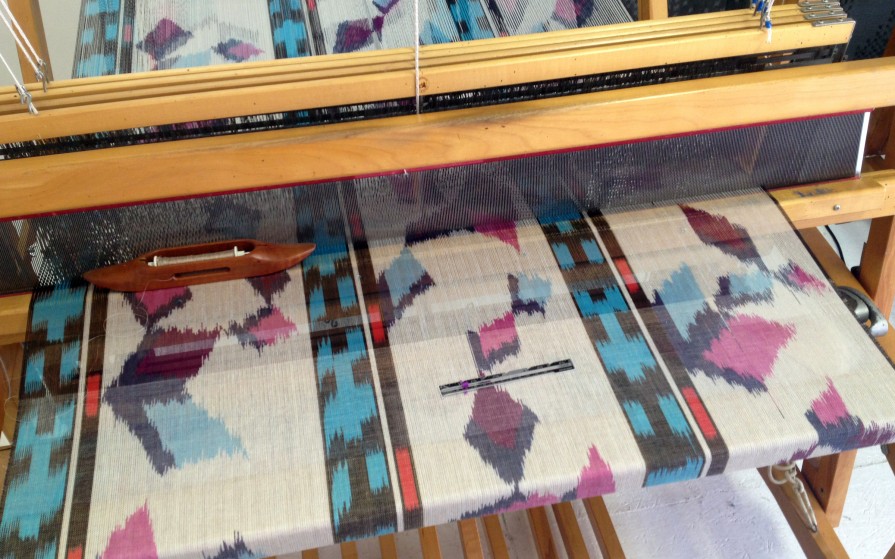 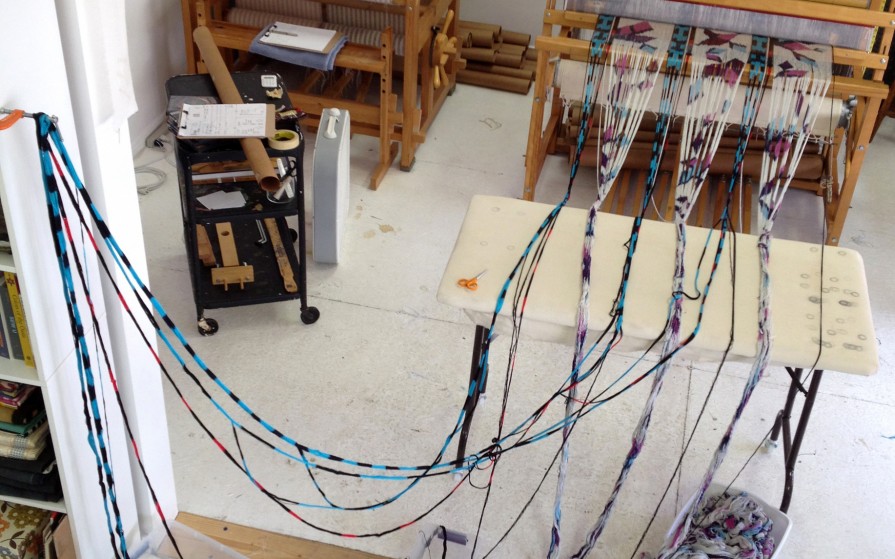 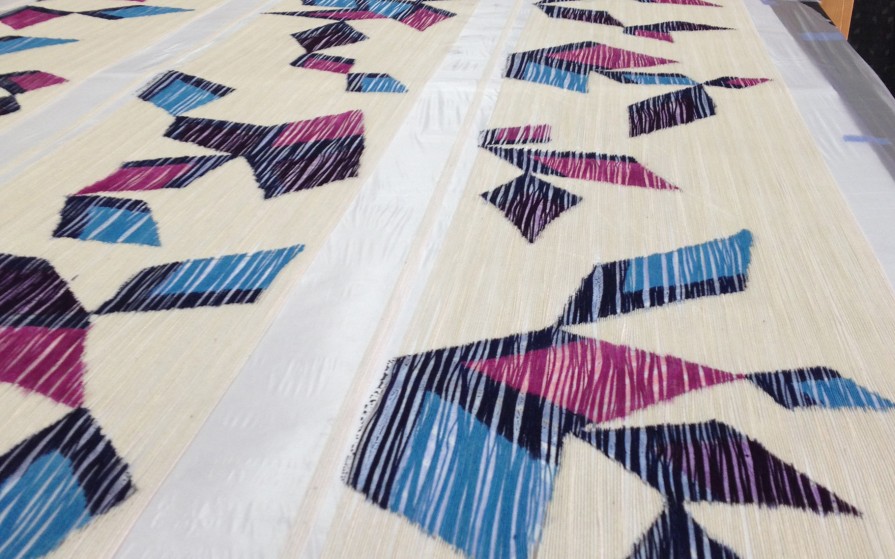 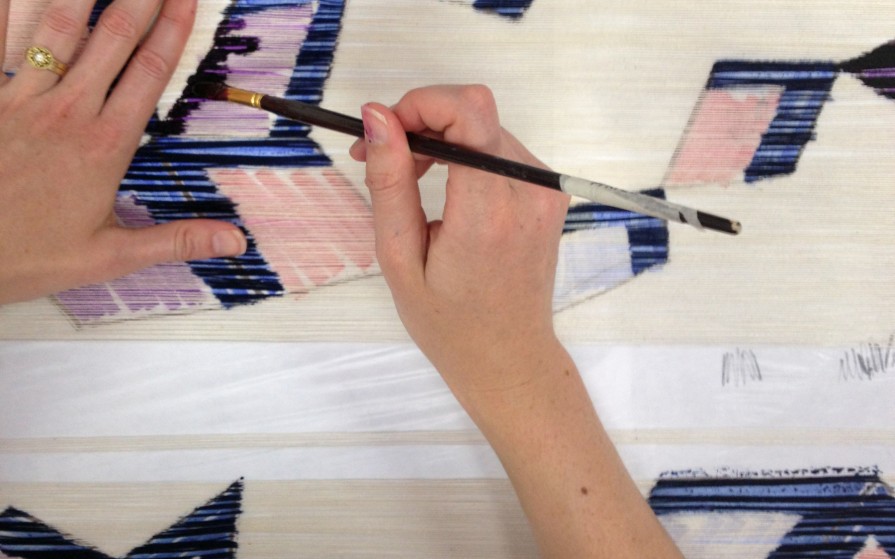 I use my loom and the process of weaving as a conceptual tool, finding metaphor in process and meaning in material. I began and then honed this exploration in the sheltered halls of an undergraduate and graduate art school education, and when I graduated I began weaving scarves as a way to support my “fine art” studio practice. Adding this functional work into the culture of my studio was incredibly challenging and surprisingly enriching, but it also caused an identity crisis. What does it mean if I make artwork and scarves on the same looms, using the same techniques? Why and how do arbitrary labels so concretely impact value in my work? Over the past five years since I left school, I continued working both functionally and conceptually, my studio practice growing increasingly sophisticated and complex, and I came to the point where I was equally invested in making both art and scarves, and recognized the importance of both. The unease I still felt came from outside my studio, not within it.

I decided to create a body of work that could speak to this unease, this complex identity, by further confounding the labels and values of the objects (artwork and scarves) that come out of my studio. I am now deep into this examination of my studio practice and the internal and external forces that shape my relationship to that practice. I have come to call it the Crown Jewel Project: its mandate is to reject categorization and labels, and instead to embrace with abandon the actions and compulsions that drive me to make all of my work. The resulting body of work merges art and scarf in a series of “conceptual scarves” so excessive and intensive, I can only think of them as the Crown Jewels of my little weaver’s kingdom. It also literally unites the two sides of my studio practice, and in doing so provides an opportunity to examine this act critically within my cultural frameworks.

Amy Pohler said, “It’s the doing that is the thing”. The heart of my studio practice is in the labor of my work. In the works I’m creating for the Crown Jewel Project, I am magnifying and exaggerating my processes to reveal what is deep inside them that makes them so important, vital, and seductive to me as an artist. These actions and labors of making in my studio: the repetitive and tactile processes of mark making, weaving, counting, painting, rinsing, tying, etc. are cumulative, building gestures and intense personal meditations. My Crown Jewels are meditation objects that contain all those actions and all that doing: they are precious texts made of handwoven cloth. With each new piece in the series, and even within single pieces, the meaning of the project continues to morph and grow. Patience is one piece in this series of “scarves”: it is over 55 continuous feet of handwoven cloth, or the approximate amount of cloth usually required to make an entire series of functional scarves in my studio. This piece revels in, even demands, the luxury of time and an entirely uncompromising making process. I’ve used every slow, inefficient, and complex process involved in creating a textile by hand in order to create what could essentially be called yardage of a decorative “repeat” pattern. The labor involved in the painting and dyeing processes, not to mention the weaving itself (which was done with a superfine linen thread hand-twined with a hair-fine copper thread), is excessive. The result is a gorgeous cloth. Once I removed it from the confinement of the loom I realized that it is both its own finished object and a new kind of raw material. Off-loom, it has become alive, and I must now contend with questions of how to deal with a textile like this: one that is given the name of scarf, one that is also a painting, a pattern, and a very substantial bolt of cloth.   It makes sense that it should exist as fluidly in physical space as it does in name.

This is where I am today with Patience: it’s becoming installation, requiring a sensitivity to its qualities as both beautiful textile and conceptual vessel. Like the physical repetitive processes that created the cloth, its exhibition should be accomplished with the same language: wrapping, twisting, draping, tying. I can see it living in many different arrangements, a fluid thing, both on its own and as part of the larger Crown Jewel Project. This body of work will continue, as a collection of textile texts, to write its own meaning. It seems I will always be learning this language.

Note: The Crown Jewel Project is funded by a Windgate Fellowship Project Grant, made possible through the generosity of the Center for Craft, Creativity and Design in Asheville, NC.

MORE IN THIS ISSUE

Elegy for My Child / Current

The Devotion of St. Teresa of Ávila