A Christian Feminist Weighs in on Reproductive Rights

I’d like to weigh on matters of faith and reproductive rights.

The Supreme Court will soon decide whether to uphold the Affordable Care Act’s so-called “contraception mandate” or to offer exemptions for religious, for-profit businesses like Hobby Lobby. I’m content to let the justices interpret the Constitution; however, as a progressive Christian, I’m also entitled to my interpretation of the Bible.

I live in one of the wealthiest counties in the nation, yet my faith community puts me in regular contact with homeless people and families who live well below the poverty line. Nearly five years ago, an Afghan refugee family sought our community’s help. It was this experience that solidified my strong feelings on reproductive choice.

At the time I met her, Azin* was a 27-years-old mother of three children who had an eighth grade education. Her husband’s hourly wage barely covered the rent.

Azin wanted to attend school to learn English in order to find a better paying job to help support her family, but her youngest was an infant.

Being a small congregation, we didn’t have the means to address all of the family’s financial needs. Our outreach committee felt we could best help the family in the long term, by assisting with Azin’s education. We raised funds that were matched in part by a national religious non-profit organization. We paid tuition for ESL classes through the local community college. We covered babysitting expenses when county funds ran out.

While driving Azin to and from classes, I heard more of her story. She had married at 16 in Afghanistan, where the Taliban threatened to rape unmarried girls. After fleeing the country at 18, she and her husband lived in a refugee camp in Turkmenistan. While there, she had two children. The UN then relocated them to the United States where they had no family and didn’t know the language. After settling in the US, she made the decision not to wear the hijab in order to distance herself from the Taliban’s zealotry, a decision that inadvertently estranged her from many in the local Afghan refugee community.

Born a white woman in the United States to college-educated parents, I know that I had huge advantages over Azin. After earning a BA, I married and started working. My first employer did not cover contraception, but I had access to affordable options through the local Planned Parenthood. I left the workforce when my daughter was born and could afford to attend graduate school while staying home with her.

Azin was ten years younger than I with few material resources. I admired her tenacity and looked for ways to help. I passed down my son’s clothes as he outgrew them, so she could use them for her youngest son. I tutored her daughter in reading one summer. These acts seem small in comparison with the advantages I had by virtue of my birth and ethnicity. Every action that I took to help her humbled me; I did not deserve to have all of the privileges that I had anymore than she deserved her circumstances.

Azin appreciated every small sacrifice. And I discovered that when I had the opportunity to minister to her, I felt a sense a purpose that was far more rewarding than the everyday reality of changing dirty diapers and chauffeuring a preschooler – a reality that in and of itself was a privilege.

“Would you forgive me if I had an abortion?” she asked over the phone one afternoon, three years after I first met her. She feared she might be pregnant.

I paused, holding the phone between my shoulder and ear. I assessed the situation: having another child would stretch the family’s already meager resources and slow her already part time studies. Azin loved her children; she wanted more than anything to make their lives better. I knew how hard it was to attend classes with young children. She was working so hard in a world where the deck was stacked against her. I understood this.

Taking a deep breath, I reassured Azin that her body was her body, not mine. When we got off the phone, I went out and bought her a home pregnancy test to take until she could get an appointment to see a doctor in a low-income clinic.

She wasn’t pregnant. She didn’t have to face that decision, but it did bring to light a huge flaw in our congregation’s mission efforts. It’s nice to compartmentalize a person’s needs: food, shelter, healthcare, education; yet in the end, they are all connected. In order to get an education and find a job to help support her three children, Azin needed reproductive rights. 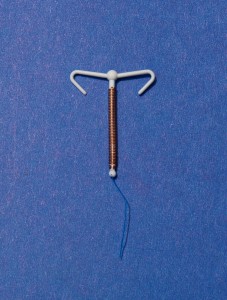 When I approached our pastor about the pregnancy scare, he offered to pay for condoms out of discretionary funds. I thanked him on Azin’s behalf, but silently wondered about how practical a form of contraception it was for a married couple. Eventually, I came up with a different solution: I would pay for an IUD device that would be effective for five years.  I know in my heart that my pastor and outreach committee would have paid for this if I had asked; however, it was something I wanted to do – to offer Azin the same reproductive rights that I was afforded so easily.

Today, Azin is still attending ESL classes with the help of a Pell Grant. She hopes to eventually become a dental assistant. Her youngest son participates in Head Start and will begin kindergarten next fall. They have a long road ahead. Azin’s desire for an education has inspired her children to do well in school. In the coming years, I look forward to helping her prepare for job interviews and attending her children’s high school and college graduations. She is a blessing in my life.

Having Azin as a friend has solidified my views on faith and reproductive rights: access to birth control helps women shape their futures. For my Christian peers who feel that reproductive rights are contrary to what the Bible teaches, I would point to Jesus’s choice to heal the sick on the Sabbath against strict religious codes of conduct. When the Pharisees approached Jesus about stoning a woman accused of adultery, as per Jewish law, Jesus responded by saying that anyone without sin should cast the first stone. The New Testament contains many more examples of Christ ministering to people rather than upholding dogma.

Paying for Azin’s contraception was one of the most feminist and Christian acts of my adult life; and I will happily continue to support her as she exercises her reproductive rights.

*Not her given name

Wendy Besel Hahn has an MFA in Creative Writing from GMU. Her nonfiction has appeared in Front Porch, Chaffey Review, and The Journal of the Virginia Writing Project. To find out more about her work, visit her website: www.wendybeselhahn.com.

2 thoughts on “A Christian Feminist Weighs in on Reproductive Rights”